Wiki Ippo
Register
Don't have an account?
Sign In
Advertisement
in: Characters, Male Characters, Characters from Thailand,
and 8 more

Aaron had an upcoming OPBF lightweight title defence match against Ryō Mashiba. When the match arrived, Aaron went to the Kōrakuen Hall. When the match began, Aaron was shocked by Mashiba's range of his Flicker Jabs, and was hit multiple times by the technique. Aaron had trouble getting close to Mashiba until the fifth round, where, after getting hit by Flicker Jabs and a Chopping Right while moving towards Mashiba, Aaron finally got into close range. After headbutting Mashiba's chin, Aaron repeatedly hit Mashiba with body blows. Aaron repeated the same tactic throughout the match, and, in the eighth round, Aaron struck Mashiba with a combination after hitting his chin with a headbutt, making Mashiba go down while he tried to throw a punch. The referee declared the down as a slip. After Mashiba got up, Aaron got into close range against Mashiba at the ropes. Aaron struck Mashiba's chin with his shoulder and hit him with combinations until Aaron was hit with a left that made Mashiba escape the ropes. As Aaron's foot made Mashiba lose balance as he almost tripped, Aaron took the opportunity and hit Mashiba with a left hook, causing him to go down. After Mashiba got up, the eighth round ended. In the ninth round, Aaron did the same tactic of getting into close range and hitting Mashiba with body blows. Having pushed Mashiba to the ropes, Aaron landed a left hook as Mashiba tried to fight back. Aaron's attacks made Mashiba's legs start to give out as the ninth round ended. When the tenth round began, Aaron made his way to Mashiba, preparing the guard against his Chopping Right as he saw it coming. However, Mashiba quickly changed the Chopping Right into an uppercut, and Aaron was caught by surprise as he got hit, causing him to go down. The referee ended the match immediately, resulting in Aaron losing the match and his title to Mashiba.

Being a former OPBF lightweight champion indicates he is a highly skilled boxer.

Having a high amount of knockouts in his record assumes that he has powerful punches. Being able to take an exceptional fighter like Mashiba into the tenth round while getting hit by Flicker Jabs and Chopping Rights shows that Aaron has a great amount of stamina and is highly resilient.

Aaron is an in-fighter who uses the orthodox stance that has his body leaning forward with his guard up. Being an in-fighter, he takes a liking to fighting at close range, and is the first to rush out towards his opponent. Aaron uses mostly close ranged hooks and body blows, while also being able to combine them with fouls such as headbutting, tripping, and hitting opponents with his shoulder without the referee noticing.

Even though he did not go against a Hitman Style user like Mashiba before, Aaron was able to use a tactic of moving forward with his guard up against the Flicker Jabs until he reached Mashiba, and put his head on his chest while hitting him with body blows, which worked for multiple rounds. 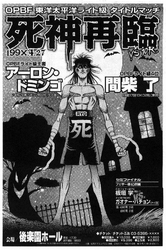 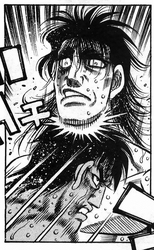 Aaron headbutting Mashiba during the match. 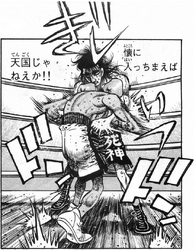 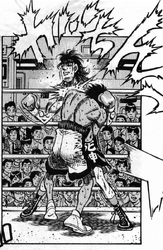 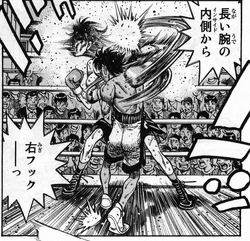 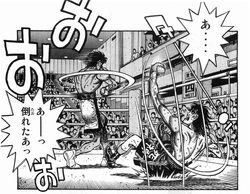 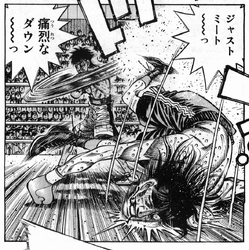 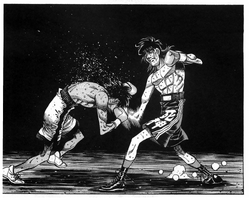 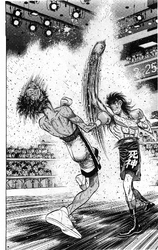 Mashiba turns things around with the Anti-In-Fighter uppercut. 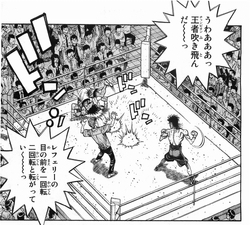