He is a former featherweight professional boxer and Makunouchi Ippo's first Mexican opponent (as well as the first non-OPBF opponent), and the second person to defeat Ippo in a boxing ring. People in his hometown and around Mexico thought that he will be the next world champion, in the WBA division.

Alfredo grew up in the slums of a dangerous neighbourhood in Mexico City where he got involved with street fights. Alfredo was invited to the Arena México, where the world champion Ricardo Martinez would invite the poor youth to watch his matches. Though, at first, Alfredo did not feel the same way when he sat when watching the champion, as in his mind he had the champion as this egotistical rich individual who had it all and was inviting them there just so he could show off.

At some point, he witnessed Ricardo fighting a strong challenger.[4] The victory was such an inspiration for him that before he knew it, he got up on his feet with both hands up in the air. Following up the moment that struck him the most though was what was said after the match by Ricardo. For the boys of the nation to not forget what true "Machismo" means. Alfredo at that very moment understood instantly Ricardo's intentions, and thus his everyday goal had begun, with the only place to meet him being the ring. Climbing the way up with courage and hard work, something which stayed in Alfredo's mind, words like that of an "Aztec God" would say. From looking at Ricardo's matches, he saw how Ricardo helped people after his matches by interacting with the crowd more than other boxers. Ricardo became the light that helped Alfredo become what he is now. Alfredo always looked up the sky searching for "the light" to guide him.

He was introduced to boxing at a young age by his coach, who found him in the streets leading a gang of other children.[5] Alfredo was brought into the Olympics to box, however, his brutal fighting style led him to be expelled. He was then brought into the professional ring, where he earned the nickname, "Metztli" after his bloody victories. Eventually, he climbed through the world rankings quite fast and achieving his childhood dream to be in the same ring fighting against Ricardo. The first time he faced Ricardo he was so tense that it barely was a fight. The second time they fought was even worse, taking him the furthest since he reverted to using his original fighting style, forcing Ricardo to get serious and fight technically against Alfredo's rough and violent style, which in return after the match he had woken up in a hospital. He continued his career with the same goal in mind, staying in the world rankings for most of his career for a chance to come again in the future.

Moving forward with his goal to challenge WBA featherweight champion Ricardo a third time, Alfredo agreed to go to Japan to fight Makunouchi Ippo, with the winner to face Ricardo in the process as the preliminary world title challenge. As the match was decided, Alfredo spoke to the champion himself over the phone, to have him consider a second rematch with the condition being if he defeats Ippo, his challenge will be accepted. While Ricardo did not recall who that is, Alfredo implied that the match with Ippo is part of the process to become ranked first to get Ricardo to accept the request. Later, as Alfredo and his girlfriend Lisa go through a crowded market street to reach the park with a great view of the city, Alfredo grabbed a young boy who stole food and took him with him to apologise together. When they reach the park's viewpoint, Alfredo reflected with Lisa how he was once like that boy, stealing whenever he was capable to and with any disagreement, he would resort in violence as if it was a natural response. As Alfredo recalled his memories of Ricardo and Lisa tried to get him to not obsess over the WBA title, Alfredo claimed that he cannot back out as he must face the strongest in the world, as that is what "Machismo" means to him.

Immediately right after arriving to Japan, he was taken to the Otowa gym, where he sparred with ease the opponents he is given. As Alfredo shadow boxes in the ring, the gym's top boxer Imai Kyōsuke glared at him, which Alfredo noticed. Later that night at his hotel, Alfredo expressed his need to land a right, saying that all the sparring partners were weak with the exception of that man looking at him who looked very promising. Alfredo requested for his coach to let him spar with the man, but his coach replied to save it for now since all the stress and power will explode in the main match.

On the day of the weigh-in, Alfredo arrived to the Kōrakuen Hall, where he meets with Ippo. Alfredo gave his comment to the press, saying the same words of what he thinks Ricardo would have said, that he wouldn't expect too much from him, and that when the match begins, everyone will know what he means.

The next day, Alfredo returned to the Kōrakuen Hall for his match against Ippo. Alfredo left for the ring for his match with the determination to not let Ippo reach and face Ricardo. When the match began, Alfredo was able to keep Ippo away with his lefts for some time until Ippo closed in on him by using head slips while in his Peek-a-Boo Style. Alfredo had successful attempts to counter the strategy by using uppercuts, however, Ippo was able to dodge and throw a body blow which Alfredo blocked at the end of the round one. In the corner, Alfredo was told by his coach to not let his bad habits pop up since he successfully laid out the bait for Ippo. In the second round, Alfredo's lefts were dodged and, after blocking Ippo's body blows, he was put up against the ropes. As he was approached by Ippo, Alfredo throws a left that gets dodged, however, it was a bait for his right, which lands on Ippo's forehead. After another punch lands on Ippo's forehead, Alfredo was hit by a liver blow. After the liver blow, Alfredo and Ippo entered an exchange, with Alfredo landing the most punches until the second round ends. At the corner, as his coach becomes worried that Alfredo is falling into his bad habits, Alfredo reassures him that he is calm.

In the third round, Alfredo began out-boxing, attacking for afar with lefts. Alfredo was chased, and when he sends out his uppercut and one-twos when Ippo gets close, they get dodged. After sending out a barrage of lefts that get blocked and land occasionally, he was forced into a corner. Instead of sending out a one-two, Alfredo hit Ippo with a long left hook, sending him down. When Ippo got up, Alfredo stayed away as Ippo stood in place and punched wildly until the third round ended. In the corner, while his coach warned him that Ippo may recover well and come to Alfredo with a plan to show the way he got his world ranking, Alfredo planned to Ippo the meaning of world class.

In the fourth round and to the end of the fifth round, Alfredo beat on Ippo while taking no hits. At the corner, Alfredo's coach gave him the permission to do whatever he wants for the rest of the match, making Alfredo excited. Ippo motioned the Dempsey Roll in front of Alfredo in round six. Alfredo tried to hit Ippo in the motion while Ippo was unable to land any clean hits. Just as Ippo tried to counter one of Alfredo's attacks with the Dempsey Roll, Alfredo pressed his body onto Ippo's, stopping the Dempsey Roll. A close ranged exchange followed and, after winning at first, Alfredo got hit with a glancing uppercut which rattled his brain, causing Alfredo to go down soon thereafter. After Alfredo got up and Alfredo blocked a liver blow, the sixth round ended. At the corner, Alfredo was ordered to keep using Metzli Mode and to remember that he has flown closest to Ricardo, the Quetzalcoatl.

In the seventh round, the boxers enter yet another exchange which Alfredo eventually lost. However, as Ippo went for the finishing blow, Alfredo landed a powerful right counter, sending Ippo to the canvas unconscious. When Ippo's seconds ran into the ring to help Ippo, the referee signalled the end to the match, resulting in Alfredo's victory. Alfredo became annoyed when he sees Ippo being able to walk on his own despite the amount of hits he gave him. As his coach offered his shoulder for him to lean on as they walk away from the ring, Alfredo wished to go back home to Mexico proudly.

Alfredo is slim, pale-skinned, with sleek black hair. His forward bangs are parted on the left side. He has a long straight nose and sharp eyes, whose brows are always slightly furrowed.

As for his training look, he wears sharp-style sunglasses.

When he first arrived at the gym in Japan, he was polite to his sparring partners and also really calm. He even said that Japanese people are really polite and good, but it turned out that his politeness was masking an aggressive and ruthless personality.

By the 6th round during his match against Ippo, the look on his face changed completely to a highly aggressive look, about right after Ippo started using the Dempsey Roll. He has his hidden side famously called "Metztli" by others, consisting of a brutal nature in the ring and the bad habits of his, which also earned him the nicknames "Mexican Grim Reaper" and "Death God".

Alfredo is a well-rounded hybrid boxer with an effective, long-range jab. His main strategy is to use his jab to both distances himself from his opponent and stay on offence via counter punching. When the situation calls for it he can in-fight effectively. With the experience he possesses from two world title matches, he is adept at outsmarting his opponents with world-class boxing strategies, such as using his jab and short upper to set up a one-two, to later execute a long hook (when the opponent is not expecting an attack from the side). It is said that his boxing is a mirror image of Ricardo's and that he would likely be the world champion already if Ricardo wasn't in sight.

Alfredo has "bad habits" which he forcefully seals away in his boxing matches. They are essentially a tendency to want to brawl. "Metztli" takes over when Alfredo is overcome with rage and anger from extreme exhaustion such as fighting very closed. According to his trainer, in this mode, Alfredo's offence is greatly increased, but his defence is lowered considerably, making him vulnerable to attacks. The problem with this style is that Alfredo is not a naturally tough boxer like other brawlers. Despite this, "Metztli" enabled Alfredo to push Ricardo in his rematch although it ended up sending him to the hospital, as Ricardo also has a vicious style which is his real form that is more controlled than Alfredo, which it's only used for worthy opponents.

Though Ippo never exploited any weaknesses in Alfredo, it is mentioned by Alfredo's coach that he is a fragile fighter.[8] For this reason, his all-out offensive bad habits are actually a "double-edged sword." 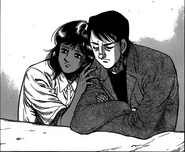 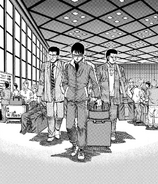 Alfredo at the Airport

Machismo means to him 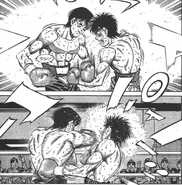 Retrieved from "https://ippo.fandom.com/wiki/Alfredo_Gonzales?oldid=75062"
Community content is available under CC-BY-SA unless otherwise noted.