Wiki Ippo
Register
Don't have an account?
Sign In
Advertisement
in: Characters, Male Characters, Characters from the Philippines,
and 10 more

Antonio Guevara (アントニオ・ゲバラ, Antonio Gebara) is a professional boxer from the Philippines and the Filipino featherweight champion. He is the third man and last to have defeated Makunouchi Ippo.

Born in the poor slums of the Smokey Mountain in the Philippines, Antonio's life was collecting junk and other materials that could be sold in junk shops in order to help his family that were in heavy need. He supported his parents and six siblings every day with this job.

One day, he convinced himself that it was not enough, and if possible, to help the rest of the town as well, he introduced himself to boxing. As he made his way to the national rankings, the young Antonio challenged long reigned champion Malcolm Gedo and defeated him, as well as dominated him fairly by an unanimous decision. He became the new featherweight champion of the Philippines.

Antonio travelled to Japan for his upcoming match against former JBC champion Makunouchi Ippo. When the press conference arrived, he went to the Roigal Hotel, where he met Ippo. He offered a handshake to him during their stare down. Antonio used his left hand to greet his opponent due to his instincts as a natural Southpaw.

On the day of his match against Ippo, Antonio went to the Ryōgoku Kokugikan. When the first round began, Antonio used right jabs and speed to keep Ippo out of range and prevent him from in-fighting. When Ippo got close to him, Antonio threw a left straight, Ippo however, ducked under his left straight and Antonio was hit with a Solar Plexus Blow. Antonio was then hit on the face, causing him to go down. When Antonio got up, Ippo dashed out of the corner. Antonio was told by his seconds to throw jabs like before, but when he did, Ippo slipped through. Despite Antonio's defence, he was forced back to the ropes. Antonio threw a straight, however, Ippo avoided it and set up for the new Dempsey Roll. Antonio guarded against the new Dempsey Roll, however, he fell during it, causing a slip to be declared. When Antonio got up, he threw right jabs to keep Ippo away. When he was approached by Ippo, he clinched him. However, Antonio was hit by a liver blow, causing him to break the clinch. Afterwards, the first round ended. Antonio decided to keep Ippo away by using jabs and wait for an opportunity.

In the second round, Antonio began using his range against Ippo by hitting him with multiple right jabs while backing away. As the second round continued, Antonio was surprised by Ippo's flexibility as he blocked his powerful punches from different angles when Ippo got close. Antonio decided to stay and attack, causing both boxers to enter an exchange where neither landed a direct hit until Antonio was hit with a right to the face, causing him to go down. When Antonio got up, the second round ended. At his corner, Antonio requested for his seconds to stop the blood coming from his nose, and, since they can't stop the blood in his mouth, he planned to swallow it. His seconds tried to get him to forfeit since Ippo is too strong and they are on foreign land, however, Antonio wanted to continue, as he wants to go home with his head held high.

In the third round, Antonio and Ippo traded punches in an exchange. During the exchange, Ippo tripped over Antonio's foot and was sent rolling on the mat, causing a slip to be declared. When Ippo got up, Antonio and Ippo continued their exchange. When Ippo got closer, Antonio threw a right hook, which barely hit Ippo, however, it caused him to go down. When Ippo got up, Antonio tried to keep him away with right jabs, but Ippo got in range. Antonio guarded a strong right hook that pushed him to a corner. Antonio proceeded to block Ippo's barrage of punches at the corner until he hit him with a counter. With Ippo stunned, Antonio escaped from the corner, and the third round ended as he blocked an attack. In the fourth round, Antonio attacked Ippo's guard with right jabs. As Ippo got closer, Antonio threw a left hook that connects at the same time as Ippo's foot got caught on Antonio's, causing Ippo to go down. When Ippo got up, Antonio began blocking his punches until he was pushed to the corner. While blocking Ippo's punches at the corner, Antonio threw a left hook. Antonio's attack barely grazed Ippo's head, however, as Ippo was throwing a punch, his knee hit the canvas, causing a down. When Ippo got up, Antonio exchanged punches with him, however, Antonio went down twice. After the second down, Antonio and Ippo exchanged punches until Antonio was put into a corner. As Ippo came at him with his new Dempsey Roll, Antonio countered him with a left, causing him to go down a third time, ending the match in Antonio's victory.

Antonio is a man who has a fit tanned skin toned body. He has black hair in a short hairstyle and has thin eyebrows.

Antonio has an easy-going, confident attitude. He's willing to fight anyone in order to achieve his goal, to bring back money for his family. He has shown to be very kind and good hearted. He has not shown another side of his personality, even in his match against Ippo, he showed less fierce look than Ippo while fighting.

Antonio is a skilled southpaw out-boxer who commonly uses right jabs and straights and is good at dodging and blocking punches. Antonio has enough punching power to knock Ippo's head back with a jab. He is shown to have quick reflexes as he leans back to avoid a direct hit from Ippo. Antonio uses his foot to block the in-fighting method of ippo. 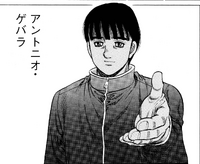 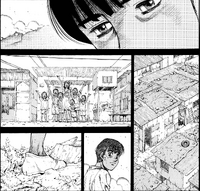 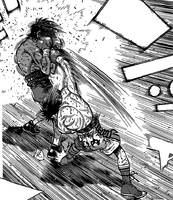 Antonio getting hit by Ippo's swing. 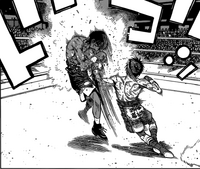 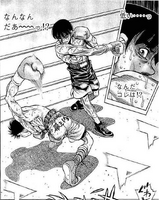 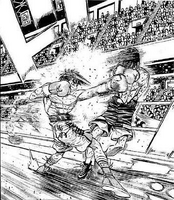 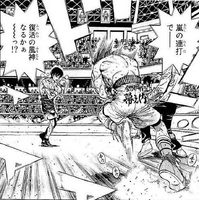 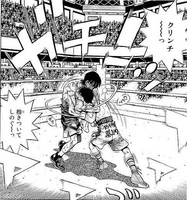 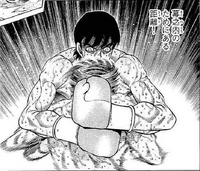 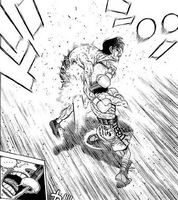 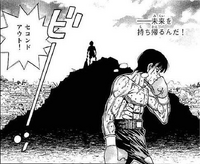 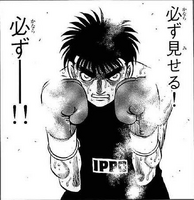 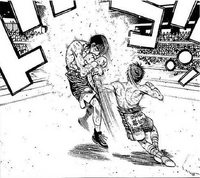 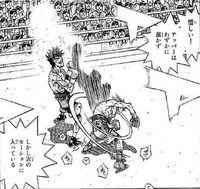 Gedo down first round 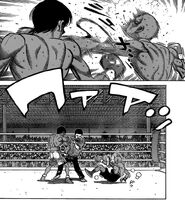 Antonio VS Malcolm.
Community content is available under CC-BY-SA unless otherwise noted.
Advertisement