Taihei Aoki (青木泰平, Aoki Taihei) is a recurring character in Hajime no Ippo.

He was the leader of a group of delinquents at his school. He became Makunouchi Ippo's first disciple and later joined the Kamogawa Boxing Gym.

When Taihei was in elementary school, he went to see his older brother off, but all he saw was a laughing stock. This broke his spirit and from then on, he began getting into fights. Years later, Taihei became a leader of a delinquent group. He was the most feared in his group by other students in high school, with no one wanting anything to do with him. 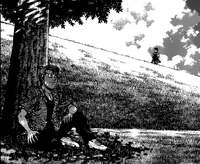 Taihei and four other delinquents walked up to Teru Okazaki] and began beating him up, until Ippo appeared and threw Taihei to the ground by his shoulder. Before the delinquents beat Ippo up when he begged the delinquents to leave, Taihei ordered the group not to fight, as he senses something off with Ippo. Taihei asks Ippo for his name before he and his group leaves.

Days later, after asking residents where Ippo is, he learns that Ippo runs on the riverbank every morning, so Taihei waits for Ippo to show up. When Ippo shows up, Taihei watches Ippo's shadow boxing. Amazed, he shows Ippo his shadow boxing. After Ippo begins to leave, Taihei chases Ippo, asking to be taught boxing, until he falls down. Taihei is then asked why he wants to box and why not go to a gym, which Taihei replies he always liked boxing and wants to become pro immediately, a gym would just tell him to wait before becoming a pro. Taihei then finds out that Teru has talked to Ippo about how he bullied him. Taihei then asks to be taught boxing, which Ippo refuses, as he doesn't trust Taihei's word or fists. When Taihei states that he quits being a delinquent, he is asked to apologise to Teru. He later apologises and waits at the riverbank for Ippo. When Ippo arrives, Taihei tells him that he's serious.

His main reasons of training was to commence an attack against another group of delinquents known to be good at brawling, or having certain types of skill.

Taihei has shown a lot of potential in his training with Ippo, as he's one of a few who managed to keep up with him, if not the only one. Since he is a delinquent, he was surely involved in a lot of fights, making him the way he is. He has shown to be very skilful in terms of street fighting. As Ippo trains with him, he notices his swings a lot, leaving his body wide open weak for counters, explaining to him one of his first mistakes.

His first major weakness showed itself quickly during the first run. Taihei has very little stamina and runs out of energy quickly as he grew tired after just going to the river bridge. He has improved somewhat after a few runs but still has trouble around the river area.

He learned to snap his fists faster than Ippo did in the past, learning how to do jabs.

He gets excited when he is about to punch, itching to hit, wild instincts that a fighter would have. By training with Ippo, he is eligible to improve.

Taihei has the eyebrows like his brother but his hair is blonde and shaped into a pompadour although he has since shaved his head so he is bald currently. He has a slightly muscular build but has grown slightly more due to Ippo’s training.

His personality is very boldly shown, as very ruthless and wild. Eyes of murderous intentions, itching to be involved in a fight.

Despite his fierce personality, he also has a rather good side hidden inside him. He has shown signs of blushing or being extremely happy, even acknowledging Ippo as his training master, happily accepting being his disciple.

Taihei is very similar to his brother as he loves to fight but while Maseru was content on simply causing some chaos with Kimura, he was in it to destroy everything. This changed after getting hit by Ippo as now he learns to fight for his own reasons other than destruction. 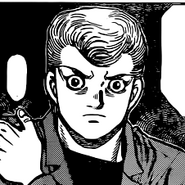 Taihei's Motives
Add a photo to this gallery

Retrieved from "https://ippo.fandom.com/wiki/Aoki_Taihei?oldid=69784"
Community content is available under CC-BY-SA unless otherwise noted.