He is a boy in a wheel chair, who had been hospitalised, and cheered for Makino Fumito.

He was hospitalised for a long time in a hospital that was near a park where Makino Fumito trained. While watching Makino run each day from his window, Atsushi became interested in him when he was trying to relieve his boredom. He decided to ask Makino if he was strong. When Makino didn't answer, Atsushi revealed to him that he watched him every day and believed that he was hard working and was sure he would win.[1]

Atsushi met Makino outside the hospital while he was training and gave him a towel. Makino wanted to know if Atsushi was still depressed about his surgery, while Atsushi wondered if Makino was depressed about his upcoming match since his opponent was strong. Makino agreed, which made Atsushi feel he should be worried about himself instead. As Makino wished to show Atsushi that anything was possible if he kept trying and promised that he would win in order for Atsushi to do his best for his surgery, Atsushi agreed and went inside the hospital.

When Makino's East Japan Rookie King Tournament semi-finals arrived, Atsushi went to the Kōrakuen Hall and met him before going to watch the match. While watching the match, Atsushi dropped from his wheelchair as he called for Makino to get up after falling for the first time in the second round. Atsushi watched as Makino later lost in the second round. Even though Makino lost, Atsushi expressed to him that he was no longer scared of the surgery after seeing Makino fight. 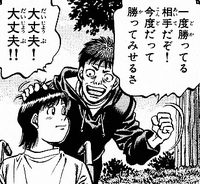 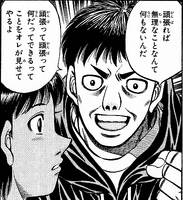 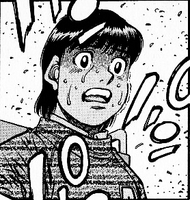 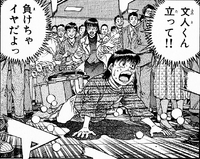 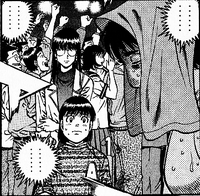