Wiki Ippo
Register
Don't have an account?
Sign In
Advertisement
in: Characters, Male Characters, Characters from America,
and 2 more

Omoro Masayuki
Bill Stewart (ビル・スチュワート, Biru Suchuwāto), occasionally referred as Bill Martin is the trainer and manager for Ricardo Martinez and Jose Nargo. He is a world renowned trainer that has trained up to seven world champions (including Ricardo.)

When WBA featherweight super champion Ricardo Martinez was to go against Japanese boxer Date Eiji a second time in his 18th title defence, Bill arrived with Ricardo to Tokyo. Bill went with Ricardo to the Otowa gym for a public sparring session that included the JBC featherweight champion Makunouchi Ippo. When it was Ippo's turn to spar, Bill instructed Ricardo to handle the spar however he liked, but to show the audience the difference between Japan and the world. After Ricardo effortlessly hits Ippo with lefts and stops his Dempsey Roll, Ricardo walked away and told Bill who then explained the reporters that Ricardo has no intention of destroying the pride of the Japanese champion, simply wanting to warm-up his left, and any more than that would be pointless. After the spar, Bill commented how surprised he was to see someone in Japan able to use the Dempsey Roll and that the Japanese champion had a good amount of power, wondering if Ricardo felt a chill down his spine before apologising for asking a "stupid" question since he believed no matter who Ricardo fights or what they use, Ricardo has no reason to feel agitated. Later, Bill attended the press conference between Ricardo and Date.

When Ricardo's 18th title defence match against Date arrived, Bill was his cornerman for the match. Prior to the match, Bill told Ricardo he won't give him a strategy, asking to destroy him with technique and experience, and to show the people of Japan the true magnificence of boxing. After the first round, Bill noticed that Date had levelled up since the last time, but since Ricardo had as well, Bill instructed him to prove the strength difference had not changed in the second round. After the second round, Bill believed that Date probably had experience against fighters with very strong punches, with the experience being the reason that he was brought this far. After the eighth round, Ricardo wondered why Date still stood after taking so many punches. Bill replied to have confidence in his punches, believing that Date probably reached his limits, but he felt that Date has miraculous toughness, as if he has something that holds him up past his physical limits, like the dream to become world champion or revenge against Ricardo, however Ricardo disagreed. After Ricardo blocked Date's Heart Break Shot, breaking Date's fist in the ninth round, Bill wondered if they still planned to fight, deeming it foolish for his second to allow him to continue. The match continued into the tenth round where Ricardo downed Date and won the match by knockout, defending his title for the 18th time.

Bill was Ricardo's second when he fought an American in his 21st WBA featherweight title defence, winning and defending his title in the first round by knockout.

Ricardo received a call from Alfredo Gonzales before Alfredo's match against Ippo, requesting for Ricardo reconsider a second rematch between them if he defeats Ippo. Ricardo, however, did not remember who Ippo was, as he does not remember every name of fighters he has sparred with. After the call, Bill reminded Ricardo that Ippo used the Peek-a-Boo Style, causing Ricardo to finally remember who Ippo was.

With Bill's boxer, the Mexican featherweight champion Jose Nargo, having a match against Sendō Takeshi, Bill went to the Yokohama Arena to be Nargo's chief second for the match. During the first round, Bill quickly recognised Sendō's tiger features, comparing him to a sabre tooth tiger and wanting Nargo to show how the species became extinct. The match resulted in Nargo's loss by knockout in the eighth round. Bill planned to tell Ricardo about Sendō, seeing a match between the two likely. As Sendō requested for Bill to tell "him" back in Mexico that he would see him soon, Bill assumed he meant Ricardo and agreed to Sendō's request. However, Bill was shocked to discover that Sendō meant Alfredo.

Before going back to Mexico, Bill was asked to comment about Sendō's request to fight Alfredo by reporter Īmura Mari. Bill replied that Alfredo is not one of his boxers, so he wouldn't see him when he goes back.

In preparations for Ricardo's next WBA featherweight title defence match, Bill went with Ricardo to the J.C. Gym for a public spar, where Bill was his second. When Sendō arrived to the gym wanting to spar against Ricardo, Bill let Ricardo know Sendō's ranking, causing Ricardo to be interested in sparring with him. Bill allowed the spar of three rounds. When Sendō downed Ricardo, who has never been downed in his entire career, Bill tried to stop the press from taking pictures and told them and Alfredo that Sendō leaned on Ricardo while throwing a punch, causing him to lose his balance. As tensions between Sendō and Alfredo raised, Ricardo offered the two to fight in a semi-final match for his own title defence match in Mexico City, offering the winner a title match against him, which Bill voiced his dislike of Ricardo making the decision. Driving away from the gym, Bill asked Ricardo if Sendō really did hit him, to which Ricardo thought it didn't matter. Bill revealed to Ricardo that he heard from a reporter that Alfredo and Sendō both fought against Ippo, who pushed Date in a match before, which he thought was good information.

When the weigh-in for Ricardo's 22nd WBA featherweight title defence match arrived, Bill went with him to the Arena México. The next day, Bill went with Ricardo to the Arena México and watched Sendō and Alfredo's match in his dressing room. Before the match began, Bill criticised Nargo's claim that Sendō's destructive power is the best in the world, thinking it as rude to say in front of Ricardo. While watching the third round, Bill mentioned how Sendō is a shining example of Machismo, and began to do mitt practise with Ricardo.

When Ricardo's 22nd WBA featherweight title defence match against the former WBC featherweight champion Billy McCallum began, Bill was Ricardo's chief second for the match. In the first round, Bill recognised McCallum's stance as the Detroit Style and saw McCallum as the real deal since he is from Philadelphia, where the Detroit Style got it's name "Philly Shell" from, thinking that it will be hard for even Ricardo to break the clam shell-like guard. As Ricardo attacked McCallum's left arm until the guard broke, Bill saw that if one can't pry it open, they can just smash the shell. After the match ended in Ricardo's victory in the first round, Bill gave Ricardo his belt before walking away from the ring.

Despite Ricardo announcing to Sendō and Alfredo that he would give the winner between them the right to challenge him in his next title defence, it was decided that, instead of Sendō, Ricardo's next match is against the third ranker in the WBA and a former Indonesian champion, Wally. Bill informed Ricardo of Wally's record and details of how Wally fights, along with his likeness of boxing. Ricardo asked about his one loss, which Bill answered that it was from Ippo.

Bill has the appearance of a middle-aged man with white short hair. He wears brown tinted shades.

Bill is somewhat of a cocky and intelligent trainer, just judging by the fact that when Ricardo was going up against Date he wasn't worried much. However when Ricardo hesitated to finish Date due to the fact that an unfortunate accident could occur, he demanded that Ricardo finished him. During the Jose Nargo vs Sendō Takeshi match, Ippo comments that Bill is known for being a great tactician. He believes the perfect boxer is a combination of science and violence. He mentioned that he felt elegance and technique aren't enough to claim the world, and that there are times when savageness to coat the ring in blood is required. 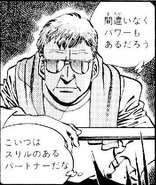 Bill during Martinez vs Ippo spar 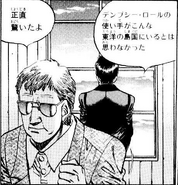 Bill talking to Martinez about Ippo 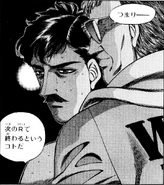 Bill talking to Martinez to show Date their difference

Bill trying to give Martinez confidence 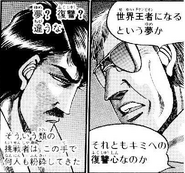 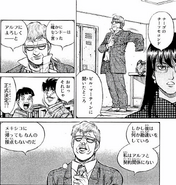 Martin talking to Mari about Sendo wanting to fight Alfredo 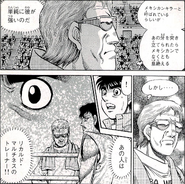