He is a retired professional boxer and former WBC junior middleweight champion from United States of America, who was scouted by world renowned boxing trainer, Miguel Zale while defending himself from thugs in the streets of his hometown.

He had won the world title and the rest of the fights with incredible ease due to his physique and natural talent as he barely trains, spending more time with women than in the ring. Being a fairly new champion, his unlucky fate came up for his first title defence, against the "Japanese Hawk", not caring at all to know the name of the fighter he's fighting.

Hawk was dethroned, to the core broken mentally, unable to ever step inside the ring ever again.

Hawk grew up as a street urchin in the tough slums of New York. He was raised in life-or-death street fights, every day there was a fight for survival and only the strongest walked out alive. He survived against pistols and knives with just his fists countless times. One day Miguel Zale encountered Hawk in an alleyway. Hawk was shown running and being cornered by a man with a gun, but emerged victorious nonetheless with the man's unconscious and bloodied body in his hand. Hawk then continuously beat the man despite the latter being unconsciousness; Miguel watched everything from the street. When inquiring on why Miguel was watching him, the latter stepped up to stop Hawk from potentially taking a life, to which he responded that it's too hot, as if his body was burning from the inside, and that the only way to stop this feeling was to execute more violence or be in bed with women. Realising Hawk's ecstatic love of fighting and violence at this point, Miguel pondered what would happen if he set Hawk loose in the boxing ring, and lured Hawk to join the world of boxing by claiming that the sport would give the latter forgiveness in unfortunate circumstances such as murder, which Hawk interpreted as a 'license to kill'.

Gleefully, Hawk followed Miguel and, over a short period of time, brutally made his way to become the WBC Junior Middleweight Champion. During this time, he was unaware that David Eagle was watching his rise through the ranks and formulating a strategy against him should Hawk decide to step up a weight class.

Reigning undefeated, Hawk is matched with the "Japanese Hawk" and "KO King" Takamura Mamoru for his first title defence.[1] Hearing that his opponent is Japanese, Hawk immediately underestimates Takamura and disappears from his gym for approximately nine days, reappearing during Takamura's match against Morris West with two women. Unfazed when West loses by ring-out KO, he meets Takamura in his changing room, provoking him and nearly starting a brawl. To everyone's surprise, Hawk was able to block one of Takamura's bare knuckle punches without staggering, saying it was alright because Takamura's bare knuckle punch was merely a 'handshake'.

In a public sparring match against an anonymous boxer, Hawk mockingly complains that the boxer was too strong for him, and asks for weaker sparring partners. Noticing Hawk's nonchalant attitude in the ring, Kamogawa Genji and Yagi Haruhiko leave the gym as soon as Hawk's girls walk in. Not moments later, Kamogawa and Yagi rush back in to find that Hawk had left his opponent in a bloody mess in seconds and was merely waiting for his girls to arrive, Hawk then leaves the gym. At the press conference, when asked to take a fighting pose for a picture, he punches Takamura in the chin. Makunouchi Ippo, Kimura Tatsuya, and Aoki Masaru were barely able to stop Takamura, but Kamogawa was the one who angrily grabbed Hawk's collar telling him that his actions were "unforgivable" to which Hawk responds with a quick backhand, causing Takamura to fly into a rage. Hawk then departs with a speech about why he likes to upset Takamura and how he wants all the women in Japan so Japan can breed better boxers using his genes, leaving countless Japanese reporters, boxers and onlookers enraged and unsettled.

As the match begins, Hawk gains the upper hand in the preliminary rounds, he is constantly surprised by Takamura's speed and precision. Due to his lack of knowledge on boxing basics, Hawk begins to lose against Takamura's boxing spirit and guts in the later rounds despite his 'ecstasy'. The fight ends with Hawk spewing blood and collapsing into the canvas, officially crowning Takamura the new WBC Junior Middleweight Champion. After losing the match, Hawk retires from his boxing career.

After losing the match against Takamura, Hawk became a broken man. He started drinking booze, and staying in a run down apartment with empty bottles on the floor. One day, David Eagle visited him to see why he lost. He asked Hawk what happened to him but Hawk told him to leave, or he would die. Eagle wondered if Hawk was in bad shape or if Takamura was that strong. After hearing Takamura's name, Hawk went crazy after remembering the fight. He dropped his glass, and told Eagle not to say his name in front of him. When Eagle tried to get an answer, Hawk couldn't handle it and ignored him.

Hawk possesses a dark-skinned complexion. He has short blonde hair styled in spikes with thick eyebrows and relatively large horizontally slanted eyes. His pupils are small and dark green in color, but change drastically when Hawk is experiencing Ecstasy, in which his pupils enlarge and turn bright green, along with the whites of his eyes going blood red.

According to Fujii Minoru and many other reporters, Hawk is comparatively larger in body size than many Junior Middleweight boxers in Japan but is surprisingly not in need of weight management. Trained in the same manner as Takamura and Miyata Ichirō, he is perfectly capable of fighting in the divisions between Junior Welterweight and Lightweight classes.

Growing up in the slums of New York has given Hawk a 'survival of the fittest' view on the world around him. He is a natural street brawler and has a bloodthirsty antagonistic attitude, to the point where he can easily classified as a sadist. When in a fight, he displays an ecstatic love of violence and killing characterized by a sudden 'burning' in his body that can only be pacified with continued violence to the point where he either knocks out, cripples or even kills his opponent or sexual intercourse with women. Impulsive and judgemental, he enjoys provoking others and greatly underestimates any boxer other than himself. He claims to be able to kill anyone easily by simply punching them to death but holds back because he enjoys seeing his opponents live with the pain of defeat and only uses his "License to Kill" as a last resort, the only time he's ever had to use it is in his fight with Takamura.

His long string of victories against boxers has given him a most arrogant and ignorant personality. During his WBC Junior Middleweight Championship press conference in Tokyo, Japan, he openly declared his willingness to give genes to Japanese women (whom he refers to as 'delicacies') in order for Japan to breed boxers strong enough to give him a challenge. He is notorious for his flippant attitude towards boxing and is known to barely train before matches as he spends most of the time playing mind games and tormenting his opponents before their match to the point where he breaks them mentally, spiritually and eventually physically. He shows a strong desire for glory and power as he almost always is shown boasting about how about how great and strong he is compared to the rest of the worlds fighters and expresses these opinions either through verbal, physical or theatrical means.

Shown to care only about women and the time he spends with them, Hawk has a group of female fans known as the Hawk Girls that cling to him during his visit to Japan. He intentionally draws a sparring match against a Japanese boxer longer so as to wait for his Hawk Girls to arrive, later leaving the boxer in a bloody mess after mere seconds upon realizing that his fans have arrived.

Despite all of Hawk's strength, his overall biggest flaw is his that he is a secretly a coward deep down, so deep down that not even Hawk himself knows it. Hawk is afraid of losing and not just in terms of fighting but everything he owns he is afraid of losing, since he was born dirt poor and was raised in the harsh "do or die" streets. He never had anything to begin with, so everything he has gained in his boxing career means more to him than his own life. However, Hawk's victories have never been earned since he was born a fighting prodigy and has never had to try hard to achieve victory, he has never needed to be brave and has never experienced fear or pain before so when he feels actually threatened by Takamura he has no idea how to respond, as he lacks what his coach would call "Boxer Backbone".

Hawk has displayed enough boxing prowess to be able to rival and exhaust Takamura in a match (though it is also fact that the latter was weakened by weight management). His style has been referred to as "truly wild" by Date Eiji, a statement reinforced by his own trainer, Miguel , who stated that Hawk's fighting is not boxing, but "pure violence". Hawk combines a wild and unorthodox style in boxing matches, throwing punches whilst utilizing flexibility to bend over backwards and hang on the ropes. The angle in which he throws his punches are so random, no one has managed to analyze his fighting style and predict where his next attack will come from. This flexibility, combined with Hawk's raw power, sharp reflexes, and reach gained from his no-guard stance makes him a fearsome boxer.

When Hawk is in his Ecstasy state, his body becomes hot, and he becomes more bloodlusted, to the point he wants to kill. Miguel noting that it's not the eyes of a man and the craziest eyes he has seen in boxing [3]. While Hawk never showed the full use of Ecstasy, Miguel noted that he was waiting for Hawk's "instincts" to take over, and when Hawk's eyes turned into the Ecstasy state, Miguel stated it what he was waiting for.[4]

Although Hawk is hard to nail when he is swaying backward, he can be pushed over very easily while in that position. Furthermore, if he becomes tired, he can no longer sway backwards, which means he can no longer perform his infinity punch. Hawk's lack of a guard works against him in such a scenario.

Takamura demonstrated that Hawk has many openings in his guard whenever he does put one up, which could be a potential result of Hawk not practicing guarding very often. His tendency to swing widely also earned him the final counter that knocked him out.

His second noted that although he was unpredictable and hard to read due to his unorthodox style of fighting, his punches were not direct and did not hit the vital points making it harder for him to knock out an opponent than Takamura.

Hawk Defending Himself in the Past 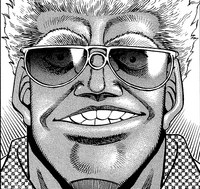 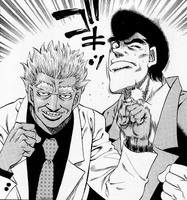 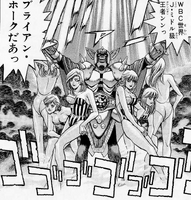 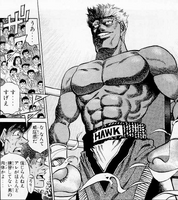 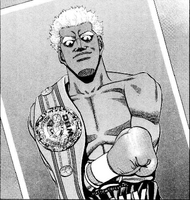 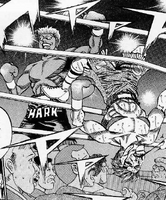 Past Opponent of Bryan Hawk

In crowd of Takamura vs West 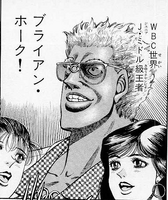 Hawk in the crowd

Takamura starring down Hawk at the end of West Match 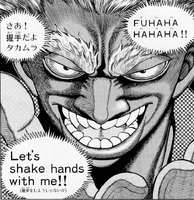 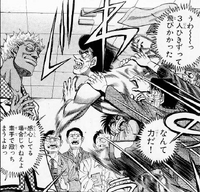 Takamura getting held back

Hawk greeting Takamura
Add a photo to this gallery 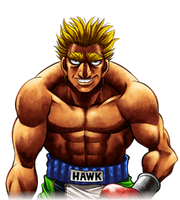 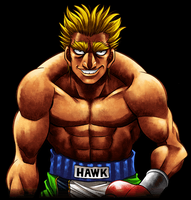 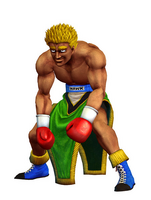 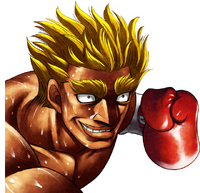 Retrieved from "https://ippo.fandom.com/wiki/Bryan_Hawk?oldid=72145"
Community content is available under CC-BY-SA unless otherwise noted.