Che Joun-bong (チェ・ジョンボン) is a non-recurring character in Hajime no Ippo.

He is a professional boxer from the South Korea that fought Miyata Ichirō in his 5th defence OPBF title match.

Prior to his match with Miyata, Che Jounbong mentioned he had never taken a down, even though he has 2 losses on his fight record (15 Matches - 13 wins, 10 KO's, and 2 losses.) He was currently ranked 6th in the OPBF when he challenged Miyata for his World Ranking.

Che was fighting Miyata Ichirō for his 5th OPBF title match. During the first 3 rounds, the match was one sided in Miyata's favor after Che was knocked down quite a few times in, but he continued to stand and fight. During the 3rd round, Miyata started to become distracted after looking at crowd, which allowed Che to land some punches on Miyata and turned the match around. As Miyata tried to get away from Che, Che stepped on Miyata's foot, preventing him from getting away. Che continued to land punches on Miyata. While Miyata was getting hit, he still seemed distracted.

Che Jounbong headbutted Miyata while he was distracted, and elbowed him too. Miyata couldn't use his legs to get away. Miyata was trapped in the corner unable to move, as Che was going in for the kill, Miyata tried to land a counter on him but he doesn't because he is distracted. Instead of taking a down from it, Miyata continued to stands. Right as Che went in for the kill again, the Ref stopped the match in order for a doctor to checked out Miyata's cut (from the headbutt) that was bleeding. Che's coach thought the ref was cheating in order to let Miyata rest. The doctor wanted to stop the fight to be on the safe side, but Miyata doesn't want him to. Miyata turned around and got ready to continue to fight against Che over the doctor and ref's objection, while the crowd cheered him on. The ref continued the match. Miyata was shaky on his legs and still distracted. Che continued to land punches on him. Che went in for the kill, while Miyata was getting angry and starts to trade hits with Che instead. Miyata continued to slug it out with Che. Miyata ended up landing a cross counter on Che, but Che continued to stand like it was nothing. Che continued to slug it out with Miyata, but Miyata landing more and more punches on him. Che ended up taking a down from it. The ref needed to step in between Che and Miyata to stop the fight since Miyata was continuing to throw punches while Che was down. The ref declared Miyata the winner in the 4th Round.

Che has a strong body for an infighter, and his appearance is similar to other South Korea boxers, where he has a bowl shaped hair cut.

Miyata knocking Che down in the 1st Round 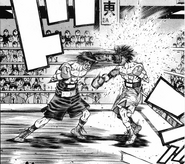 Retrieved from "https://ippo.fandom.com/wiki/Che_Jounbong?oldid=70949"
Community content is available under CC-BY-SA unless otherwise noted.