Hachi (ハチ, Hachi) is a semi-recurring character in Hajime no Ippo.

Hachi is the pet dog of Nekota Ginpachi and lives with him and his children at the Pension Yoshio. Hachi is usually seen with Nekota, where he travels with him where ever he goes. He is a father of six dogs, where Nekota ends up gifting one of them to Makunouchi Ippo for his twentieth birthday.

While the Kamogawa Boxing Gym members were visiting the Pension Yoshio for a training camp, Hachi jumped on Makunouchi Ippo, who Aoki Masaru and Kimura Tatsuya thought was a bear and ran. Hachi had Ippo, who did not know the way back, follow him back to Nekota. When Kamogawa Genji announced to everyone at the training camp that he would be splitting the group for individual training, Hachi followed Nekota, who visited each group during their training. Hachi saved Nekota when he slipped in a river and then while Takamura Mamoru was carrying Yagi Haruhiko, Hachi hopped on Nekota's back when Nekota was on Yagi's back.

On the final day of training camp, Takamura went out for a run with Hachi. On the way back, a bear appeared. Hachi growled at it, but began backing away from it. Takamura ended up fighting it, and knocked it out. When Takamura told everyone that he defeated a bear, no one believed him, but Takamura mentioned Hachi was his witness. When the Kamogawa gym members left, Hachi ran with Nekota to see them off.

When Nekota went to the Kōrakuen Hall for Takamura's title defence against Itō Takaaki, he brought Hachi with him. Nekota attempted to bring Hachi with him, however the employees would not allow it, leaving Nekota to be forced to leave him tied outside. After Takamura's victory, they ended up going to the Sugar Ray to celebrate the win. However, Nekota had forgotten Hachi, leaving him tied outside the hall for a long period of time.

The next day, Ippo ran into Hachi waiting outside of the Kamogawa gym while Nekota was passed out inside after drinking all night. When Mashiba Kumi stopped by to visit the gym, Hachi became excited to see Kumi, and gets petted. Ippo took Hachi along with him on his roadwork, while Kumi followed on her bike. After returning to the gym, Hachi was excited to see Iimura Mari. However, Mari commented that Hachi looked fat. Hachi then left with Nekota as he drove away in a delivery truck back to the pension.

When Nekota went to the Kōrakuen Hall to watch Ippo fight Sendō Takeshi, he hid Hachi in a large sack. During the first round of Ippo's match, Hachi got out of the sack shocking some of the crowd near them. Before round four began, Hachi barked from the crowd which made Ippo remember his training at the pension. Hachi then temporarily hid in the sack when employees came when they heard a dog bark. When Ippo defeated Sendō, Hachi went into the ring just in time to be captured in Ippo's victory picture. Hachi's actions during Ippo's title match earned his owner a lecture for three hours at the security office. Later, Hachi went with Nekota to the Sugar Ray to celebrate Ippo's win where Nekota gave one of Hachi's puppies to ippo.

When Nekota called Kamogawa, Hachi was laying next to his owner.

When Nekota learned that Takamura, Kimura, and Itagaki Manabu went to the beach for training camp, he took Hachi with him to the beach. When Hachi saw Takamura attacking Ippo, he jumped on him to save Ippo. Hachi then met his son, Wanpo, along with Aoki, Tomiko, and Kumi. That night, when Nekota pulled a prank on Takamura by pulling him into the water when Takamura was in the ocean, Nekota was beaten, causing Hachi to save his owner, passing out next to him after. The next night on the beach, Hachi went with everyone but Takamura to the beach to enjoy the fireworks while Takamura planned his revenge against them for having fun without him, by aiming fireworks at the group. When Takamura was spotted, he was talked into having fun with them after everyone cheered for him to join them. After a while, the fireworks began to go off, making Hachi and everyone else run away from them.

Later, Hachi went with Nekota when he travelled to the Ryōgoku Kokugikan in Tokyo to watch Takamura's WBC junior middleweight title match against Bryan Hawk. After Takamura won, Hachi went back to the Pension Yoshio with Nekota and Kamogawa. Later during a snow storm, Hachi went outside and jumped on Ippo, who Aoki thought was a bear. Hachi then returned with Ippo and Aoki to the house.

Hachi was next to his children and Nekota as Kamogawa and Nekota revealed their past as prize-fighters to Ippo and Aoki.

Hachi was carried in Nekota's sack to the Yokohama Arena, where Takamura's WBC middleweight title match against David Eagle was being held. Hachi got out during the match and watched as Takamura won. Hachi went with Nekota to the ring as everyone cheered. Hachi followed everyone as they went to Takamura's house to make sure he went to sleep. Hachi and the others were thrown out as Takamura was unable to sleep with everyone watching.

To get away from Aoki's Broccoman fad, Takamura decided to travel around Japan. During the travel, he stopped at the Pension Yoshio and trashed the place. Hachi was calm, which lead to Nekota to assume that the supposed thief was someone he knows. Nekota went to look for the "thief", which Hachi helped him look for. While looking for him, Hachi and Nekota went to a nearby hot spring and saw a group of monkeys passed out after being defeated by Takamura.

When Takamura visited Nekota at the pension, Hachi and his family laughed when Takamura became fruterated in a game of "A Boxer's Life." Takamura and Nekota decided to go to Tokyo to watch the match between Sawamura Ryūhei and Mashiba Ryō. However, they leave during the middle of a blizzard. Hachi and his sons ended up saving them when they fell and got covered in snow.

Nekota with his dogs goes to the beach again to sell stuff. Kamogawa talks Nekota about Ippo potentially being Punch Drunk.

He is later seen again, when Kamogawa head to Nekota's place in order to train to handle the New Dempsey Roll.

Hachi is a large white dog with a red dog collar. 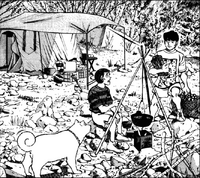 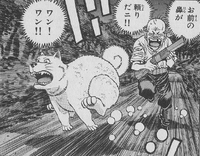 Hachi and Nekota chasing someone
Add a photo to this gallery 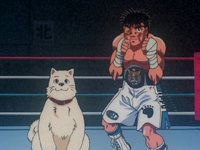 Add a photo to this gallery
Retrieved from "https://ippo.fandom.com/wiki/Hachi?oldid=74650"
Community content is available under CC-BY-SA unless otherwise noted.