Hajime no Ippo: The Fighting! (GBA)

Hajime no Ippo: The Fighting! (GBA)

Hajime no Ippo: The Fighting! is a video game released for the Game Boy Advance. It is an Action game, developed by Treasure and published by ESP Software, which was released in Japan in December 13, 2002.

Hajime no Ippo: The Fighting is a boxing game based on the manga/anime Hajime no Ippo. Ippo is a shy guy who helps his mother run their fishing business. Since he is helping his mother, he hardly has any time to make friends that's why bullies always picks on poor Ippo but one day, while the bullies was beating the hell out of Ippo, a stranger named Takamura saved him. Ippo was then taken to a boxing gym and discovers his boxing potential.

The game has 5 modes; Story, Tournament, VS, Sparring, and Customize mode.

Operation is only cross, A, B, R button. Roughly speaking, the cross button corresponds to the movement of the character, the A button to the avoidance, the B button to the attack, and the R button to the special command.

In addition to these basic operations, a large number of "combination blows" are prepared for each character. This is that by pressing the button with good tempo, it is possible to play out the continuous attack with the hook and the upper mixed. First, let us describe an example of combination blow below.

The Story Mode follows Makunouchi Ippo's journey from his spar with Miyata Ichirō to his second match against Sendō Takeshi for the JBC featherweight belt. It skips some of his fights from the series such as Oda Yūsuke, Fujiwara Yoshio, Jason Ozuma, Kobashi Kenta, and Ponchai Chuwatana. It also has Ippo fighting Shigeta Akira after losing to Date Eiji instead of fighting Ponchai. 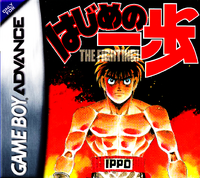 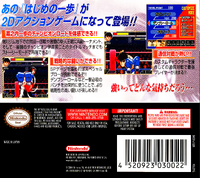 Other
Community content is available under CC-BY-SA unless otherwise noted.
Advertisement