In 1996, Kodansha and Weekly Shonen Magazine released a audio Drama CD loosely based on the manga, Hajime no Ippo.

Of the voice cast used, only Onosaka Masaya (Sendō) would reprise his role in the anime adaptation. However, others have appeared in different roles in the anime, such as Miki Shinichirou (as Sawamura Ryūhei), Yanada Kiyoyuki (as Saeki Takuma), and Omoro Masayuki (as Bill Stewart). 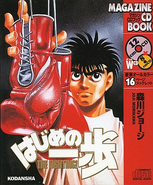 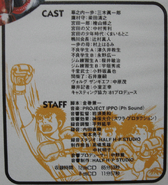 Volume Insert Ad
Add a photo to this gallery
Retrieved from "https://ippo.fandom.com/wiki/Hajime_no_Ippo_(Drama_CD)?oldid=69283"
Community content is available under CC-BY-SA unless otherwise noted.