Dankichi is a boxing trainer and former prize-fighter. He is a friend and former rival of Kamogawa Genji and Nekota Ginpachi. He is Alexander Volg Zangief's trainer and a former trainer for Sanada Kazuki. Dankichi harbours deep feelings of rivalry towards Kamogawa, and strives to one day train a boxer that can defeat Makunouchi Ippo or Takamura Mamoru.

In his younger days, Dankichi boxed along with Kamogawa and Nekota, but never managed to reach their level, partially due to his unusually fragile jaw. Nevertheless, he is a brilliant tactician who, since having left Japan for Mexico, is renowned for his successful training of several champions, including Sanada Kazuki.

The next day, Dankichi visited Kamogawa Genji and Ippo at the Kamogawa Boxing Gym. There, he revealed to them that his boxer, Sanada, would be fighting Kamogawa's boxer, Ippo, seeing their match as a way to fight Kamogawa once again while noting that it was not for revenge for breaking his jaw. After expressing his enjoyment of meeting Kamogawa in the ring again and that Sanada had already mastered the Hien, he left while warning them about a second swallow, the Tsubame Gaeshi. Later during Sanada's sparring session, Dankichi noted that Sanada learned about 80% of the Tsubame Gaeshi. Dankichi believed that the technique would slip through any guard, even the Peek-a-Boo Style.

Three weeks until the match, Dankichi held a public sparring session. Dankichi informed Fujii Minoru that they plan to show him everything, and not to let his eyes stray for an instant, as if the sparring partner can last through the end, he will be able to see everything. During the spar, when Sanada dodged the sparring partners punches, Fujii became confused when Dankichi claimed that he could gauge when his opponent is about to strike and when it i safe to go forward. Dankichi claimed he was surprised at first too, explaining that from the responses he receives from his own punches, he can determine the condition of his opponent's body. The spar then ended before Sanada could show the Tsubame Gaeshi.

Later, Nekota Ginpachi called Dankichi and Kamogawa together for a reunion at Sugar Ray's to talk about the past. Dankichi and Kamogawa did not know they would meet each other there and began to leave. Nekota then managed to get them to stay by making them feel bad as the three of them haven't talked together in decades. When Kamogawa asked Dankichi why he came back to Japan, Dankichi revealed his beliefs about Japanese boxers not being the best in the world and when a Japanese went against a Mexican, his theory was proven. Dankichi then mentioned a certain Mexican boxer with close to perfect offence and defence and over sixty wins, wanting a Japanese man to defeat him, the WBA featherweight super champion, Ricardo Martinez. Dankichi believed that as Ippo continued to go higher in boxing, he would eventually run into him. With Kamogawa thinking it is too early for Ippo to take on the world, Dankichi told him that his boxer would get there sooner then while expressing how lucky he was to find Sanada who had such potential.

After the weigh-in, Dankichi mentioned that despite Sanada's thinking that he did not make it harder for Ippo with a lighthearted handshake, he unintentionally put pressure toward the champion by making him doubt his own strength. On the day of the match, Dankichi was one of Sanada's cornermen for his match. When Sanada lost and announced his retirement, wanting to focus on his medical career, Dankichi had faith that Sanada would make for a wonderful doctor. Before leaving Japan by plane, he was approached by Kamogawa and Nekota. After Dankichi and Kamogawa gave their thoughts about their match, Dankichi leaves while claiming that he had not given up and will meet Kamogawa in the ring again.

Dankichi took Alexander Volg Zangief under his wing in the United States of America as Volg went out of retirement after Volg's mother passed away.

Prior to Ippo's match against Wally, Miguel Zale and Wally head to the New York City, USA for sparring practice. Wally spar's Volg while there.

As a young adult, Dankichi had black hair in a shaved hair style along with black bushy eyebrows and a black eye colour. He also had a muscular build. Older, Dankichi grows out his hair, which is short, and turned white along with his bushy eyebrows. Dankichi also grows a full white beard and moustache. With age, his face has gained wrinkles and he begins walking with a brown cane.

In his younger days, Dankichi wore a beige buttoned shirt while being Kamogawa's cornerman against Anderson. In his older appearance, Dankichi wears a green beanie with a dark green shirt under a green winter coat and an orange scarf. As a corner man with Sanada, Dankichi wears a long sleeved shirt with "DYNAMITE GLOVE" on the front and back along with his green beanie.

Frightening to Mashiba Kumi and having the same intensity as Kamogawa,[3] Dankichi can be seen as stern and intolerable to some. However, Dankichi has a passion for boxing and cares about his students, wishing Sanada the best when he decided to retire and focus on his medical career. Dankichi cares about Japan and boxing and keeps his pride as a Japanese from his younger days, wishing to have a Japanese boxer to take down the WBC featherweight super champion Ricardo Martinez.[4] He dislikes it when younger individuals look down on the elderly, thinking as if they treat them as invalids.[5] He takes boxing seriously, believing that the two boxers fighting each other should be enemies even outside the ring, not even a handshake between the two.

Dankichi is a former boxer from the days when boxing was called "prize fighting". He was revered as a true prodigy.[7] Kamogawa referred to him as a swallow, flying around the ring corner to corner like one. His abilities made boxers such as Kamogawa and Nekota fight for their life even when Dankichi lost.[8] Dankichi was also known to not be a one-dimensional boxer.[9] Dankichi's Sunday punch was the Hien.

Dankichi gained a glass jaw when Kamogawa landed a punch into his jaw, shattering it into five pieces, making him extremely weak in his jaw.[10] This did not stop Dankichi from boxing, however, he retired after losing to Ralph Anderson.

Kamogawa's plans that would put him in a strategic advantage against Dankichi, failed against him, making Dankichi an intelligent fighter.[11]

As a travelling trainer going around the world to find boxers to train, Dankichi is known around the world, highly ranked in Mexico, as a trainer that can train boxers that can rival world rankers.[12] While in Mexico, Dankichi developed the Tsubame Gaeshi, which he then trained Sanada to use. When Dankichi trained Sanada, his teachings made Sanada surpass the data that Kamogawa had on him before Dankichi taught him.[13]

Dankichi and his younger self. 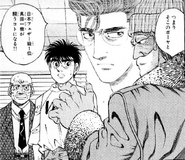 Dankichi and his new boxer, Sanada.

Dankichi heading to the US.
Add a photo to this gallery

Dankichi in his younger days.

Dankichi is hurt by knockout from Ralph Anderson and is saved by Kamogawa and Nekota.
Add a photo to this gallery

Retrieved from "https://ippo.fandom.com/wiki/Hama_Dankichi?oldid=73895"
Community content is available under CC-BY-SA unless otherwise noted.