Headslip is a technique used to avoid punches aimed for the head by swaying it to either the left or right of the oncoming blow. It has been used by several boxers in the series and was showcased as a way to neutralize "head-hunters". Sendo used this technique in his spar with Miyata with an open guard stance, relying on his instincts to dodge the punches. 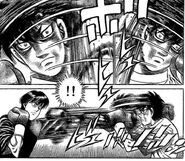 Sendo's headslip
Add a photo to this gallery
Retrieved from "https://ippo.fandom.com/wiki/Head_slip?oldid=25755"
Community content is available under CC-BY-SA unless otherwise noted.