Nanako Itagaki (板垣菜々子, Itagaki Nanako) is a recurring character in Hajime no Ippo.

She is the the younger sister of Itagaki Manabu, who attends his boxing to cheering him on. Nanako is also romantically interested in Makunouchi Ippo, and hugs him when ever she see him. She tries to come between Mashiba Kumi and Ippo when ever she sees them together.

While her brother was boxing in high school, she watched and cheered for him as he fought against Imai Kyōsuke in the inter-high national tournament.[2]

Nanako met Makunouchi Ippo, who she is a fan of, at her house after her brother invited him to their home to meet his family and celebrate his victory as a pro boxer. Her and the rest of her family cracked jokes much to Ippo's discomfort. She then laughed with her family at Ippo's unintentional pun, much to the latter's chagrin.

Nanako and Manabu went to a local pool to keep an eye on Ippo after hearing he was soaking and resting when he reached peak physical exhaustion from training for his upcoming match with Shimabukuro Iwao. When they arrived, she saw Mashiba Kumi with him. She greeted Ippo in the pool, and boasted about her young age to Kumi. Nanako wanted to know who Kumi was and what her relationship with Ippo was, since she heard that Ippo didn't have a girlfriend. Later, she talked with Kumi about their brothers being boxers and how she was jealous of Kumi's close relationship with Ippo, but believed she has a chance for her with Ippo if she works hard.

After Ippo's victory against Shimabukuro, Nanako visited Ippo. When she learned that he had been sleeping the last two days, she worryingly went to Ippo's room after permission from Makunouchi Hiroko. Nanako tried to kiss Ippo after she saw him asleep, but was stopped upon Kumi's arrival. She argued with Kumi until Īmura Mari arrived and criticised them for being too loud. After Nanako saw Mari searching Ippo's bedroom and looking through his photo album, she joined her. After Mari's comments about being interested in Ippo, the three began to argue. Hiroko then entered the room with some tea for them, and commented that when Ippo was like this, she tries to let him sleep as peacefully as she can. After they heard that, Nanako, Kumi and Mari felt ashamed and decided to leave in order for Ippo to sleep.

While Manabu was trying to figure out the Dempsey Roll's methodology, Nanako was curious as to what was going on with Ippo, annoying Manabu.

After Umezawa Masahiko quit Makunouchi Fishing Boat, Manabu started working there to help Ippo and for training and earning money. Nanako also helped out for free in order to get close to Ippo.

During Manabu's East Japan Rookie King Tournament semi-finals, Kumi helped Ippo and Manabu train by timing their sprints. As Kumi and Ippo were about to make plans for Saturday since they were free, Nanako interrupted the two, claiming that she was free too. As they change the subject to talk about Manabu's East Japan Rookie King Tournament instead, Nanako was positive that her brother would win the tournament unlike someone else's brother. Manabu was invited to go out with them Saturday, however, he wasn't in the mood. Later, while Nanako was at Ippo's house to help with the boat, she teased Kumi on the phone by revealing that her and Ippo were "going out" Saturday until Ippo grabbed the phone to explain that they were going to the Kōrakuen Hall to watch the qualifying match to see who Manabu fights in the semi-finals.

Nanako went with Manabu and Ippo to the Kōrakuen Hall to see who her brother will fight. She watched as Makino Fumito wins his match, making him her brother's next opponent. As they left the venue, they were approached by Makino, who made remarks and thought Nanako was Manabu's girlfriend. She defended her brother before Imai Kyōsuke arrived. After tensions rose and Ippo stopped the three from getting anymore heated, Makino left not before stepping on Ippo's foot, which made Nanako frustrated. When Manabu got home after sparring with Mashiba Ryō and his face was swollen, Nanako called Ippo to inform him and was delighted that he showed up to their home. Two days before Manabu's match against Makino, she went to get her brother so that he could eat dinner. However, Manabu couldn't eat due to the weigh-in being the next day. She noticed her brother looking depressed in his room.

After Itagaki's match with Imai Kyōsuke, he was sent to the hospital. Nanako decided to visit him. When she arrived she saw Imai get into an arguement with Itagaki over something. Kumi returned to yell at Itagaki for not resting, that causes Itagaki and Imai to calm down, which annoyed Nanako.

A few days later, Nanako is with Itagaki when he was ready to leave the hospital. Ippo arrived to pick Itagaki up in a truck, while Imai offered to walk Nanako home, which Kumi comment that Nanako should do it since they would make a good couple. That mde a Nanako a little angry, and she told Imai she thought he wasn't suppose to talk to her since he lost the match. Imai walked away determined to beat Itagaki in a rematch. Kumi thought men hate to admit they lost, and Nanako told her that if she had something to lose why wouldn't you try to keep it as she left.

with Ippo, Nanako and Itagaki becomes jealous, with the latter thinking Ippo has a cute girlfriend. Nanako disagrees with him since she doesn't think Kumi is his girlfriend.

Nanako appears in this arc.

When she first appeared in the story, she is pretty young, and Ippo comments on her beauty.

A 16 year-old high school student at introduction, Nanako is one of Makunouchi Ippo's biggest fans. Because of this, she views Mashiba Kumi as a rival and competes with her at almost everything. She takes any chance to be around Ippo, and even tried to steal a kiss from him once when he was sleeping after a rough match, but she was interrupted by Kumi. It's shown that she has a perverted side, as when she jumped into pool where Ippo was, she rudely grabbed his penis while stating an innuendo.

Like her older brother Manabu she is very attractive, but she also has the same love for puns as the rest of her family. Imai Kyōsuke is in love with her, but she tends to ignore his feelings as she has no interest in dating her brother's rival.

Kumi meeting Nanako and Mari after Ippo's match with Shimabukuro
Nanako and Ippo - Pool.png
Nanako, Itagaki, and Ippo at the Pool 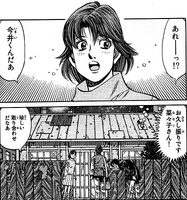 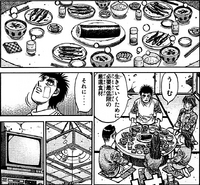 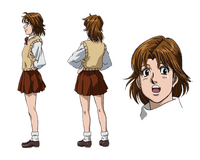 Nanako - Anime Profile
Add a photo to this gallery

Retrieved from "https://ippo.fandom.com/wiki/Itagaki_Nanako?oldid=74600"
Community content is available under CC-BY-SA unless otherwise noted.