He is a featherweight professional boxer that participated in the East Japan Rookie King Tournament, where he fought Hayami Ryūichi in the first round.

Partaking in the East Japan Rookie King Tournament, Iwakawa was matched up against the highly popular Hayami Ryūichi in the first round. As soon as the match began, Iwakawa attacked Hayami, who easily dodged all punches. When Iwakawa got caught against the ropes, Hayami unleashed his Shotgun on him, delivering twenty-seven hits before being stopped by the referee.

Iwakawa has a well-built tanned body. His hair is short and dark grey in colour. Iwakawa has dark grey large eyebrows and a large nose.

Iwakawa has shown to be irritated when he saw Hayami being confident and hearing the crowd cheer for Hayami.

Iwakawa has an aggressive fighting style. His hand speed is fast, being able to send four punches in a second. [1] 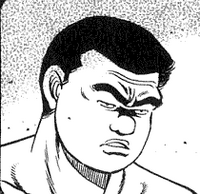 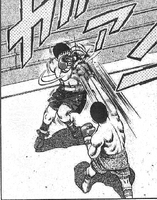 Iwakawa attacks right from the start 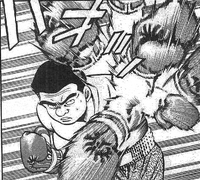 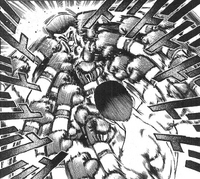 Retrieved from "https://ippo.fandom.com/wiki/Iwakawa_Seike?oldid=69900"
Community content is available under CC-BY-SA unless otherwise noted.