Jōji Morikawa (森川 常次), often romanised as George Morikawa (森川ジョージ), is a Japanese manga artist affiliated with Kodansha. He was born January 17th, 1966 in Tokyo and is a graduate of Matsubushi High School (松伏高等学校, Matsubushi Koutou Gakkou) in Saitama Prefecture.

He is the author of Weekly Shōnen Magazine's flagship series Hajime no Ippo, which won him the 15th Kodansha Manga Award in 1991. He later won the 43rd award in 2019.

He is also the owner of the boxing gym JB Sports Gym and occasionally acts as a second for some of his gym's boxers.

He was born January 17th, 1966 in Tokyo. When Morikawa was 4 years old, he would watch the anime, Harris no Kaze (ハリスの旋風) by Chiba Tetsuya, who he became a big fan of, and aspired to become a mangaka (Manga Artist). He would always get into fights during middle school and high school. On the other hand, he also served on the student council. When he was 17, Morikawa released his debut manga, Silhouette Night, while still in high school. Later, he became a graduate of Matsubushi High School (松伏高等学校, Matsubushi Koutou Gakkou) in Saitama Prefecture.

He wanted to join Weekly Shonen Magazine because that was the magazine that Chiba Tetsuya was published in. His first published manga series in 1986 was a soccer series, Kazuya NOW, and then a Formula 1 series, Signal Blue, in 1987. Unfortunately, all of his serialised works were cancelled before completion, but the editing staff would always give him another chance. However, he had a wife and child and times were so hard for him. After the third serialisation was cancelled, Morikawa told the editor in charge that the next one will most likely be the last.

Not knowing what kind of series to make, he has trouble with the storyboard. The person in charge at the time was very persistent and encouraged Morikawa until late at night, even to the morning to redo things with the storyboard. Being well-known for having an unparalleled likeness for boxing, he was asked if he wanted to draw a boxing manga, but refused, believing he shouldn't do one just on boxing. They then explained "This is the last one, challenge with your favourite genre, in case you come back.". Morikawa had trouble responding, wanting to come back while having the words, "Last..." and "Challenge..." circling around his head.

Then all of a sudden, his hands moved and made a sketch of a boxer. He then became determined and accepted the challenge to make a boxing manga. Remembering Ashita no Joe, he stated "I'd like to approach boxing differently", "A High School Boxing Club, I'd like to make amateur boxing the theme".

And so, he began making the Hajime no Ippo manga series of his favourite sport, boxing. Started in 1989, Hajime no Ippo became a huge hit and has indeed become the flagship series of Weekly Shōnen Magazine.

On January 17, 2020,[3] Morikawa announced that he would be at an art exhibit in Miyagi, taking place at the Ishinomori Manga Museum in the exhibition room on the second floor from February 22, 2020 to April 12, 2020.

On June 15, 2020[4], Morikawa took part in a series with more than 100 mangaka inspired by the new coronavirus. This series called "MANGA Day to Day" was a daily collection of short manga that can be read in about one minute by more than 100 popular manga artists, including Norifumi Hirokane, author of the "Shima Kosaku" series. After Chiba Tetsuya's work "Evil Soul" was released in advance, it started full-scale from the 15th, and a new work was posted on Twitter once a day.

On February 25, 2922, Morikawa tweeted that he is against the war of the 2022 Russian invasion of Ukraine, posting an image of Alexander Volg Zangief and Dankichi Hama.[1] 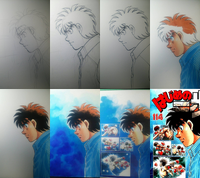 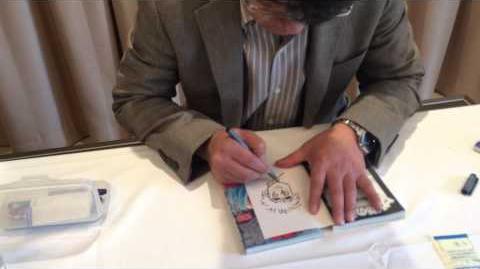 For examples of all his various Artwork check out: Morikawa's Artwork

Mangaka that Morikawa worked for as an Assistant

Character Ralph Anderson in Baribari Densetsu like in this Morikawa's series.

Baribari Densetsu Cover with Ralph Anderson on it

Note: In an interview, Morikawa mentions he occasionally helped other mangaka when he was starting out from time to time like with Mafune Kazuo and Tatsuya Hiruta.

Past Assistants of Morikawa

Moirkawa Standing in front of Desk

Morikawa in his Office 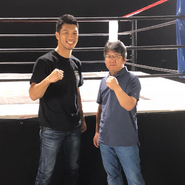 Morikawa with Kyosuke Sawada after win

Tributes to other Mangaka