Ozuma is a retired boxer who was affiliated with the Hachinohe Boxing Club. He was known for his immensely powerful right hooks, intimidating appearance, but surprisingly kind and compassionate personality.

Ozuma was an African-American soldier stationed at the Misawa Air Base near Hachinohe, Aomori. Before becoming a boxer, he was homeless and didn't know where to go when he arrived at Japan. Believing if he did something, he could produce something, he went to the Hachinohe Boxing Club in order to box. There he met some very kind people, such as his coach and the coach's wife, as also the other few club mates which helped him a lot with boxing. Eventually as their relationship grew, he became part of the small club's family.

Having won three matches easily by knockout, he decided to enter the East Japan Rookie King Tournament in order to progress further, his goal to become champion.

After sparring at the Hachinohe Boxing Club, he saw his coach's wife hurting her finger while sewing a sandbag. He offered to take over and sew, however, she initially refused before accepting the offer. He then told her that he would continue winning and become a champion to receive money for the gym to prevent her from injuries.

He headed off to the Nerima Boxing Group as everyone bid him farewell, his coach stayed behind to watch over the club as the coach's wife lended him some money to have for the trip. When he arrived to the Nerima Boxing Group, he sparred with Ōta Hiroyuki. When Ōta made Ozuma angry, Ozuma quickly defeated Ōta with a hook that sent him to the hospital. At the day of his first match of the tournament against Makunouchi Ippo, he went to the weigh-in room and passed the weight check. He then went and met Ippo, wishing to have a good fight as he stated that he will do his best.

When the match arrived, Ozuma went to the ring and the match began. Both fighters did not land a hit for awhile, until Ozuma landed a left that caused Ippo to go down. In the second round, Ozuma managed to knock Ippo down again, before Ozuma got knocked down by a body blow. During the second round, Ozuma threw a right hook, Ippo then ducked and threw a body blow that stunned Ozuma. Ozuma was then hit by a series of punches that knocked him out. Ozuma was unable to get up and lost the match. Ozuma then wished for Ippo to get the Rookie King title.

Later, it was revealed that Ozuma had retired due to spine damage from the match[1].

Towering in height compared to Ippo, Ozuma's appearance can prove to be incredibly intimidating. He has a dark skin tone and black hair. His hairstyle, as expected of a man from the military, is cut short and styled neatly to prevent any stray strands to fall in his line of vision. In addition to that, Ozuma also has a neatly trimmed stubble beard that wraps around his chin and mouth. His eyebrows are short and moderately thick. Ozuma's eyes are onyx in colour.

Ozuma's attire consists of a variety of clothes such as black muscle shirts, buttoned shirts, and jean jackets. In the ring, he wears boxing shorts that are blue in colour with "OZUMA" on his name tag.

Ozuma possesses a polite and outgoing personality. He is kind, compassionate, and charitable, stating that his reason for boxing is to earn money for his gym. He treats his coach and gym mates like his own family, supporting them and fighting for them with hardened resolve.

Ozuma is an orthodox right-handed in-fighter and a boxer-fighter.[4] His body, built expertly for an in-fighter, has the ability to withstand the punches of the esteemed hard-puncher Ippo.

Ozuma most frequently fights at close range to increase the precision of his immensely powerful hooks, which are considered his finishing move. Even a single hook of Ozuma's possesses the power to hospitalize an opponent.[5] His hooks in power are comparable to Takamura Mamoru's and in speed it may be higher.[6]

When he throws his signature hook, his body opens up, leaving him very vulnerable to body blows and counterattacks. 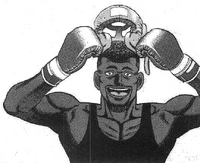 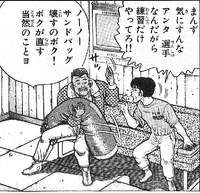 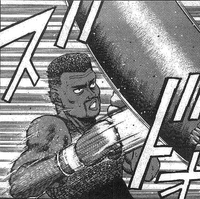 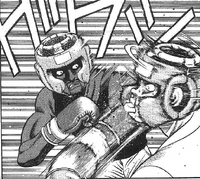 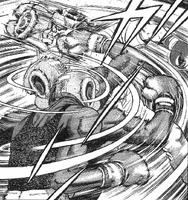 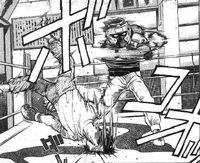 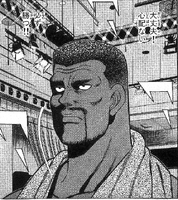 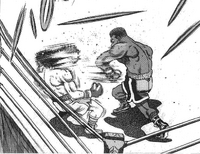 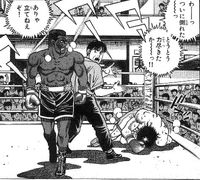 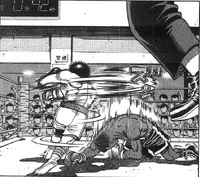 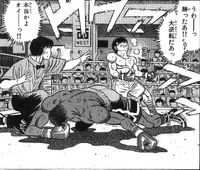 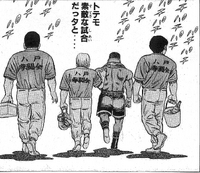 Ozuma leaving.
Add a photo to this gallery 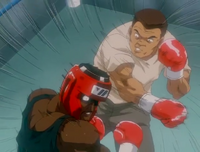 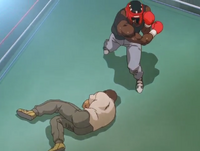 Ōta after the spar. 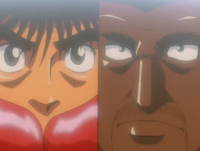 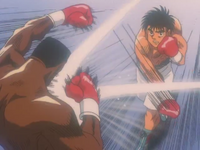 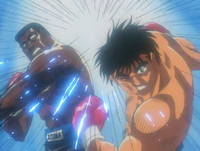 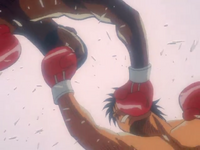 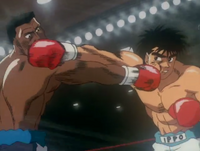 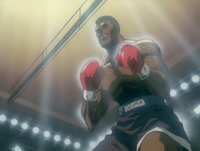 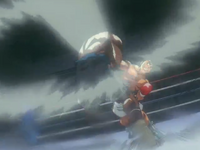 Retrieved from "https://ippo.fandom.com/wiki/Jason_Ozuma?oldid=74242"
Community content is available under CC-BY-SA unless otherwise noted.