Round 8 (Season 1)
Kōrakuen Hall (後楽園ホール Kōrakuen Hōru) is an arena in Bunkyō, Tokyo, Japan, which has hosted many professional boxing and wrestling matches. Part of Tokyo Dome City, it is one of Tokyo's biggest attractions. It has a capacity of approximately 1,800 people. The ring inside is 20 sq. ft..[1]

The venue hosts the weigh-ins and has a sauna called the "Sauna Tokyo Dome" (サウナ東京ドーム, Sauna Tōkyō Dōmu). The television boxing program "Dynamite Glove" broadcasts the events held at the venue. 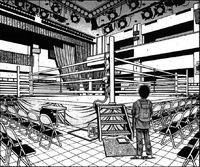 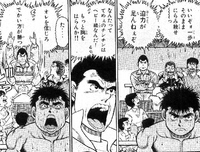 Takamura cheering for Ippo in his first match