Genji Kamogawa (鴨川源二, Kamogawa Genji) is a tritagonist character in Hajime no Ippo.

He is a long old retired prizefighter who founded the Kamogawa Boxing Gym years later after retiring. He acts as the main trainer of both students of his, Takamura Mamoru and Makunouchi Ippo, as well as a cornerman for the boxers under Shinoda.

His surname is Kamogawa. In Japan, surnames are listed before given names.

Kamogawa worked as a prizefighter in Japan shortly after the end of World War II. He has had multiple boxing matches with former prizefighter Nekota Ginpachi, two of which he lost, two of which he won, and another that ended a draw. He was also friends with fellow prizefighter and future trainer Hama Dankichi. During the American occupation of Japan, Kamogawa harboured strong feelings of national pride, refusing to accept food handouts.

Kamogawa witnessed American sergeant Ralph Anderson, with Miguel Zale as his cornerman, easily defeat Dankichi in an exhibition match. After Dankichi's loss, Anderson terrorised the population and chased Yuki into the alleys. Here, Kamogawa experienced the power of American boxing first-hand as he and Nekota were beaten up by Anderson while protecting Yuki. After seeing Anderson's clinical jabs and being hit by a Cross Counter, Kamogawa acknowledged that American boxing was at least a hundred years ahead of Japanese prizefighting.

During this time, Yuki and Nekota moved into Kamogawa's makeshift home. Yuki looked after the pair while they trained, inspired by their commitment to rebuilding the country through their fighting spirit. However, Kamogawa discovered that Yuki was a survivor from Hiroshima, who was dying from radiation poisoning.

Although Kamogawa's pride was hurt, he was aware of the gap between Japanese prizefighting and American boxing, and declined to challenge Anderson on the basis that true boxers fight against their own weight division, and as a bantamweight, Kamogawa was no match for Anderson. However, Nekota secretly arranged a fight with Anderson. Kamogawa furiously rushed to the match after realising Nekota had been brain-damaged after their last fight together. Despite Nekota's superior speed, he was crippled by an illegal Rabbit Punch and was severely beaten before Kamogawa interfered and stopped the match.

Swearing to avenge Nekota, Kamogawa trained by punching a log into an embankment, honing his fists into a deadly weapon. In the match against Anderson, Kamogawa was outclassed and unable to land a clean hit. Through the strength of his spirit and Nekota's desperate encouragement, Kamogawa absorbs Anderson's chopping right and lands two deadly body blows, breaking his ribs and puncturing his internal organs. Despite defeating Ralph, Kamogawa broke both his fists in the process, which ended his career thereafter. With Nekota retreating to his mountain home to recover, Kamogawa put aside the feelings between himself and Yuki and dedicated his life to passing on his passion for boxing.

Sometime later, Kamogawa opened his own boxing gym, where he trained the future manager of the gym Yagi Haruhiko, the then-OPBF Featherweight champion Miyata Senior, and the budding counter specialist Miyata Ichirō. By chance, he encountered Takamura Mamoru and convinced him to enter the world of boxing under his tutorship.

During his youth, Kamogawa sported messy, dark-brown, hair and a muscular physique. He also had a very rigid face structure, with a bulky isometric nose and large eye-brows. This refined jawline is less prevalent in his older years.

In his twilight years, Kamogawa is partially bald with grey hair residing on the sides of his head, as well as an unusual small clockwise spiral of hair above his forehead. He also has large grey eyebrows and a large nose. His age leaves him with liver spots and wrinkles. It also leaves him often walking with a brown wooden cane.

His attire at his gym and during matches usually consists of a white long or short-sleeved shirt with a small "KBG" in black letters on the front in the top-right corner, and "Kamogawa Boxing Gym" in big black letters on the back along with black pants and shoes. Sometimes outside the gym, he wears a brown suit with a red tie, brown fedora, pants and shoes. Sometimes during matches he wears a navy blue long-sleeved shirt with "Dynamic Glove" in big white letters on the front, black pants and red shoes.

Kamogawa is fairly stubborn, stoic, and introspective, rarely displaying his emotions outwardly. He is deeply passionate about boxing as a sport and takes great pride in his boxers success. Despite this, he is prudish and does not tolerate indecency and debauchery, disciplining his disciples with his cane when they step out of line. He only yells at people who he has hopes for and deems dependable[3]..

He is repeatedly proud of Takamura and Ippo, though he rarely expresses it. It is Ippo who he regards as his "last son". He seeks to raise a world champion whose boxing is principled on fighting spirit, not just talent or skill.

Back in his prime days as a Bantamweight, Kamogawa was a right-handed hard fighter. Nekota once stated that Kamogawa's right and left hasn't faded in his old age, implying that Kamogawa used both Southpaw and Orthodox Boxing Styles.

He invented Tekken, a destructive body blow which leaves an imprint of a fist behind. He possesses a stubborn and unyielding fighting spirit, which he seeks to pass down to a successor in the hopes of challenging the world. His strong willpower allows him to continue fighting even the toughest of opponents.

Kamogawa has vast intelligence in boxing, knowing many techniques, styles, and boxers from the real world. He is able to quickly recognise many techniques as a boxer is using them, such as when he saw Ippo's Dempsey Roll for the first time. His boxing knowledge allows him to quickly come up with strategies to counter an opponent before and during matches for his boxers. 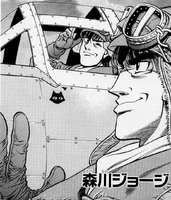 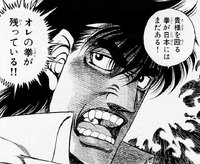 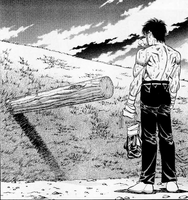 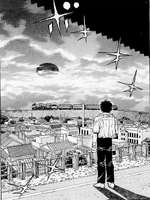 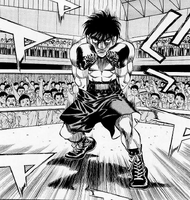 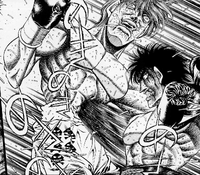 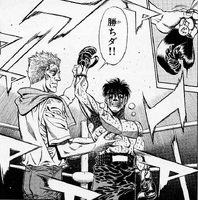 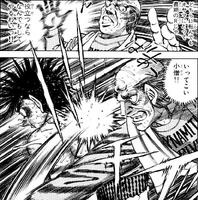 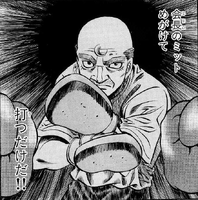 Kamogawa noticing the logs in the ground 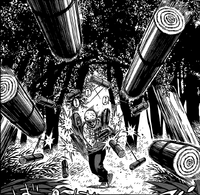 Kamogawa performs mitt training with swinging logs in the wilderness.
Add a photo to this gallery

Retrieved from "https://ippo.fandom.com/wiki/Kamogawa_Genji?oldid=72725"
Community content is available under CC-BY-SA unless otherwise noted.