Wiki Ippo
Register
Don't have an account?
Sign In
Advertisement
in: Characters, Male Characters, Characters from Tokyo,
and 10 more

At some point, Imae did a "Ten Match Challenge" to get popularity. In the challenge, he got beat up badly by the third challenger.[2]

For his second JBC lightweight title defence for the Champion Carnival, he was to fight the first ranked challenger Aoki Masaru. After finding out that the match was sold out, the Kikumoto coach told Imae that people believed that he was a lame boxer, but this time he can show his real power, and appeal to a lot of people. Imae then proceeded to do the final checks with his coach before the match by reviewing videos of Aoki's matches and explaining how he would beat Aoki's unorthodox techniques. Imae declared to his coach that he devotes himself to boxing and would not lose him. On the day of the weigh-in, Imae met Aoki at the Kōrakuen Hall and was angered that Aoki seemed to not be taking the match seriously. After both pass the weight check, they are asked to shake hands. Imae refused, claiming that he does not respect nor consider Aoki a boxer and would destroy his Frog Punch. Aoki then revealed to Imae that he has a present for him: a new technique that attacks his instincts and impossible to defend. Aoki then mentioned that he would prove Imae that he isn't just a clown and that he did his research. Imae replied that if Aoki is a researcher, then he is a hard worker. After the weigh-in, his girlfriend, Sachiko was waiting for him with food. Imae walked away after expressing how he did not want the food and was angry that she showed up despite having broke up with her to focus on boxing. Later, Imae was feeling the pressure of the match, where he had a hard time calming down.

The next day, he arrived to the Kōrakuen Hall for his second title defence against Aoki. While waiting for their match, Aoki and Imae encountered each other while going to the bathroom. Imae talked down to Aoki for fooling around with a woman while he broke up with his woman to concentrate on boxing and claimed that he will show Aoki the strength of a serious boxer. Aoki then told Imae that he threw away his goddess of victory and that he will show him the strength of a man with someone to look over them. When their match arrived, Imae and Aoki went into the ring to begin their match.

The match began, and after a minute of no punches being thrown in the first round, Aoki made the first move. However, Imae predicted Aoki's weird movements and was able to keep his pace. After Aoki dodged Imae's right straight, Imae was grazed by a Frog Punch that left a scar on his face, making Imae acknowledge the technique's power. Aoki then used unorthodox movements to dodge and attack Imae. When Aoki stopped, Imae attempted to hit Aoki, but Aoki dodged and launched a Frog Punch. Imae countered the Frog Punch, making Aoki go down. Aoki got up and immediately went down again after Imae hit him. When Aoki got back up and visibly hurt, Imae became confident and went all out on attacking Aoki, who only blocked until the end of the first round. As the second round began, Imae continued to attack Aoki's guard until the end of the fourth round, unknowingly following Aoki's plan of wasting his stamina, and angered to discover that he was fooled.

In the fifth round, Aoki switched to out-boxing, hitting and running from the now tired Imae. Imae was hit when he tried to rest, and was saved by the bell for the end of the fifth round. With Imae confused as what is real and what isn't, his coach advised that he is in Aoki's pace and to not rush in and attack, instead take points. When the six round began, Aoki, after knocking Imae's jab away, stepped back and stops. Aoki turned his head to look away from Imae, who also looked away to see what Aoki was looking at. With Imae looking away, Aoki used his Frog Punch, knocking him down. In shock as to what happened, Imae got up and clinches until Aoki got out with an uppercut. Aoki proceeded to look away again, which Imae also was forced to do so by instinct and got knocked down by a Frog Punch. Since one of Imae's hands blocked the punch, minimising the damage, he got up. Before either were able to do anything, the sixth round ends. At the corner, Imae acknowledges Aoki's strength and realised that the difference between them is that Aoki has a "Goddess of Victory".

In round seven, Imae began to lose his will to fight due to having thrown his own "goddess of victory" away. However, when Aoki used his Look Away, Imae could not look away, as he saw his girlfriend, Sachiko in the audience praying for him. Not knowing that Imae did not look away, Aoki missed his Frog Punch as he leapt into the air. Aoki was hit in the air and almost fell before catching himself. Aoki and Imae proceeded to have a punching match until the end of the final tenth round. The tenth round ended with both down on the canvas. With the match over, it came down to a decision. The score ended in a draw, resulting in Imae keeping his belt. With the match over, Imae made up with Sachiko and met Aoki outside the Kōrakuen Hall, thanking him.

Later, Imae lost his title in a match against Ōshima Sōshi, due to the damage he got from fighting Aoki.

After losing his JBC lightweight title to Sōshi, Imae managed stay in the upper rankings for a position in the Class A Tournament in hopes for another shot at the JBC title. For the first round of the tournament, Imae went to the Kōrakuen Hall to fight Iga Shinobu. The match ended with Imae getting effortlessly defeated by knockout in the first round.

Imae has long black hair, and brown eyes. He also has a mole above his left eyebrow. He tends to be on the serious side, and dresses the part.

Imae is a boxer with the same tastes in girls as Aoki. However, he dumped his girlfriend and said he never wanted to see her again, since he believed having any sort of relationship would be half-assing his boxing career. He later reconnected with her after facing Aoki and having a change of heart. When he was about to lose the match he remembered that impressing his girlfriend was the reason he even started boxing to begin with and this motivated him for the rest of the match.

Imae's boxing is the definition of "textbook": he fights very cautiously, rarely deviating from the normal jabs and one-twos and having no other specialised punches. He fights with efficiency rather than doing any unpredictable punches or shifts, cheesy tactics or trying to catch the opponent off guard, which practically makes him the polar opposite to Aoki. He is a boxer who mostly has won by decisions, and has a low percentage of KOs. 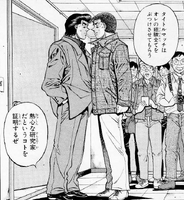 Imae and Aoki stare down 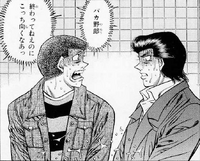 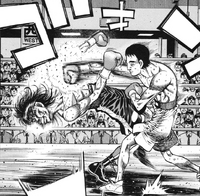 Imae and coach for the Iga match 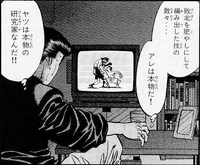 Aoki doing the look away 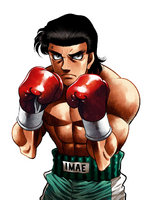 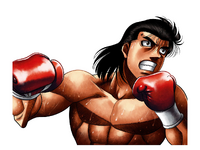 Imae together with his Goddess of Victory