Wiki Ippo
Register
Don't have an account?
Sign In
Advertisement
in: Characters, Male Characters, Characters from America,
and 4 more

Keith Lycaon (キース・リカオン, Kīsu Rikaon) is a professional boxer. He fought Mamoru Takamura for his WBC and WBA middleweight titles.

Lycaon travelled to Japan for his upcoming match against WBC and WBA middleweight champion Mamoru Takamura. When the press conference arrived, he went to the Roigal Hotel, where he met Takamura. The next day, Lycaon went to the Ryōgoku Kokugikan for his match against Takamura. Before the match began, he was bothered by how silent the crowd is after the Makunouchi Ippo and Antonio Guevara match, since he wanted to silence the crowd with his skills. When the match began, Lycaon was able to land a wide left hook on Takamura, but before he could throw another punch, he was hit by a right, causing him to go down. The referee ended the match immediately, resulting in Lycaon's loss.

He is similar height to Takamura, and has a strong body. He wore a business suit to the Press Conference, and has a cleanly shaved face with trimmed haircut.

He is somewhat arrogant. Prior to the match, Keith was able to research Takamura (because of the information age), and he believes he knows Takamura's weakness. He thinks Takamura is a naked champion, and wants to show everyone.

The match doesn't last long enough to see his style, but chances are he is an orthodox fighter. 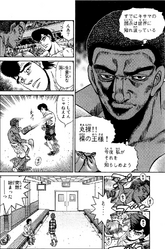 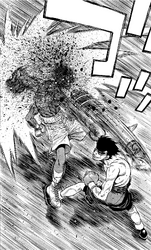 The End of the Match
Community content is available under CC-BY-SA unless otherwise noted.
Advertisement