Tatsuya Kimura (木村達也, Kimura Tatsuya) is a tritagonist in Hajime no Ippo.

He is a junior lightweight veteran professional boxer. Along with Makunouchi Ippo, Takamura Mamoru, Aoki Masaru and Itagaki Manabu, round up the core members of the Kamogawa Boxing Gym and the series.

His surname is Kimura. In Japan, surnames are listed before given names.

Kimura became a delinquent because he was bullied by an older boy, and when his father went to confront the boy's father, he was pressured and ended up apologising, this made Kimura lose all respect for his father, becoming more violent in both his house and outside, and decided to quit high school without his parents knowing. Kimura and Aoki Masaru were best friends since kindergarten. During high school, the duo were playing baseball in the Little League. In a summer tournament, they won against Kiyota and Kuwahara, taking what was most precious to them due to a bet: dirt from the Koshien Stadiumm and throwing it off a bridge.[2] Kimura and Aoki left baseball as they thought it was too easy due to not having any competition at the time.[3] They began brawling and causing trouble with students from rival schools, namely North High, which eventually led to their expulsion.[4] Kimura was the most affected by this because he was worried he had disappointed his mother. One day the pair attacked North High's Takamura Mamoru and lost miserably.

Seeing Takamura's strength as a boxer, they decided to join the Kamogawa gym to try and become strong too. Despite losing to him in every spar, they continued boxing until they had earned their pro licenses and stepped into the ring. Upon their winning of their individual debut matches the two realised that Takamura was no longer just their 'goal' but their inspiration and idol as well.

Kimura has fair skin with a muscular build. He has black hair in a flat top hairstyle and bangs going over his forehead, along with black coloured eyes and long, thin eyebrows. It is noted by Itagaki that Kimura is moderately handsome.

When Kimura was preparing to fight Yoshimoto Junpei, the hair on his head and elsewhere on his body was shaved cleaned by Ippo, to help him shave off some of his weight.[25]

During his delinquent days, he had a pompadour hairstyle and wore gold shades with green lens.

Kimura is a smart boxer with a good eye. He lives with his parents and helps them run their flower shop, but makes most of his living from his fights. He has been known to come up with his own original training methods, such as shadow boxing to music. He also tends to speak more politely and can often narrowly avoid Takamura's pranks through guile, and shifting the brunt of the blame on to Aoki.

He and Aoki are best friends and are sometimes referred to as Aokimura (青木村). He tends to be less hard on Ippo than the others and more willing to assist in his training, although he does still tease him occasionally. While Takamura and Aoki often show concern for Ippo, Kimura is the closest of the three of them to being an ideal senpai. He is not above being petty or jealous and gloating. An example would be when he refused to stop celebrating Mashiba's suspension and Sawamura's retirement (as it meant he had less obstacles for the belt), despite Ippo's protests.

Kimura's pathetic love life and constant lack of a girlfriend is a recurring joke in the series, and he even named his pet fish Reiko after a girl who broke his heart.

Like Aoki, he is also highly skilled at baseball, particularly as batter, but as the two of them became delinquents, they lost interest in the sport and abandoned it.

He originally wrote his given name in kanji as 達也, but switched to katakana as タツヤ after returning from a brief retirement.

Kimura, like Aoki, possesses a boxing ability that is largely downplayed for much of the series (albeit not quite as badly), with Kimura himself being defined as a jack of all trades, possessing a solid, all-around style with a firm grasp on the basics. Miyata stated that as a boxer, Kimura had no weaknesses (despite also not having any outstanding strengths) and Miyata's father said that although he was only ranked third before his fight with Mashiba, his talent surpassed that ranking.

Although renowned for having typically lukewarm boxing abilities compared to other characters in the series, Kimura has occasionally showcased bouts of talent, courage and willpower far beyond he is usually known for in his fights, specifically in his match against Mashiba; the latter himself later admitted that Kimura was his strongest challenger at the time.

As a fast out-boxer, Kimura is often asked to be a sparring partner for Ippo and one time for Miyata, though Kimura benefited more from Miyata's sparring.

In the lead-up to Kimura's fight against Mashiba, Miyata identifies Kimura's biggest flaw: as a well-rounded fighter he has no specific weaknesses, but he also has no strengths. Kimura comes to the same realization when he manages to slip pass Miyata's jabs, but realizes he has no plan of attack with the distance closed. Notably, his lack of a Sunday punch makes it difficult for him to intimidate his opponents.

While Kimura does come up with the Dragonfish Blow, he still does not have an emphasis on particular strengths, unlike Ippo's in-fighting or Miyata's counters. 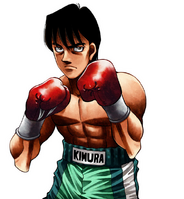 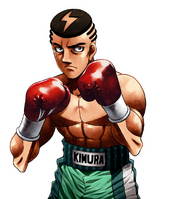 Retrieved from "https://ippo.fandom.com/wiki/Kimura_Tatsuya?oldid=74863"
Community content is available under CC-BY-SA unless otherwise noted.