Kintarō is a boxer at the Kamogawa Boxing Gym, trained under Makunouchi Ippo after being motivated to join the gym when he saw Ippo smack Aoki Taihei's face. He is also a former member of a group of delinquents that went against Taihei's school.

As a delinquent, Kintarō's group called out Taihei's group for a brawl. However, Taihei was the only one who came as his group quit school. When Taihei defeated four of the delinquents, Kintarō was the only one left. Before Kintarō could start fighting, Makunouchi Ippo knocked Taihei out with a opened hand slap, as Taihei made Ippo angry. With Taihei on the ground, Umezawa Masahiko had Kintarō to look after him until he woke up and to call an ambulance if anything went wrong.

Later, with Taihei, Kintarō decided to do way with being a delinquent and shaved his head. Kintarō and Taihei then contacted the Kamogawa Boxing Gym to tell the gym what happened and that they wanted to enrol. The two arrived and asked a bald Ippo to teach them boxing, and, after Taihei convinced him to, the two former delinquents were accepted and officially enrolled to the gym under Ippo. That night, Ippo asked who Kintarō was, which he then explained that he was there when Ippo stuck Taihei with his hand and sent him flying, causing Kintarō to respect Ippo highly after witnessing it.

The next day, Kintarō and Taihei went with Ippo to wait until the evening roadwork as Ippo fished with Mashiba Kumi. After seeing Kumi stroking and almost kiss Ippo's bald head, they asked Ippo how it felt, shortly getting frightened by Kumi's pressure as she claimed it was an accident and to forget about it. The next day, while sweeping outside the Kamogawa gym with Taihei and Ippo, they were attacked by Takamura Mamoru, causing the three to run away and begin their roadwork. The three then take a break under a tree. When Kintarō expressed his joy of entering a world where he gets praised for hitting people, he remembered Ippo's beliefs about violence, and added that he meant just as a sport. Kintarō and Taihei then received a lesson from Ippo about how they see boxing and that doing what is fun is not the same as doing whatever they want. The trio were then approached by Miyata Ichirō.

Kintarō and Taihei became angry at Miyata for his words towards his coach and they then began running towards him until Itagaki Manabu stopped them and pulled them away from their conversation. Itagaki informed them that Miyata is the OPBF featherweight champion. The two wondered who is stronger, but Itagaki wasn't able to answer them. When Miyata left, Kintarō and Taihei asked Itagaki why Miyata came. They then laughed, thinking little of the OPBF champion that he had to come to Ippo to figure things out. When Itagaki mentioned that he heard the words "punch drunk", Kintarō recalled that as the reason Ippo retired, however, Itagaki claimed that no one confirmed that Ippo was punch drunk and explained why Ippo chose to quit boxing. Kintarō and Taihei was then called over to Ippo to continue training. Later, Kintarō and Taihei were approached by Kumi, asking about Ippo's training with them, warning them to stop Ippo from doing anything dangerous as he is punch drunk. Kintarō then remembered what Itagaki claimed and realised that Kumi was the one who called Ippo punch drunk. After mentioning that Miyata visited Ippo, Kumi got angry and told the two to let her know every time it happens, leaving Kintarō agreeing while terrified of her pressure.

That night, Kintarō and Taihei went with Ippo to the Kōrakuen Hall, learning that the reason for Kumi's nervousness was that it was because of her brother's match coming up. Mashiba Ryō approached the three, making Kintarō and Taihei angry at Mashiba's attitude until they look at him, causing them to hide behind Ippo. Kintarō and Taihei entered the hall with Ippo while a match commenced. As Kintarō became excited about seeing a boxing match, Ippo explained to them how the intensity of matches go up boxers advance the number of rounds they are able to go. Kintarō then watched the main event with Mashiba going against JBC lightweight champion Iga Shinobu. After the first round, Kintarō was stunned witnessing Mashiba's skill, and then outraged when Iga's trainer struck Iga's face. Kintarō asked Ippo if he had been slapped during a match before. When he heard that he did, but it was for a different reason than with Iga, believing it to be a slap for a "win at any costs," Kintarō still could not accept it. When Mashiba won the match, Kintarō, Taihei, and Ippo met with Aoki Masaru and Kimura Tatsuya. It was soon decided that Kintarō and Taihei would go with Aoki and Kimura to the Kemuri Izakaya to let Ippo think about what he gathered from the match alone. Inside, Kintarō mentioned to Kimura, who kept saying his name wrong, that his name was not Kintamarō (金玉郎, with Kintama literally meaning testicles). As Aoki titled Mashiba a monster, Kintarō noted how Ippo claimed to had put up a fight against him. Kintarō and Taihei was then in disbelief when Kimura revealed to them that Ippo defeated him by knockout. They then continued their conversation about what they guessed what Ippo was about to say before they cut him off.

Later, Kintarō went with Taihei and Ippo to the Roigal Hotel where Takamura went to have a press conference for his middleweight title defence against Michael Goat. When it was over, Kintarō carried one of Takamura's champion belts as he expressed his excitement and asked many questions about the upcoming match. Kintarō and Taihei were then instructed by Ippo that they will act as support for his seconds and to watch the match closely, without blinking. The next day, Kintarō and Taihei arrived to the Ryōgoku Kokugikan with Ippo to watch Takamura's match against Goat and to act as support for his seconds. After Takamura won the match, Kintarō carried one of his belts to the Kamogawa gym, relieved that he can blink again. Pumped up from seeing the match, Kintarō and Taihei ran with Ippo, however they could not keep up.

With Kintarō's hair grown back, he continued his training with Ippo, doing roadowork for 6-rounders even though he was a 4-rounder. Kintarō then began throwing left jabs, responding to Ippo's "one" call from the numbering system. At the Kamogawa gym, with the gym members interested in the numbering system, Kintarō partook in the training as Ippo called off numbers to everyone. However, as Ippo only called out the number "one," the session to ended early due to the gym member's annoyance. Kintarō recalled that they had not did a celebration party for Takamura's win yet, however they discovered that Takamura left to go on a trip, postponing the party. When Sendō Takeshi went to Mexico, he made it to the magazine where he posed with the Scamaras brothers, shocking Kintarō and later hitting the mitts with Ippo. Later, a sparring tournament was being hosted at the Date Boxing Gym for newcomers who had not had a pro debut match. Kintarō and Taihei went with Ippo the the Date gym and, after getting reminded what to do, Kintarō quickly lost the spar, later apologising for embarrassing Ippo.

Later, Sendō and Hoshi Hiroyuki entered the Kamogawa gym as Kintarō shadowboxes. Kintarō then congratulated Sendō and Hoshi on their return as they head back home to Osaka. The next day, as Kintarō was with Ippo as he fished with Kumi, Kintarō and Taihei felt scared for his life as Ippo told her what happened with him and Aikawa during his school reunion, wishing Ippo would not give details to her for their sake. Kintarō and Taihei were then relieved when Ippo mentioned that he dropped a note with contact information she gave him, preventing contact. While doing roadwork with Ippo, Kintarō noticed Aoki and Itagaki, who had matches in four days, falling behind. Kintarō learned about the struggles of their weight control from Ippo, and that Kintarō would have to go through the same process to some extent. While Ippo was not worried about Aoki's condition, Kintarō asked about Itagaki, to which Ippo expressed his worry about Itagaki being in a slump. When Kimura, Itagaki, and Aoki's matches arrived, Kintarō and Taihei were tasked by Ippo to stay in the waiting room and watch over the waiting boxers.

Kintarō is a young man with straight black hair. As a delinquent, Kintarō dyed his hair blond,[1] and had straight shoulder length hair. In order to prove that he changed from his delinquent days, Kintarō shaved his head, which eventually grew back.

When Kintarō became a member of the Kamoogawa gym, Kintarō began wearing a white or a darker coloured variant of the Kamogawa gym brand shirt with black pants or shorts which became his usual attire. Kintarō's attire during the time he was a delinquent and was about to fight Taihei, he wore a white t-shirt and black pants.[2]. When Kintarō went with Taihei to ask Ippo to teach him boxing, he wore a gakuran with pants of the same dark colour.[3] When Kintarō went with Ippo to watch Mashiba's match against Iga, he wore a black t-shirt under a jacket and also wore black pants.[4] While Kintarō was with Ippo as he talked about Aikawa to Kumi, he wore a dark coloured shirt with white pants.[5]

Kintarō is shown to be hard-working when training with Ippo. When together with Taihei, the two will sometimes quarrel, causing Ippo to separate the two in a senpai-ly fashion.

Under the training of the battle experienced former boxer and former JBC featherweight champion Ippo, Kintarō has dealt with intense roadowrk everyday. Kintarō knows the basic boxing techniques by learning them via a "numbering system," which had Kintarō throw a basic boxing technique when Ippo called out a number, sometimes while doing mitt training with Ippo. Kintarō's fighting skill in the ring is unknown, however, his first spar ended in a quick loss. 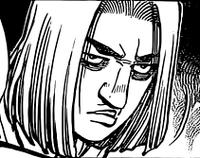 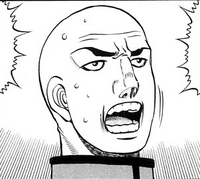 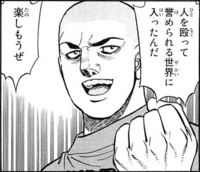 Bald Taihei and Kintarō wanting to become disciples of Ippo

Ippo, Taihei, and Kintarō sweeping in front of the Kamogawa gym. 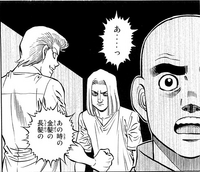 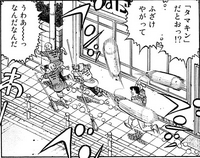 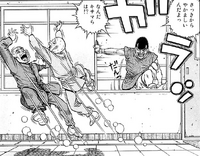 Takamura mad at Taihei and Kintarō's yelling outside.
Add a photo to this gallery

Taihei about to fight Kintarō. 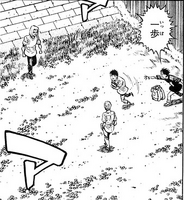 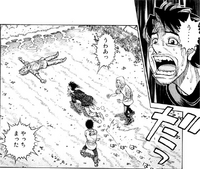 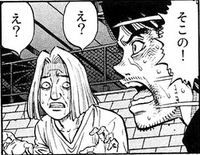 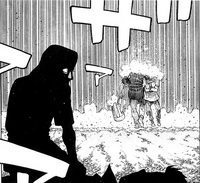 Kintarō looking after Taihei as Ippo leaves.
Add a photo to this gallery 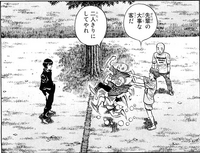 Itagaki holding Taihei and Kintarō back from attacking Miyata 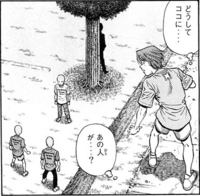 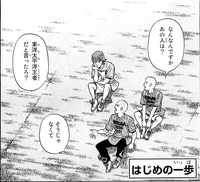 Itagaki talking with Taihei and Kintarō. 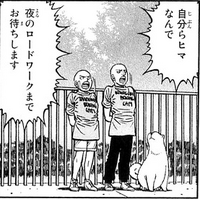 Kintarō and Taihei standing at attention while Ippo fishes.

Taihei and Kintarō scared of Kumi.

Taihei and Kintarō scared of Kumi. 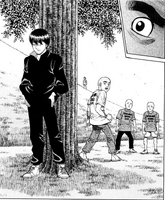 Miyata standing by tree.
Add a photo to this gallery

Retrieved from "https://ippo.fandom.com/wiki/Kintar%C5%8D_Kaneda?oldid=72244"
Community content is available under CC-BY-SA unless otherwise noted.