Hiroshi is a close friend with Akamatsu Isamu and they both joined Kamogawa Boxing Gym after Aoki Masaru's first title match and made him not retire. These three together make the "Aoki Team" with their leader, Aoki. Hiroshi partakes in boxing training at times and helps Aoki at the Chūka Soba

His surname is Kizakura. In Japan, surnames are listed before given names.

Hiroshi and Isamu were friends since elementary school and went to a very prestigious private school. Through elementary, middle, and high school, they never lost at competing at grades, letting them get away with anything they want.[1]

Inspired by Aoki's JBC lightweight title match against Katsutaka Imae, Hiroshi and his friend, Akamatsu Isamu, encouraged their idol, Aoki to not retire when he was on the brink. Hiroshi and Isamu went with Aoki to the Kamogawa gym to be introduced to the gym members. As Hiroshi only follow Aoki's orders, he ignored Takamura Mamoru's order of getting him juice until Aoki told him to do it. While Hiroshi and Isamu were sitting around the gym, they were dragged into doing roadwork with Itagaki Manabu and Kimura Tatsuya. As Hiroshi and Isamu were having trouble running, they revealed how hard their past and only like the scent of Aoki because he wins without trying. When Aoki arrived to the group, Hiroshi and Isamu ran to him for comfort.

Hiroshi went to the Ryōgoku Kokugikan for Takamura's first WBC junior middleweight title defence against Larry Bernard. Hiroshi, Isamu, and Aoki were kicked out by the venue's staff due to them trying to cheer with instrument. In the anime, they did not play instruments, and Hiroshi and Isamu instead expressed how there is a smell of an easy win. After Takamura's win, Hiroshi ran away with Isamu and Aoki due to Aoki being blamed for Takamura getting hit after using the Look Away. Later, since Makunouchi Ippo needed help reviewing his fifth JBC featherweight title defence opponent, Sawamura Ryūhei, Hiroshi was one of the gym members to be called to Takamura's home to try and help Ippo. The event ended when Takamura got angry due to the large number of people in his room.

When Hiroshi dropped books next to Itagaki containing information about techniques that he and Isamu were gathering, Itagaki grabbed them as he was seeking information about the Dempsey Roll. While nothing was in it of useful information, when Hiroshi held out his hand to grab it from Itagaki, he startled Itagaki which sparked an idea to Itagaki about the Dempsey Roll's methodology and the books were thrown back to them. When Alexander Volg Zangief visited the Kamogawa gym, Hiroshi and Isamu had Volg polish the Statue of Takamura before getting scolded by Itagaki for it.

When the Kamogawa gym members' matches arrived, Hiroshi and Isamu went to the Yokohama Arena. While Kimura was fighting Eleki Battery, the two gave details about Kimura's situation throughout the match. They also brought Tomiko to Aoki's room in the venue to cheer him up. Hiroshi and Isamu wished Aoki good luck, however the two thought that even if he loses, remembering Takamura's bet of giving Aoki Papaya Dachiu's haircut if he loses, it would still be good. When Aoki's match against Papaya began, Hiroshi watched and cheered for Aoki. During the match, Hiroshi and Isamu could smell that Papaya has the same odour as Aoki. Hiroshi watched as Aoki's match ended in a draw. When Miyata Ichirō was having his fourth OPBF title defence against Medgoen Dachboy, Hiroshi and Isamu reported to Aoki that Miyata was still fighting in the fifth round. making Aoki leave his room to watch in the audience area.

After Takamura won against WBC middleweight champion David Eagle, Hiroshi followed everyone as they went to Takamura's house to make sure he went to sleep. Hiroshi and the others were thrown out as Takamura was unable to sleep with everyone watching.

When Aoki's hairstyle was forcefully cut by Takamura to be like Papaya's, Aoki gained popularity after using the new haircut, which looked like broccoli, to star in a commercial advertising broccoli as "Broccoman." To support Aoki, Hiroshi and Isamu cut their hair just like his and wore the trademark t-shirt. Hiroshi and Isamu arrived to the gym with Aoki to show Takamura how Aoki's Broccoman brand has grown, causing a fight between Aoki and Takamura. to see who is more popular.

As Aoki was angry at Takamura for feeding him the pickled squid that made him sick and was tired of Takamura's actions, he tried to split the gym into two factions, with Takamura being alone and Aoki and the rest of the gym, including Hiroshi, along with him as Broccoman having the children of Japan on his side. Aoki's side changed from a lot of support to none when Yagi Haruhiko and Shinoda Tomoyuki revealed to everyone about how Broccoman's popularity has severely gone down due to recent reports of Aoki leaving the Kōrakuen Hall while covered in faeces.

Hiroshi went to the Ryōgoku Kokugikan to accompany Aoki while he waited for his match against Papaya as Kimura fought Eleki and informed Aoki details about Kimura's match. After Kimura's match ended in a draw, Hiroshi went to the audience area and watched Aoki's match against Papaya and explained to Ippo and Itagaki of Aoki's "operation ineffective action." Hiroshi watched as Aoki's match ended in a draw.

Hiroshi and Isamu followed Aoki and Kimura as they leave the gym. When Aoki warned Kimura that Itagaki may push him around due to him possibly passing him in the gym's internal ranking, Kimura believed that Hiroshi and Isamu would have his back, however, the duo ignored him.

As Aoki's Chūka Soba has been getting busier and advertised on TV, he hired Hiroshi and Isamu of Team Aoki to work there and had to close early due to the demand. After closing, Kimura and Itagaki entered and Hiroshi and Isamu were tasked to make ramen for them and Aoki. When the three boxers were discussing Hiroshi and Isamu's report chart about their boxing skills, Hiroshi and Isamu advised the three to step back when they look at Aoki's chart due to his ratings are so big that they surpass the paper's border. Hiroshi and Isamu went to the Yokohama Arena and watched Aoki and Kimura's matches against Ponsa Kureck and Sim Rex respectively, which ended in Aoki and Kimura's loss. Afterwards, Itagaki had the two watch over Aoki and Kimura to take them to the doctor if anything happens while they watched Miyata's match against Randy Boy Junior and Takamura's match against Ronald Duck, which both matches ended in Miyata and Takamura's victory.

When Takamura ate at the Chūka Soba and talked to Aoki, Hiroshi and Isamu were in the back cooking.

After Ippo defeated Kojima Hisato in his eighth JBC featherweight title defence match, Kojima received an autograph from Aoki. THe autograph was then thrown in the trash and was found by Hiroshi and Isamu. The two urgently reported to Aoki, prompting the three to go find Kojima.

When Aoki and Kimura's comeback match since their loss in the Class A Tournament arrived, Hiroshi went to the Kōrakuen Hall. Hiroshi watched Kimura end his match in an eight round draw and Aoki win his match by knockout in the eighth round. 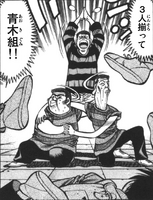 Thinking about new Hair cut
Add a photo to this gallery

Retrieved from "https://ippo.fandom.com/wiki/Kizakura_Hiroshi?oldid=75111"
Community content is available under CC-BY-SA unless otherwise noted.