With a match set for Bernard to go against WBA junior middleweight champion Mamoru Takamura, Bernard went to the press conference for the fight. Bernard gave his comment about how he would fight and how he would take the belt home with him. Takamura's comment about how he planned to not take a single hit against Bernard made him angry and embarrassed. At the Ryōgoku Kokugikan as the match was about to begin, Bernard wanted to get even at Takamura for looking down on him.

As the match began, Bernard immediately tried to attack Takamura. While Bernard was about to throw a punch, Takamura performed a Look Away while also turning his whole body around to try and fool Bernard into looking away. Bernard wasn't fooled and hit Takamura instead, breaking Takamura's no-hit promise. Afterwards, all of Bernard's punches were dodged and Bernard was knocked down after being hit with two rights. The referee quickly stopped the fight without a count, resulting in Bernard's loss.

He has sharp eyes, dark brown skin, a neatly trimmed beard, and a muscular, well-built body.

Bernard shows as a gutsy and confident person when being interviewed at the press conference for the main event of WBC junior middleweight title. He is also a serious person, as shown in the fight with Takamura. 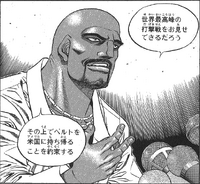 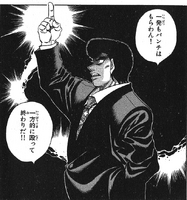 Takamura declaring not to get hit 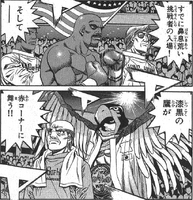 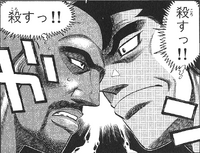 Takamura getting hit while looking away 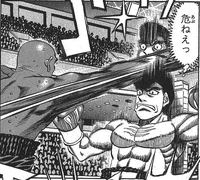 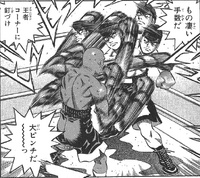 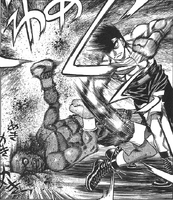 Larry Bernard with his team.