Márquez is a non-recurring place in Hajime no Ippo.

It is a convenience store in Japan where Miyata Ichirō works at. Notable customers are Aoki Masaru, Tomiko, Kimura Tatsuya, and Takamura Mamoru.

The manager argued with Miyata about the stray cat flyer on the window how no one will claim it. When she asked Miyata to keep the cat, he stated that his apartment building doesn't allow pets. Aoki and Tomiko then arrived at the parking lot of the store.

The manager refused to hear Miyata's statement of leaving. Eventually, Miyata decided to stay as Aoki and Tomiko came up to the counter. Aoki asked if the reason why Miyata's last match was bad, was because of weight management or because of a certain someone's retirement, Miyata avoided the question. As Aoki leaved, he claims Miyata shouldn't waited any longer and moved up to the next stage. Kimura then entered the store. Kimura stated that Miyata shouldn't be working at a convenience store, as he's one step away from becoming a world champion. Kimura was shocked after asking him what his wage is, as it is unusually high. Kimura then leaves, claiming that everyone has high hopes for him and to not squander his talent.

Takamura entered the store, asking about the missing cat flier, which he claims to have been missing for a week. After he heard Takamura say it's his cat and gives a description, Miyata claimed that it doesn't fit the description of Sarate. After making fun of Miyata for having a cat, Takamura stated that Miyata shouldn't be stuck in the same place and to live up to his potential. Miyata then asked for the manager to kick Takamura out. After that failed, Miyata called the police on him. 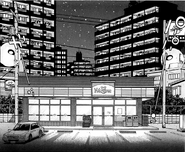 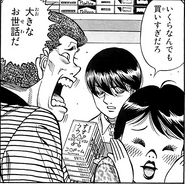 Takamura arriving at Márquez
Add a photo to this gallery

Retrieved from "https://ippo.fandom.com/wiki/M%C3%A1rquez?oldid=72347"
Community content is available under CC-BY-SA unless otherwise noted.