"The Dark Horse"
"The Weed"

He is a featherweight professional boxer affiliated with the Sayama Boxing Gym. He fought Itagaki Manabu in his debut match, and again in the All Japan Rookie King Tournament semifinals.

After becoming a boxer and losing his first two matches, his coach warned him that he would drop him from the gym if he lost his third match in order to prevent injuries.[3] Later during his road work, Makino ran into Tsuchiya Atsushi. Makino was asked if he was strong by the boy, to which he did not answer. However, Makino became encouraged to win his next match in order to give Atsushi courage for his surgery of which he was scared of.[4]

At Kōrakuen Hall, Makino faced the debuting Itagaki Manabu as his third match of his career. When the match began, Makino immediately attacked Itagaki, who was able to easily dodge and counterattack. Makino continued to swing wildly, but couldn't touch Itagaki. Not wanting to be let go from his gym, Makino headbutted Itagaki after missing a punch. As his opponent was telling the referee about the illegal move, Makino hit him, causing him to go down. When Itagaki got up, Makino launched an attack, which Itagaki dodged, however, Makino's elbow struck him, making him go down a second time, ending the match in Makino's victory.

After the match, Makino believed that he needed to continue to win in order to give Tsuchiya Atsushi courage for his surgery. It being the first win in his career, Makino was overjoyed by his victory against Itagaki, but his win was received with scorn by boxing fans who accused Makino of being a cheater. As such, Makino sought to continue winning his fights in hopes of disproving the naysayers while ironically developing a tendency to foul opponents. He later adopted the Hitman Style and Flicker Jab.

After winning the East Japan Rookie King Tournament quarter-finals by defeating his opponent using Flicker Jabs, he met Itagaki, Makunouchi Ippo, Itagaki Nanako, and Imai Kyōsuke outside the Kōrakuen Hall. He lauded the former with passive aggressive comments and openly expressed his jealously of the "elite" like him. As Ippo attempted to ease the tension, Makino took his leave, but not before stepping on Ippo's foot. While Makino was doing roadwork at a nearby hospital, he stopped to see Atsushi. Makino was determined to win in his rematch against Itagaki to give Atsushi courage during his surgery and to show him that anything can be achieved through hard work, even for "weeds" like him. He was later confronted by Iimura Mari, whom he revealed to her that he wishes to be like Ippo, who, through hard work was also able to achieve greatness from nothing.

When his East Japan Rookie King Tournament semi-finals against Itagaki arrived, Makino arrived to the Kōrakuen Hall and was shocked to see Atsushi there to see him before he left for the ring. When the match began, Makino started t pressure his opponent with Flicker Jabs, Itagaki soon learned his rhythm and adapted, countering all of them and landing several punches of his own. Makino, having not landed a single solid hit yet, became increasingly infuriated and lost his focus, falling victim to several more of Itagaki's strikes. After the gong sounded to signify the end of the first round, Makino's face was already completely swollen. A distraught Makino considered fouling Itagaki, but realised that he can't for Atsushi's sake.

In the second round, Makino used the rest of his strength and willpower to barrage Itagaki with a futile flurry of wide swings, resulting in Itagaki knocking him down. Makino slumped in despair on the ground as the count began, realising the difference in skill between Itagaki and himself. It was not until Atsushi got out of his wheelchair and begged Makino to get up did he decide to muster up the courage to continue fighting. In an attempt to fulfil his promise to Atsushi to win no matter what, Makino began attempting to foul against Itagaki, but the latter was unfazed and continued fighting. Though Makino finally managed to land a clean uppercut against his opponent, it was not enough and he was soon sent down. The referee immediately ended the match, resulting in Makino's loss.

Walking away from the ring, Makino hanged his head in shame. However, when Atsushi approached him and remarked that the match inspired him to have courage during the surgery, Makino was flattered, and told him that he would fulfil his promise to him and do his best for his next match.

Makino is a man with a muscular build, average height, and fair complexion. He has black coloured short unkempt hair with black coloured eyes. His eyebrows are short and sharp, his nose is short, and he has pronounced cheekbones.

At first, despite having a passion for boxing, Makino was portrayed as an awkward boxer with a meek attitude and a lacking in self-confidence. Prior to Itagaki's rematch against him, Makino's personality changed drastically, becoming unsociable and bitter. However, he was shown to be very friendly and kind towards Atsushi, his only true fan and supporter. After developing the Hitman-Style, Ippo notes Makino as having a similar style to Mashiba as well as a similar in-ring attitude to Sawamura Ryūhei. When he met once again with Itagaki face to face since their first match, his behavior towards him was aggressive and vindictive, also mocking Ippo by stepping on his foot when walking away. Makino is shown to be extremely jealous of the 'elite' class of prestigious boxers, like Itagaki, deeming himself to be a "weed". After winning against his first opponent with a foul, Makino developed a taste for fouling opponents whenever he deemed it necessary and wasn't against breaking the rules for his own gain. Despite this, he deliberately refrained from fouling Itagaki in their rematch due to Atsushi being a spectator, wanting to prove to him that even someone like himself could succeed through hard, honest work. However, he later ended up attempting to foul Itagaki as a last resort.

Early in his boxing career, he was a fairly unskilled boxer, swinging big, having weak punches and resorting to cheating out of sheer desperation to win. Later, he adopted the Hitman-Style, and developed fast, powerful Flicker Jabs that impressed even Mashiba.

Makino is overall a mostly average boxer at worst and a relatively skilled one at best. As such, he has far more trouble when boxing against those with greater experience and a superior skillset to him - the "elite" as he calls them. Despite a large display of willpower to win against Itagaki in his rematch, the latter was simply too strong an opponent for him, being only able to land a single clean hit against him. 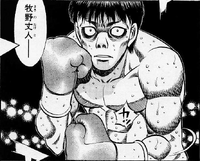 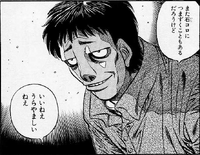 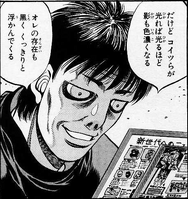 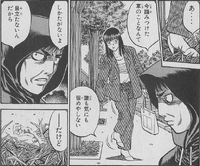 Retrieved from "https://ippo.fandom.com/wiki/Makino_Fumito?oldid=74609"
Community content is available under CC-BY-SA unless otherwise noted.