Makunouchi Fishing Boat (釣り船幕之内, Tsuribune Makunouchi) is a fishing boat business run by the Makunouchi Family. It is a key location in Hajime no Ippo, where the main character Makunouchi Ippo lives and works.

In order to spend more time home with his family, Makunouchi Kazuo bought a new boat with the purpose of starting the Makunouchi Fishing Boat instead of working an office job. Before he can start it, he needed to do one last job for a Commercial Fishing Boat before he can retire in a weeks time.

On his last commercial fishing boat job, Kazuo's Commercial Boat ran into bad weather with rough seas that caused the boat to start sinking. When Sakuma, a fellow crew mate, was trapped under a heavy object, Kazuo stayed on the sinking ship and lifted the object off of him instead of abandoning him to save his own life. After throwing Sakuma to the rescue boat, Kazuo ended up going down with the boat. After searching for a week, the rescue operation was called off and announced Kazuo's death.

After Kazuo's hat returned, Makunouchi Hiroko decided to continue Kazuo's dream of running Makunouchi Fishing Boat business. With the help of Sakuma and other crew members that Kazuo helped save, Hiroko had help starting the business. She got her Captain License (after 3 tries).

At the start of the story, Makunouchi Ippo doesn't have time for friends or school related activities since he needed to help his mother with the fishing boat. As he walked home after school, Ippo was stopped by Umezawa Masahiko and his gang. The group beguns to pick on and beat up Ippo, but they were stopped by Takamura Mamoru, who happened to be jogging by. Takamura took the unconscious Ippo to Kamogawa Boxing Gym, who then wakes up, surprised he's at a boxing gym.

While he was there, Takamura got Ippo to throw a punch at a drawing of Umezawa on a sandbag. When Ippo thrown a punch, the drawing was destroyed and sandbag moved a lot. After checking Ippo's body out, Takamura was surprised to find out that Ippo wasn't an athlete, and had a strong body from working on a Fishing Boat. Takamura given Ippo some video's of Mike Tyson's fights. After hewatched them, Ippo started to get interested in boxing wanted to be a Pro Boxer.

When Ippo was preparing to go to a training camp (at the beach) for his upcoming match against Saeki Takuma for the Class A Tournament[1], his mother fallen ill from Anemia caused by over work. When Ippo visited her at the hospital, Ippo finds out that she needed to be hospitalized for a month.

Instead of going to the training camp, Ippo decided to stay and run the Fishing Boat while his mom was hospitalized. While he rab the business, Ippo never realized how much his mother did or how hard it was every day. Hiroko wanted to close the family business for a month in order for Ippo to go the training camp, but Ippo doesn't want to do that since he believed their regular customers will go to another ship and might not return. She thought that might happen, where (in the past) she placed an ad for part time help. However, since it's long hours and very little pay, no one came.

She mentioned to Ippo that maybe they should close down the business since they don't make much money, and their spot in the port was worth quite a bit. Ippo wanted to know what she would do with the ship that his dad left them, and she doesn't answer. Ippo told her that he can do roadwork, sit-ups, and shadow boxing are thinks that he can practice with out going to the gym. Ippo started to think about retiring from boxing in order to help run the Fishing Boat full-time to help his mother[2]. Fujii Minoru stopped by and gave Ippo videotapes and information of Ippo's next opponent (Saeki), when he heard from Yagi Haruhiko that Ippo quit.

Ippo told him that its not like he stopped completely. He planned on becoming a regular member and dropping by the gym every so often. He told Fuji, even if he wanted to devote everything to boxing, he can't. He can't fight people of that level without giving it his all. So Ippo planned to take boxing as a hobby, but his career of being a Pro was over. Fuji mentioned that if Ippo's fans can't see Pro Boxer Ippo, it doesn't mean a thing. He came to stop Ippo from retiring since he thinks Ippo is the hope of the nation, and he doesn't want Ippo's talent go to waste. Ippo apologizes and Fuji ends up leaving while thinking boxing is like a drug, and Ippo won't be able to give it up. Ippo ended up watching the videos.

Ippo closed the Fishing Boat business during a Typhoon. During the Typhoon, Umezawa Masahiko ended up visiting Ippo. Ippo wondered why he was visiting, when Umezawa mentions he wanted to work on the Fishing Boat. Umezawa visited Kamogawa Boxing Gym, and they told him that Ippo never visited anymore because his mother was hospitalized. He wondered why Ippo didn't come to him for help.

Ippo thought he already had a job, but Umezawa told Ippo he quit it since he wanted to follow his heart for once. Ever since he was a kid, Umezawa wanted to be a mangaka. When he saw Ippo's last match, he realized that is what he wants to draw. So he quit the company he was working for, and now taking the first steps toward his dream. However, what he wanted to draw was perfect (in every way) representation of an actual boxer's rise to fame. He wanted to follow Ippo as he rises to become Champion. Umezawa's plan was work there where it gives Ippo time to practice, and given him material for his manga. If Ippo quits boxing, it will ruin his manga.

While he worked there, Umezawa started to realize how Ippo became so good at boxing. From carried 5 or 6 chests full of ice, balanced his body on the boat, cleaned the boat, and other tasked every day. After working 3 days, Umezawa thought about quitting because it was too hard but he noticed Ippo trained after a long day of work. The next day, Umezawa arrived early and tells Ippo to leave the loading to him and go do his roadwork. Ippo returned to Kamogawa Boxing Gym to continue boxing, after Umezawa started working for a week.

Prior to his match with Saeki Takuma in Round 139, Ippo's mother gives Ippo boxing Trunks (that Umezawa helped design) with Makunouchi Fishing Boat written on the back to help advertise the business. He tells Ippo not to get knocked out, since it will be bad advertising. (That ends up helping Ippo win the match.) Umezawa gives Ippo new boxing shoes too.

After his mother's death in Russia, Alexander Volg Zangief plans to go to restart his boxing career in America. However, before he does that he visits Ippo for help[3]. Ippo tells him he doesn't know anyone there, but he is sure Fuji or the coach can introduce him to lots a people. Ippo's mother tells Volg until he finds someone, he is welcome to stay there and not worry about a thing. While staying at Ippo's place, he helps work on the fishing boat and starts to see how an inexperienced Ippo was able to beat him.

In order to help Ippo prepare for his match against Sawamura Ryūhei, Itagaki Manabu gives Volg the solution to defeat the Dempsey Roll. When Volg sees how dangerous Sawamura is, he tries to get into to shape in order to spar with Ippo. During the spar, Volg show Ippo what Sawamura is planning to do, and ends up knocking out Ippo after holding back. After the spar, Volg leaves for the US, where Hama Dankichi will start coaching him.

After the Sawamura match[4], Umezawa picks up Ippo after his visit to Dr Yamaguchi's, where Ippo is told he can't train for a while. Umezawa tells Ippo that he likes working at the Fishing Boat with Ippo and his mother, and ends up thanking Ippo for it.

Ippo tells Umezawa he doesn't need to hold back, and believes Umezawa wants to quit. Umezawa tells Ippo it's not like he hates the job, but after seeing how hard Ippo's worked with his own eyes, he doesn't want to lose his dream of being a mangaka. Ippo tells him to go for it.

Umezawa mentions the promise he made to Ippo too, where he would be the first person to read his manga. There is a new author manga competition that he plans to enter. Itagaki, Aoki, Kimura, and Takamura all arrive to also read it, but they ended up destroying it instead. Instead of being mad about it, Umezawa happy since they fought over reading it. Ippo later on helps him remake the manga. Before Umezawa leaves, he apologies to Ippo's mother for bullying Ippo in high school. Ippo's mother tells him, "If you're going to be stepping into a whole new World, you can't walk with your head down. Always keep your head up and your eyes forward and do your best." When he leaves, Ippo tells Umezawa that he is his best friend.

With Umezawa gone, Itagaki Manabu starts working there for extra money. Itagaki tells Ippo that Umezawa gave him a call about it, where the position is a good job for boxers since it can help them train while working. While working there, Itagaki starts to realize it is good training for his equilibrium, build strong muscles from carrying ice chests with fish in it, and other tasks. During his next match, Itagaki starts to see improvement in his boxing.

To celebrate Ippo's recovery, Kamogawa Boxing Gym is using part of the prize puse from Sawamura match to take everyone fishing. Ippo tells them that his mother is preparing dinner for everyone, so be sure to catch a lot. In order to make it interesting, they decide to make it a competition where they team up into pairs. The team that gets the least has no dinner.

Yagi Haruhiko and Shinoda Tomoyuki, Aoki Masaru and Kimura Tatsuya, and Takamura Mamoru and Kamogawa Genji are the teams while Ippo drives the boat and Itagaki works.

During the course trip, Yagi and Shinoda show their talent at catching a lot of fish. Kimura and Aoki are able to catch some fish. Kamogawa and Takamura have no luck with it. Near the end of the trip, Aoki ends up falling in the water and Takamura ends up fishing him out.

After losing to Antonio Guevara, Ippo visits The Specialist to see if he is punch drunk. While finding out that he is physically fine, and chance to recover to 100% over time, Ippo decides to quit boxing since it was a wake up call. With Ippo now working full time at on the Fishing Boat, Itagaki ends up quit and working as a security guard.

Makunouchi Fishing Boat in the manga. 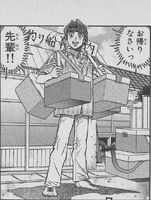 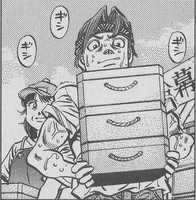 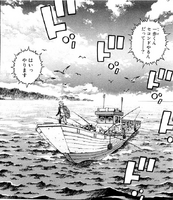 The boat in the manga.
Add a photo to this gallery 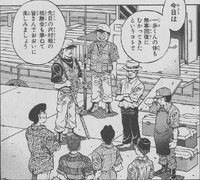 Start of the Trip 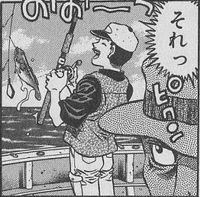 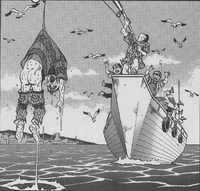 Takamura's big catch
Add a photo to this gallery

Retrieved from "https://ippo.fandom.com/wiki/Makunouchi_Fishing_Boat?oldid=70578"
Community content is available under CC-BY-SA unless otherwise noted.