Makunouchi Kazuo (幕之内一男) is non-recurring character in Hajime no Ippo.

He was Makunouchi Ippo's father and Makunouchi Hiroko's husband. He was the founder of the Makunouchi Fishing Boat.

Kazuo was a Fisherman on a Commercial Fishing Boat that is gone for long periods of time. It been mentions that he loved getting into fights. According to Makunouchi Hiroko, he imaged his opponent as a Fish.

During the fishing trip, the ship was wrecked by a storm and rough sea. As the ship was sinking, Sakuma (a crew member) was trapped under a heavy object. Sakuma wanted Kazuo to leave him in order to save himself, but Kazuo stayed and lifted the object off of him. He throws Sakuma to the rescue boat, and stays on the sinking ship as it goes down.

After a few weeks of searching, the rescue operation for Kazuo was called off and he was declared dead. Young Ippo believe his father would returns, waits beside the dock for his return since he promised he would return. Later on, Ippo heard a voice in the middle of the night, while he was waiting at the dock for his father to come back, and he found his father's newly bought hat. Hiroko believes Kazuo return once he saw how stubborn Ippo was waiting for him to return.

He looks similar to Ippo, but more rough looking and signs of a beard growing. 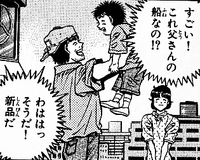 Kazuo with Ippo and Hiroko 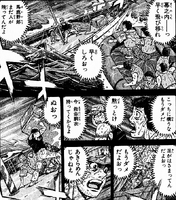 Ippo waiting for his father to return 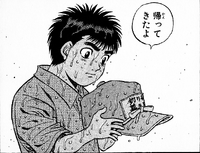 Ippo find his father hat
Add a photo to this gallery