He is a featherweight professional boxer from the Philippines and the former reigning featherweight National Champion of his home country. He was known as "The Magician" for his various tricks and deceptive tactics.

Unorthodox Style
(based on Out-Boxing principles)

Prior to his boxing career, Gedo was raised in a miserable life of poverty, being forced to pickpocket just to survive. However, one such effort proved to be disastrous for Malcolm, and his actions earned him a bullet to the shoulder and midsection. Traumatized by this event, Gedo swore to himself that he would never be stricken by poverty again, and took up boxing to achieve a life of wealth.

Though Gedo once had the spirit of a true boxer, and had ambitions of reaching the world stage by challenging the OPBF, his hopes and dreams of getting to the world circuit were soon shattered after a crushing defeat against fellow Filipino boxer Randy Boy Junior. Soon thereafter, Gedo had become a shallow scam artist, and thus was only focused on earning as much money as possible, even if he were to sacrifice his boxing pride.

Prior to his fight with Makunouchi Ippo, Gedo lost against Japanese ranker Fukui Kyosuke. He was skillful enough to control the fight and lose without making it blatantly obvious, surprisingly even Fukui. Kamogawa Genji, upon discovering the fixed match, laid down 2 million yen as prize money to goad Gedo into fighting seriously. Despite this, Gedo still did not care who his opponent was and offered the same deal to throw the match to Ippo. Ippo refused and offered his own cash reward if he managed to knock him out.

Gedo's skill in boxing lets him take Ippo into the eighth round, a feat no other opponent has managed to achieve before their match. He ultimately loses however, when he is sent flying by Ippo's devastating barrage of Hooks and a finishing Uppercut. Despite his loss he was still being acknowledged as an amazing boxer.

Although he claimed he still had his boxer's pride, he still took the fight money offered by Kamogawa and indicated that he would not change his ways at all, continuing to fight as a magician and, to Ippo's disappointment, fixed matches.

About a year later after his match with Ippo, a young challenger by the name of Antonio Guevara crossed paths against him for the national championship title. Gedo took a down in the first round, but according to Yagi Haruhiko he tries his best to regroup but he lost his rhythm and the moment turned against him. The match ended with a decision loss for Gedo. Even though Gedo was an expert with his left, he wasn't able to use it because he was facing a Southpaw. Antonio Guevara is the new Filipino Featherweight Champion.

Later on, Guevara's trainer is seen going to Gedo to find information about Makunouchi Ippo, but Gedo ends up scamming them for money instead.

Gedo possesses a muscular but flexible dark skin toned body He is depicted as a bald man with eyes that are low in depth, giving him a mocking yet menacing look in addition to his fearsome reputation. Gedo has prominent cheekbones. He also sports a scar on both his left shoulder and midsection from bullet wounds he received before initiating his boxing career.

Gedo is an insanely greedy individual and is completely shameless in his attempts to gull or swindle other characters for their money. His exploitative nature is usually played to extreme altitudes and he will happily accept bribe money to throw his own fights. Gedo is noticeably one of the few antagonists in the series to not turn a new leaf after fighting Ippo, (such as Sawamura Ryūhei or Jimmy Sisphar) as he openly admits that he will continue swindling and scamming other people, upsetting the latter. Despite his ill-natured behaviour, his desire for money stemmed from a traumatic event in his childhood in which he was shot for stealing money to survive; Gedo from then on swore to never be stricken by poverty ever again, an oath that he has obviously taken to over-exaggerated lengths. Everything has a price to him and he sees the ring as just another place for business. When pressured in the later rounds against Ippo however, Gedo shows genuine fighting spirit, something he had lost after his fight with Randy Boy Junior.

Gedo is highly intelligent and an unorthodox Out-Boxer who relies on tricks to confuse his opponent. He is known as "The Magician" for his tricks inside the ring and is known to wear his left glove with the strings loosened in order to throw a jab with an unclenched fist, giving off the impression that his reach is longer due to the glove's momentum with every punch. However, when pushed, he has shown great fighting spirit and real boxing skill.

Although he is regarded as a boxer with all parameters above-average, he has no outstanding physical strengths and endurance. 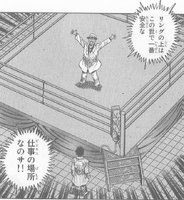 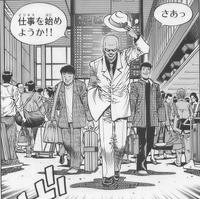 Gedo down first round

Antionio Declared Winner
Add a photo to this gallery

Retrieved from "https://ippo.fandom.com/wiki/Malcolm_Gedo?oldid=71587"
Community content is available under CC-BY-SA unless otherwise noted.