He is a professional boxer and former Muay Thai kickboxer from Thailand, who fought Miyata Ichirō in his fourth OPBF title defence. He is formerly affiliated with Mr. Sakaguchi.

Medgoen's daughter, Maria, was sick and on the brink of death. He didn't have enough money to pay for medical attention. He was approached by Mr. Sakaguchi, who offered Medgoen a lot of money to work for him, with a task to go a full ten rounds against the OPBF featherweight champion, Miyata Ichirō. With the need for money to cure his daughter, Medgoen accepted without a second thought.[4]

When it was time for his match against the OPBF featherweight champion, Miyata Ichirō, Medgoen arrived to the ring at the Yokohama Arena. When the match began, Medgoen stayed completely on the defensive, not attempting to hit Miyata even once until the fifth round, where, after his guard broke, he threw a short left hook, which hit Miyata's guard. After Medgoen retreated, Miyata followed and began an in-fight. Medgoen, realising Miyata was doing risky in-fighting even though he could safely win with just out-boxing, decided to fight back as he felt Miyata's fists were telling him to fight like a man. Medgoen threw short left and right hook combinations on Miyata's block. Medgoen's attacks were starting to get countered, and he almost fell before catching himself. Medgoen tried to attack Miyata with a straight, however, he got hit by a Cross Counter, causing him to fall. After getting up, Medgoen charged for an attack again before being knocked down by a stronger Cross Counter. The referee quickly stopped the match, resulting in Medgoen's loss. Before being taken out of the ring on a stretcher, Medgoen told Miyata "อย่าแพ้" (yaa phae) which means "don't lose" in Thai.

He has shaggy black hair and dark skin. Being a boxer and former Muay Thai kickboxer, he has a muscular body. His eye colour is green and he possesses a dark sclera. His ring attire consists of boxing trunks that are red, blue, and black, along with an elephant symbol on the lower left.

Medgoen even among the Muay Thai ranks, where boxers are known to be good at taking hits, he was known for his toughness. During his fight with Miyata he took many body without any visible signs of exhaustion, with Sakaguchi noting from his corner that no matter how many body blows Miyata thew at him he wouldn't be affected at all.

For the offensive part, Medgoen possessed short and sharp hooks, that he could throw them as a combination in manner very similar to Makunouchi Ippo's Dempsey Roll. 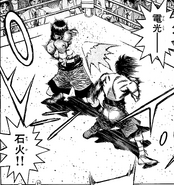 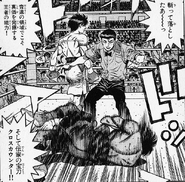 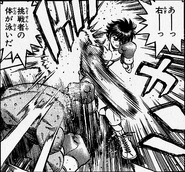 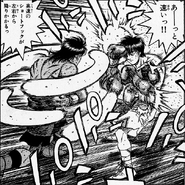 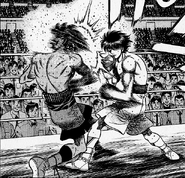 Miyata wins
Add a photo to this gallery

Retrieved from "https://ippo.fandom.com/wiki/Medgoen_Dachboy?oldid=74727"
Community content is available under CC-BY-SA unless otherwise noted.