When Goat became ranked first in the WBA and WBC, he was scheduled to fight against WBC and WBA middleweight champion Takamura Mamoru. At the press conference press prior to his match, Goat apologised to Japan that he has came to love since he planned to defeat their hero, by giving him his first loss, and taking the WBC and WBA belts home with him. The next day, Goat went to the Ryōgoku Kokugikan for his match against Takamura.

When the match began, Goat used his lefts from a distance to keep Takamura out of range, and a right short uppercut when he got close. Goat was able to force Takamura tighten his guard, however, despite the guard, Goat pushed him to the ropes. Goat and Takamura entered an exchange, where Goat was able to dodge and block Takamura's attacks while landing some of his own. When Takamura tried to throw a full swing left hook, Goat landed his own left hook instead. Goat's high speed combinations shut down Takamura's advance until the end of the first round, with Goat winning the points.

In the second round, Goat dodged Takamura's wide left hooks. When Takamura left himself open after missing a left hook, Goat tried to hit him with a one-two, however, his left jab was blocked and the right straight was countered. When Goat saw another wide left hook coming, he blocked the right side of his face. However, Takamura changed the trajectory to make the hook into a straight, catching Goat off-guard. Goat was hit with the left straight and went down. After getting back up, Goat attempted to block another incoming left hook, however, Takamura changed it into a left body blow, causing Goat to get hit and go down again. The referee ended the match immediately, resulting in Goat's defeat. As Goat exited the ring, he was clutching his stomach as he was helped out by his coach.

Goat has dark skin, short dark hair, and a goatee with trimmed moustache. He also has long, thick black eyebrows. During a press conference, Goat wore a light coloured suit with black vertical stripes over his black dress shirt and tie, along with light coloured pants with black vertical stripes. During his entrances to the ring, he wears a robe that has a goat head symbol on the back, with goat horns on the hoodie.

He is a well-mannered individual who, in a short visit, loves the people in Japan.

Not much is known about Michael Goat's ability other than the fact that he is an extremely technical boxer who would not fall for any huge swings. He's also capable of hitting Takamura in the first round, forcing Takamura to tighten his guard. It was also worth noting that Takamura thought of Goat's hand speed as punches that came out of nowhere, meaning that it's very fast, also unique in rhythm.

Not only his punches, he's also capable of circling around the ring with his footwork, as well as his weaving that can avoid even straight punches.

Although Goat is a Boxer-Fighter type, he can't exactly handle punching power as a proof of his match against Takamura where he was nervous of the punches landed on his guard, and those same punches were delivered to him, ending the match in an instant.

Despite him being a technical fighter, he's not ready for feints being setup, an example is him getting used to huge swings, causing his expectation for straight punches to diminish in the match even more, causing his defeat.

Start of the match 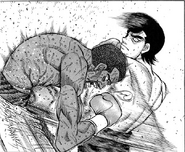 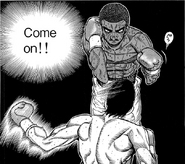 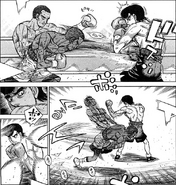 End of the match