His surname is Miyata. In Japan, surnames are listed before given names. Miyata's given name is currently unknown.

Formerly JBC and OPBF featherweight champion, he was an acclaimed boxer with hopes of challenging the world, whose style and technique were a source of admiration for his son, Miyata Ichirō. While in the final round of his seventh title defence, he was defeated by Racoon Boy, with what many refer to as "a lucky punch", despite having the lead in the scorecards. He sustained a terrible injury to his jaw, but it was his mental state that suffered the most.

Unable to overcome his feelings of helplessness, he was convinced that his style was not good enough to defeat raw strength. The defeated champion abandoned the opportunity to make a comeback, and retired permanently from boxing. After retirement, Miyata begins working at the Kamogawa Boxing Gym as a boxing trainer, and his son's personal coach.

When Takamura Mamoru brought in Makunouchi Ippo, Kamogawa Genji had Ippo spar against Miyata Ichirō as a test. Miyata was Ichirō's second for the sparring match. After his son's victory, Miyata became shocked when he found Ichirō in the shower room with bruised arms. When the day of the rematch spar arrived, Miyata was his son's second for the spar. After his son's defeat at the hands of the newcomer Ippo, who they both largely underestimated, the father-son duo decided to quit the gym, with hopes of settling the score in an official match. They later joined the Kawahara Boxing Gym, where they began preparations for the upcoming East Japan Rookie King Tournament.

In Ichirō's first match in the East Japan Rookie King Tournament, Miyata was his son's cornerman for his match against Takada Teruhiko.

After Ippo won his match against Hayami Ryūichi, Miyata informed his son. On the day of Ichirō's match against Mashiba Ryō, Miyata was his son's cornerman, with Ichirō eventually losing the match. After his son's lost, he saw Ippo and sent him a message he got from Ichirō, "Forgive me.".

With his son wanting to remove the gap between himself and Ippo, Miyata and his son left Japan for Korea and Thai to fight their strong boxers. Their first boxer overseas was against Rusak Paddy. When the match went to decision, it resulted in a draw, this angered him. He tried to argue the decision, but to no avail. After leaving the ring, he talked to Kida about how important this first match was to Ichirō, as Ippo recently got ranked fifth and Ichirō wanted a performance to match it. Within two months in Thai, at Pataya Beach, Kida informed Miyata that Jimmy Sisphar requested a match against Ichirō. He then asked to turn down the offer. When his son discovered that he turned down the offer, Miyata told Ichirō that his next match would be junior lightweight and to forget about Ippo. Ichirō argued the decision, wanting to fight Jimmy, not wanting to run from his diet and Ippo. He then revealed to Ichirō that his counter would not work as his punches are light. His son knew this, however, Ichirō still wants to fight Jimmy, believing that if he accepted his fists betrayed him, he would not be able to fight again. Miyata then remembered thinking the same thing back when he wanted to retire.

After witnessing his son sparring with Payao, he realised that Ichirō was getting closer to the counter to surpass all counters. At the Lumpini Stadium, Miyata and Kida left Ichirō alone as he seemed nervous. Kida believed the new counter may work for Jimmy, however, Miyata stressed the risks behind the counter. When the match began, Miyata was the second for Ichirō. After Ichirō won the match, Miyata, Ichirō, and Kida left for Korea in order to challenge more strong boxers.

In the anime, Miyata was one of the cornermen when Ichirō fought against Li Chon Pir as his first opponent in Japan after returning from overseas where he won by knockout.

When Kimura Tatsuya's title match against Mashiba was announced and Ichirō had an OPBF title match scheduled, Ichirō agreed to spar with Kimura. Miyata met Kimura outside the Kawahara gym, warning him not to get hurt by his son. Miyata then watched as Ichirō and Kimura sparred. When Kimura came back after having stopped coming to the gym for a while, Miyata mentioned that he already got another sparring partner, leaving no reason for him to be at the gym. Ichirō however, decided to spar with him as Kimura was the one with the reason.

While discussing Ippo's first title defence win against Sanada Kazuki with Ichirō, Miyata told his son to let Ippo stand on top of the nation and for him to pass over to the OPBF title to ask Ippo for a match from above. One week before Ichirō's match against the OPBF featherweight title match against Arnie Gregory, Ichirō sparred with Kimura. After Ichirō fell three times, Miyata stopped the spar to prevent further injuries. He then explained to Kimura the situation regarding Ichirō's weight management. Kimura asked Miyata why Ichirō won't go up to the lightweight class, however, Miyata had already told him to countless times, but the rivalry between him and Ippo won't let him go up a class. Later, Miyata watched as the Kawahara gym hosted Gregory's public sparring session where Mr. Sakaguchi revealed that they were holding back a technique called the "Bloody Cross" after making comments where he looked down on the Japanese and Ichirō. Later, Miyata attended Ichirō's weigh-in where he passed at full limit. They then went to the Restaurant Monza Italia to replenish some of Ichirō's water and power. While eating, Miyata became worried about Ichirō's weight control, comparing it to shedding a pencil until the lead point breaks.

The next day, Miyata and Ichirō arrived to the Kōrakuen Hall for the OPBF featherweight title match against Gregory. Miyata was reluctant to open the door to the ring, expressing his worry to his son as he himself lost in an OPBF title match. Ichirō reassured his father that he would prove his boxing works in the OPBF and beyond. After the first round of the match, Miyata warned Ichirō that if he gave Gregory time, he will recover, instructing him to pressure him while he is still damaged. After the second round, Ichirō expressed how he planned to use his remaining strength to hope to land a lucky punch. Miyata told Ichirō that there are no such thing as lucky punches in boxing and that a punch that manages to hit from fists that aren't alive can not knock down an opponent, while punches from a living fist can. When Miyata saw Ichirō's face after the third round, Miyata sensed that it would be the last round as he finally reached his limit. After Ichirō defeated Gregory in the fourth round, Ichirō became the OPBF featherweight champion.

At the Kawahara gym when Ichirō explained how the Dempsey Roll is weak to counters, Miyata believed that that was the reason for the Kamogawa gym to turn his son down, commenting on Ippo's poor luck that his weapon is vulnerable to Miyata's weapon, however, he assumed that Kamogawa has countermeasures since he is not the type to run away.

Miyata was one of the cornermen when Ichirō fought against his opponent during his eighth OPBF title defence where he won by decision after twelve rounds.

Miyata's father shows obvious telltale signs of old age and, despite being a boxer in his younger years, has lost a significant amount of muscle mass. He has discoloured hair that shows little signs of balding, eyebrows of average thickness, a comparatively large nose and expressive eyes with small dark pupils. His cheekbones and dimples are also shown to be quite prominent in his old age.

In his younger years as a boxer, he was shown to love boxing and his own style of boxing with great passion, a passion he passes on to his son Miyata Ichirō. He appeared confident and was considered a world contender in his prime form. Consequent to his pride-shattering loss against Randy "Raccoon" Boy he retired, melancholic on the fact that his technique was no match for raw strength in the long run. Since then he has been acting as his son's personal trainer, retaining a keen eye and focused seriousness for boxing as he had in his younger years, but little of the enthusiasm.

Miyata's father was an out-boxer who used the same style that his son uses. It was shown that he could win his fights by points, but he would rather finish fights by KO (which lead to the loss to Randy "Raccoon" Boy). He lacked power so he would use counters as his primary weapon to finish his opponents. He used extraordinary speed, timing, and courage. It is revealed that his skills were far greater than his son, when Yagi states that Miyata (who was at the time the OPBF champ and a world ranker) "still has a long ways to go." It is possible that he has the same level boxing sense as genius Itagaki Manabu, since Kamogawa mentions that he experienced the "above ring perspective" that Itagaki experienced during his match against Saeki Takuma.

Like his son, he lacked power in his regular punches. It's also possible that since he has the same style as his son that he shared the same predictability as well. He was not plagued by weight control like his son so stamina was not the problem. 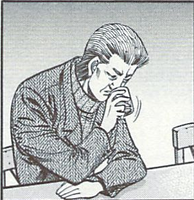 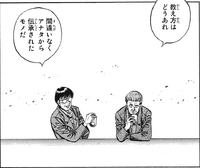 Miyata Sr with Yanaoka drinking and talking about the past 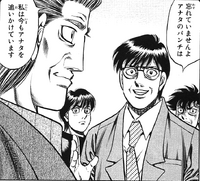 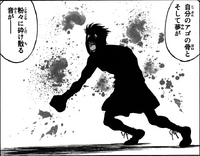 young Miyata Senior
Add a photo to this gallery 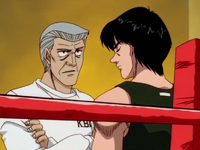 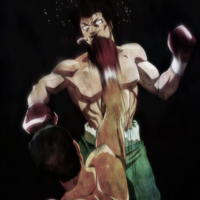 Miyata Sr. in his youth as depicted in the anime. 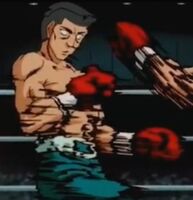 Retrieved from "https://ippo.fandom.com/wiki/Miyata_Senior?oldid=72552"
Community content is available under CC-BY-SA unless otherwise noted.