Miyazaki (宮崎, Miyazaki) is a semi-recurring character in Hajime no Ippo.

He is a customer often seen at the Makunouchi Fishing Boat. He sometimes ask Makunouchi Ippo about his boxing.

When Makunouchi Hiroko mentioned to Miyazaki that Ippo was starting boxing that she was against it, Miyazaki mention that you can't deny the blood. Since Ippo's father was usually calm too, but his arm was the best around. Miyazaki was also impressed with Ippo's strong body at being able to carry many ice coolers full of fish on a wavy environment. He told Ippo that boxing will prevent him from rebelling and advised Ippo to look after her, leaving Ippo confused about the message.

Ippo asked Miyazaki if he knew any doctors that could look at his broken hand to see if it were possible for him to fight Sendō Takeshi. Miyazaki gave Ippo the name of Yamaguchi Tomoko.

When Ippo returned home after Takamura Mamoru's title defence, his mother was returning home after taking a group of customers (with Miyazaki) night fishing. As Ippo helped unload the boat, Miyazaki learned that Ippo had no upcoming match set yet, despite being ranked 10th in Japan. He also noticed that Ippo's became much more confident in the past 2 years. He wondered if Ippo is more popular with girls as he gets more famous, and he told Ippo to be careful not to get tricked by them. As he began leaving, he told Ippo that he will be cheering for him to become the Japanese featherweight champion, and that he should take his mother sometime.

After Ippo learned his mother collapsed, he rushed toward the hospital where he met Miyazaki. Miyazaki told Ippo that his mother was sleeping, and that she will need to be hospitalised for about a month. He mentioned that she fell down after they got off the boat, where it was from anaemia caused by overwork. He added that she is stubborn, where she probably didn't want Ippo to find out that she has been working too hard lately. As he leaves, he told Ippo that she should be tired and to let her rest for now.

After Ippo's weigh-in with Sanada Kazuki, Umezawa Masahiko, Hiroko, Miyazaki, and the other fishing boat customers got together and welcomed Ippo home. Miyazaki told Ippo they decided to be his cheering squad for his title defence. Miyazaki displayed a banner to Ippo for cheering him on that they planned to bring with them for the match. Umezawa and Hiroko also gave Ippo a new pair of red boxing trunks with stars on them along with new boxing shoes.

As Miyazaki and the rest of the fishing crew get ready to set out to the water, Umezawa warned the crew about the rough waters. When Umezawa wondered how Ippo was able to stand on the worst part of the boat, Miyazaki explained that he was raised on the water, and commented how Ippo had learned to shift his weight perfectly. When it was time to get ready to fish, Miyazaki threw up along with the rest of the crew due to the rough waters.

After returning from a fishing trip, Miyazaki mentioned they was able to catch a lot thanks to crew. They told Miyazaki and the other fisherman to leave their gear and supplies and they will carry it for them. Miyazaki was impressed after seeing Ippo carry it all, where another fisherman thought it normal for the Champion, but Ippo told them he been doing this longer than boxing. When Ippo and Itagaki noticed Hiroko trying to carry the heavy stuff, they told her to leave the heavy lifting to them, while she carried the small stuff.

While out fishing, Miyazaki asked Ippo if he was still practising boxing. Though disappointed after hearing Ippo not boxing, he noted how Hiroko looked healthier due to Ippo helping out more.

Miyazaki saw Ippo was trying to look for something, he mentioned to Ippo that he should get higher up for a better look. But Ippo told him that his friend was all the way across the ocean, where there was no way for him to see him from here.

Miyazaki is a middle-aged man with black hair slicked back and has a short beard. While fishing, he wears a fishing vest over his dress shirt along with pants, fishing hat, and sunglasses.

Miyazaki has been a long time customer of the Makunouchi Fishing Boat and friend to Makunouchi Kazuo. He is a professor of physical education at a university, but he enjoys fishing as well. He also has a judo and karate background. 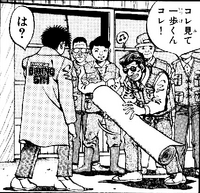 Unveiling the cheering banner.
Add a photo to this gallery

Retrieved from "https://ippo.fandom.com/wiki/Miyazaki?oldid=70133"
Community content is available under CC-BY-SA unless otherwise noted.