Wiki Ippo
Register
Don't have an account?
Sign In
Advertisement
in: Characters, Characters from the Philippines, Male Characters,
and 6 more

Morris West (モリス·ウエスト, Morisu Uesuto) is a middleweight boxer from the Philippines who fought Takamura Mamoru in the "APOCALYPSE NOW" event.

After leaving the middleweight class, West went down to junior middlweight and challenged Takamura Mamoru for his world ranking. At the Kōrakuen Hall when the match was about to begin, West was warned by his coach that, while he was lucky that Takamura failed his weight management, to watch out as he is still a world ranker. As the match started, Takamura quickly rushed at West and began attacking West's strong guard. When Morris let down his guard, Takamura was able to land a right straight on him, however West showed no signs of taking damage from it. Takamura continued to attack, but West just calmly stared back at him after taking the punches since they didn't have any power behind it. After seeing that, Takamura decided to back off, since he was trying to trick him with speed since he doesn't have his usual power. Takamura tried to bluff West, and get him to come to him, but West knew that Takamura would try to land a counter on him. After realising that, Takamura was angry and started attacking, but could not land any hits. The gong then rang for the end of the first round. During the break, West's coach noted that Takamura's colouring wasn't coming back, and he will continue to self destruct as long as West held out and gave it time. West believed this match will be an easy win.

Takamura continued chasing West, who landed pulled back punches to prevent Takamura from countering from the second round to the sixth, where Takamura began to show exhaustion as he slowed down. Confident that Takamura had no power anymore, West began to throw full powered punches. When West was about to throw his finishing blow, Takamura threw a counter while trading punches, but Takamura lost in the exchange of blows with him. West attacked again, but Takamura clinched in order to buy time. While clinching, Takamura became distracted when he saw Bryan Hawk, and became angry as West continued attack him. West and Takamura then began an exchange match. After trading counters, West shown signs that it was effecting him. They continued trading punches as Takamura started to come out on top. West was now against the ropes, and Takamura landed a punch that knock him out of the ring and in front of Hawk, resulting in West losing by a ring out.

West has a dark skin tone and muscular body of average height. He has black coloured eyes, thick eyebrows, and short messy black coloured hair. West's face appears to be quite rugged, and his cheekbones are quite prominent through his dark skin. He also has an amount of visible wrinkles and skin creases. In the ring, his attire consists of blue boxing trunks with a red name label, having "WEST" in yellow writing.

West has an attitude of a champion, and easily underestimated Takamura due to the latter's failed weight control prior to their match. Overconfident, he thanked Takamura silently from his own corner for giving him an "easy world ranking", but is subsequently shown to be shocked at Takamura's powerful comeback and his own loss.

West shown to be a calm and cautious out-boxer that wasn't fooled by Takamura when his power wasn't working on him. 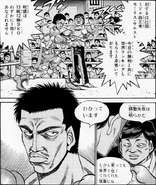 West with his coach 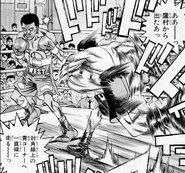 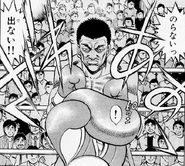 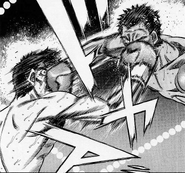