Inaba Minoru
Mr. Sakaguchi (Mr.サカグチ, Mr. Sakaguchi) is a Filipino manager in the OPBF. Mr. Sakaguchi is infamous for his impure motives and abandoning boxers who fail him. He has had a personal vendetta against Miyata Ichirō since he defeated his client Arnie Gregory to become the OPBF champion and is willing to do anything to end his career.

After Arnie Gregory finished off his sparring partner in a public spar for his OPBF title defence against Miyata Ichirō, Mr. Sakaguchi told the reporters that they were taking applications for future opponents. A reporter mentioned the match with Miyata was already set. Mr. Sakaguchi agreed that Miyata was sensational, however, Gregory won't lose. After further comments, Īmura Mari told him about Miyata's strength and believed that a boxer like his who is proud of his strength will find himself spinning his wheels and the joke will be on him. Mr. Sakaguchi believed that the Japanese reporters were blind and then revealed that they were holding back a technique called the "Bloody Cross" which would be shown during the match.

At the weigh-in, Miyata doesn't shake hands with Gregory, and mentioned to Mr. Sakaguchi that instead of searching for the next opponent, he should be searching for his next job once the match was over as Gregory would not have the belt nor would Mr. Sakaguchi have a job as his manager. Mr. Sakaguchi thought that rumours of Miyata's harsh weight control appeared to be true, and he won't have much strength in the ring, but his counters seemed quite excellent. He told Gregory that he should focus on that and teach him a lesson during the second half.

The next day, Mr. Sakaguchi and Gregory arrived to the Kōrakuen Hall for the OPBF featherweight title defence against Miyata. At the start of the match, Mr. Sakaguchi noted that Miyata's colour looked better, but he believed that Miyata could not have replenished all of his strength in a single day. After the first round, Gregory mentioned he couldn't see the Cross Counter coming that sent him down, but Mr. Sakaguchi told him not to talk and to rest. Gregory claimed that he was caught off guard because Miyata was faster than he thought, but now knows that he will come for the bait again and fall. Mr. Sakaguchi added the instant he paints the cross again, it would become a cross of blood raining down on him. After the second round, Mr. Sakaguchi was surprised that Miyata was able to fight back in the condition he was in, wondering if it was that "Japanese warrior spirit" he heard of. Mr. Sakaguchi began making comments about Miyata that made Gregory tell him to stop making light of the match, threatening the end of his paycheck. Gregory planned to give Miyata an honourable burial at full strength and told Mr. Sakaguchi to shut up and watch.

After the third round, Mr. Sakaguchi told Gregory that he had many chances to finish him, and he believed that if he didn't soon, Gregory's commercial value would decrease and his performance would hurt his matchmaking credibility also. Mr. Sakaguchi was then dismissed by Gregory, not wanting to return to a corner that does not understand his boxer's feelings. Mr. Sakaguchi argued that they were under a contract, however, Gregory told him to leave after thanking him for bringing him a wonderful opponent. In the fourth round, Gregory was defeated by Miyata, leaving Mr. Sakaguchi angered and leaving the hall alone. Mr. Sakaguchi then began to hold a grudge against Miyata.

While in Thailand, Mr. Sakaguchi entered Medgoen Dachboy's house, where he saw that without help, Medgoen's daughter would die. Mr. Sakaguchi used the situation to his advantage of studying and taking revenge on Miyata by offering Medgoen the money required for his daughter to seek medical treatment in exchange of him lasting against OPBF featherweight champion Miyata for ten rounds, not caring if Medgoen wins or not. Medgoen agreed on the deal.

When it was time for the match, Mr. Sakaguchi and Medgoen arrived to the ring inside the Yokohama Arena in Japan. During Medgoen's match with Miyata, Mr. Sakaguchi saw that Miyata improved his speed and abilities since his match against Gregory, realising Medgoen won't be strong enough. After Medgoen was defeated and wasn't moving, Mr. Sakaguchi didn't care about what happened to him, as he was able to see Miyata's greatest flaw during the match.

Mr. Sakaguchi and Randy arrived to the Kōrakuen Hall to watch Miyata's fifth OPBF featherweight title defence match against Che Jounbong. After watching Miyata win by knockout in the fourth round, Mr. Sakaguchi waited outside the venue while Randy went to greet Miyata. When Randy came out from the venue, Mr. Sakaguchi was informed that Miyata turned him down. Mr. Sakaguchi reassured him that their match will still happen despite that, and, after learning that Miyata's fists are broken, he knew how to arrange their match now.

Mr. Sakaguchi went to the Kōrakuen Hall to watch Miyata's match against Donnie Sultan. After watching Miyata defeat Sultan with the Corkscrew Counter in the first round, he approached Makunouchi Ippo and Itagaki Manabu outside the venue. He tried to get Ippo to sign a contract, but Ippo turned him down. Mr. Sakaguchi asked Ippo if he wanted the shortest path to a world title match, with the condition being that he has to defeat his boxer, the OPBF featherweight interim champion, Randy. Ippo told him that he has nothing to discuss with him since he believed that when Randy fights Miyata, Miyata will win. Mr. Sakaguchi was amused by what Ippo said, and told him to look up Miyata and Randy's history and he will learn that Miyata has no chance of winning. Mr. Sakaguchi claimed to have saw it, and it only made him more confident, as counters will be useless in the match because history has already proven that.

Mr. Sakaguchi went to the Otowa gym with Randy for his public spar. After Randy defeated three boxers, Mr. Sakaguchi was disappointed to hear that there are no more boxers to fight, remarking that he should have gone to Mexico instead. After asking for someone to call other gyms for boxers who uses their feet to spar with Randy, Itagaki and Ippo arrived. As Itagaki wanted to spar against Randy, Mr. Sakaguchi was Randy's second as the spar between Randy and Itagaki began. After Randy defeated Itagaki in the second round, Mr. Sakaguchi laughed at and mocked everyone applauding Itagaki and thinking that Randy was forced to fight seriously, claiming that he wasn't fighting seriously and that they will see that happen when he takes the world champion, Ricardo Martinez down. Ippo wanted to spar against Randy for the one round that remained off of Itagaki's spar, which Randy accepted. However, when they got to the ring and the gong sounded, Mr. Sakaguchi got in-between them and stopped the spar from beginning, since he previously offered Ippo to fight Randy before and he declined, so he is declining Ippo from fighting against Randy this time. He walked away with Randy, telling Ippo that Randy will only think about fighting him if Ippo puts his world ranking on the line and if it is in the Philippines. Outside the gym, Mr. Sakaguchi informed Randy to remember Ippo's name, as Miyata and him are the world rankers he has to take for the shortest path to become the world champion. When Mr. Sakaguchi told him that Miyata is first since he keeps defeating his pawns, Randy confronted him, claiming that he is not his tool and that he will only believe in his goals as long as it aligns with his own, planning to only work with him until he receives his present.

When the weigh-in arrived between Randy and Miyata, Mr. Sakaguchi went with Randy to the Kōrakuen Hall to attend the weigh-in. Mr. Sakaguchi and Randy went to their joint press conference with Takamura Mamoru and Ronald Duck. Mr. Sakaguchi took most of the his and Takamura's time mocking the Japanese for being bad about weight management, using Miyata and Takamura's poor looking state at the weigh-in as examples, and telling the crowd to remember Randy's name, as he will become world champion one day. The next day, Mr. Sakaguchi went with Randy to the Yokohama Arena to be his chief second in his match against Randy. Before heading to the ring, Mr. Sakaguchi attempted to make Randy want to avenge his father's death by defeating Miyata, telling him that the injuries his father received after fighting Miyata's father was the reason he passed away, however, Randy was unfazed. As the match began, Mr. Sakaguchi advised Randy to start off by getting used to Miyata's speed. After the first round, Mr. Sakaguchi complained about Randy taking counters and told him to aim for Miyata's body, as his weight management is harsh, making it possible for him to run out of stamina later. After the third round, Mr. Sakaguchi was horrified by the bruises that look like cuts on Randy, and scolded Randy for not using the data he got from his sacrificed cannon fodder, as he already explained Miyata's weakness to him. After the fourth round, Mr. Sakaguchi wondered if Miyata's side is damaged. When Randy claimed that it might already be broken, he told Randy that it should give him confidence to win.

After the fifth round, Mr. Sakaguchi deemed Miyata and his father pitiful existences to Randy, noting to Randy that it will only take one more down to make him win. After the sixth round, as Randy claimed that Miyata might die if it continues, Mr. Sakaguchi told him to not have sympathy, since the one who caused his father's death is Miyata's second, advising him to use the same counter as his father did to end Miyata's father's career. The match ended in Randy's defeat by knockout in the seventh round. When they went back to their room, Mr. Sakaguchi complained to Randy, wanting an answer as to why he lost by a counter from a weakened Miyata. He left after informing Randy that their contract has been cancelled. When he went to the bathroom, he decided that he is done with Miyata and Japan. After leaving the bathroom, he thought of going to the United States of America next before getting sent flying after getting accidentally hit by Takamura, who was in a fit of rage. He later reported the incident and it was put on a newspaper.

Mr. Sakaguchi is a short elderly man with dark skin. He typically has a white moustache and white bushy hair and eye brows. He is typically seen wearing a business suit.

He is strongly interested in money. It was mentioned he could have took Randy Boy Junior to Mexico to spar with other boxer,s but in order to save money, he took him to Japan instead. He tried to get Ippo to sign a contract with him, but Ippo refused. 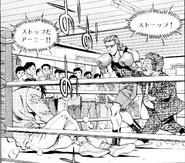 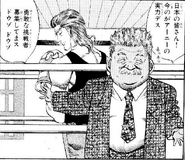 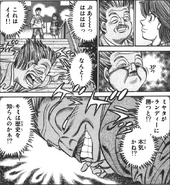 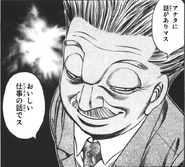 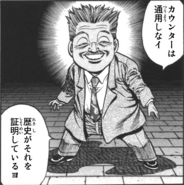 Retrieved from "https://ippo.fandom.com/wiki/Mr._Sakaguchi?oldid=79973"
Community content is available under CC-BY-SA unless otherwise noted.