Yūsuke Oda (小田裕介, Oda Yūsuke) is a semi-recurring character in Hajime no Ippo.

He was a featherweight boxer from the Nishikawa Boxing Gym before retiring after his match against Makunouchi Ippo. He then became a trainer at the same gym, helping out his former coach and new boxers.

His surname is Oda. In Japan, surnames are listed before given names.

Oda became a boxer around the same time as Kimura Tatsuya[1] and Kojima Hisato. He won his pro debut as a junior lightweight with only one punch from his right, knocking his opponent out and winning his coach's praise.[2] Sometime later, he moved to the featherweight class.[3]

When his next match was against Makunouchi Ippo, Oda believed it would be easy, as his opponent was just starting. Even though he was told not to, he met with Mikami Reiko at the Riky's. She became worried about Oda's weight control, however Oda believed he would not lose. Mikami, his coach, caught him with his daughter and made a scene. He warned Oda about Ippo and took Reiko away from him until he changed his attitude.

At the weigh-in before the bout, he surprised everyone when he displayed the body he has acquired with his recent training. Before leaving, Ippo attempted to greet Oda, but the latter angrily ignored him, as he thought he was being made fun of.

The day of the match arrived and when the bell rung, Oda had a disadvantage from the beginning, but an accidental cut gave him the upper-hand. Taking advantage of the situation, Oda aimed for the cut on his opponents forehead but was ultimately defeated by a series of quick jabs. Even though he lost, due to the return of his old love for boxing he was able keep both Reiko's love and the trust of coach Mikami, who told him they would win next time.

Prior to Ippo's match against Kojima Hisato, in order to find out about Ippo's first match against someone from a higher weight class, Iimura Mari headed to the Nishikawa Boxing Gym to find information about Oda.

Mikami mentions to Mari that Oda retired after fighting Ippo, where he wasn't able to get back into the ring again because of his "condition". When Mari asked about Oda's condition, only to find out that Oda ended up putting on a lot of weight.

During the interview, Oda told Mari that after he retired, he became a trainer since he felt motivated after his match with Ippo. However, when he thought it over, he realised he didn't have what it takes to compete with monsters like Ippo. When he realised that, it felt like a great relief lifted off of his shoulders. Once he didn't have to worry about his weight control anymore, he started eating more and more. Oda mentioned to Mari that he knew Kojima pretty well, since they debuted around the same time and ended up sparring a lot, and he continued to explain some of Kojima's past.

Date Boxing Gym was holding a sparring tournament for Boxers that had yet take the Pro Test where Oda took his boxers to take part. When Ippo arrived with Itagaki Manabu, Kintarō Kaneda and Aoki Taihei, Ippo introduced them to Okita Keigo, Kobashi Kenta, but had trouble with Oda until he mentioned he was Ippo's debut opponent. Okita told him that it was natural Ippo wouldn't recognize him since his appearance changed a lot. After Ippo's boxers were knocked out by their boxers, they weren't able to defeat Ippo as a Pro Boxer. Later, Fujii Minoru arrived with news that Sendō Takeshi was able to down Ricardo Martinez while in Mexico. They discussed the news between themselves, when Fuji added that Sendo had a match with Alfredo Gonzales in three months, where the winner challenges Martinez. Okita, Oda, and Kobashi were impressed by Sendo, and thought he was unstoppable.

Ippo mentioned when he first met Sendo, where he wasn't surprised by it since he forced their match to happen in the All Japan Rookie King Tournament after he broke his fist against Mashiba Ryō. He added people get swept by his energy and spurred into action. Fuji wanted to hear Date Eiji's thought on Sendo vs Martinez match, but Date told him that Sendo had to get by Alfredo first. Okita thought in terms of technique, Alfredo had the edge but in terms of strength Sendo was a cut above him. Kobashi thought if Send can land a hit, he thought Sendo could win. Oda thought it was Sendo's strength before and after the weigh in with weight control, when Okita thought Oda could use some weight control. Ippo thought it would be a great match, and hoped Sendo send would have his match with Martinez when Date Yūji confronted Ippo about Sendo stealing his chance at Martinez. As Yuji was leaving for roadwork, he wondered when Ippo would be ready as Date yelled at him for it and apologised to Ippo for it. Oda decided to asked Ippo if he could still fight or not. He thought with Ippo's strength it was a waste not to fight, since Ippo was his generation's role model and Ippo not fighting was giving them a bad name. Okita told Oda to stop. Kobashi added if Ippo made up his mind, it no one else place to object to it. Okita told him since they all retired they should relate. After Ippo left with his boxers, Kobashi asked Date what it took for him to get back into boxing. Date explained that it was not thoughts, but fire to put yourself back into the ring.

Before retiring, Oda had a well-built body, after retiring, he gained weight and is now overweight. Oda has dark brown hair that is slicked back, slightly large eyebrows, his nose is medium-sized and pointed, and his eye colour is dark grey.

Before retiring, Oda was a brash, somewhat lazy individual who hated to train and enjoyed going on dates. When his love interest told him that she was embarrassed by his lazy attitude, he soon started to work much harder. However, Oda soon realised that boxing was not for him and subsequently gained a large amount of weight after quitting the sport. Despite this, he was visibly far happier than previously seen, the weight of boxing being lifted from his shoulders.

Oda is a hard puncher and boasts a powerful right straight, that even when his trainer, Mikami first saw Oda put it on display during his debut, he thought that a world title might not be just a dream any more.

In spite of Oda's potential, it was ultimately wasted due to his lazy behaviour and reluctance to train, preferring to spend time loafing around, or dating his trainer's daughter Reiko. The result of this was poor conditioning and Oda lost two of his six bouts due to his lack of stamina. 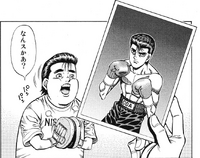 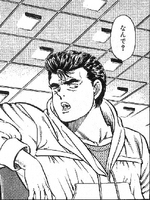 Oda's First appearance in the story

Oda at weigh in

Oda mad
Add a photo to this gallery 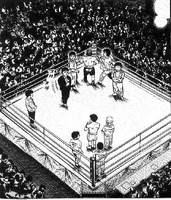 Ippo vs Oda about to start 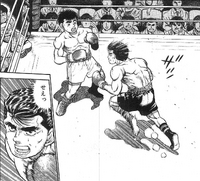 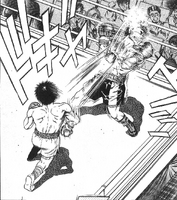 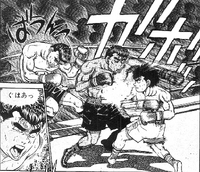 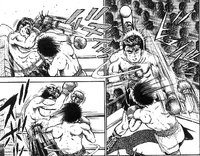 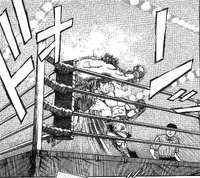 Oda trapped in the corner 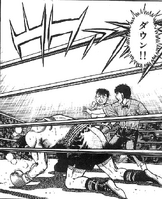 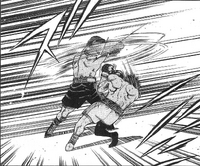 Ippo bleeding from a cut 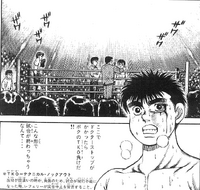 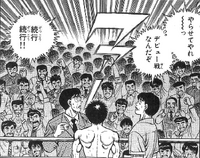 Crowd want the fight to continue

Oda going after cut to win 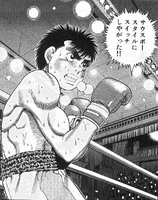 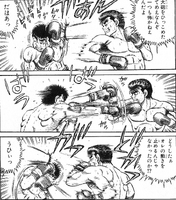 Ippo having a hard time as a southpaw 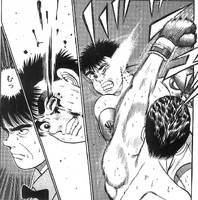 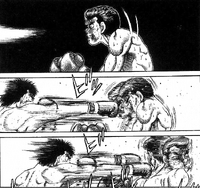 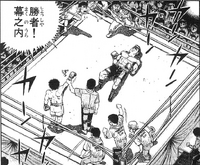 Ippo wins match
Add a photo to this gallery 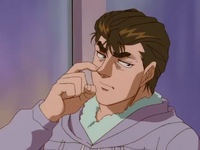 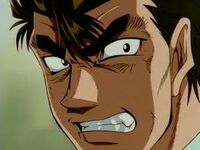 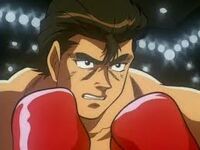 Oda in the ring.

In the manga.
P.txt.jpg
Oda after retiring.
Add a photo to this gallery

Retrieved from "https://ippo.fandom.com/wiki/Oda_Y%C5%ABsuke?oldid=71378"
Community content is available under CC-BY-SA unless otherwise noted.