Osaka (大阪市) is a designated city in the Kansai region of Japan. It is a semi-recurring location in Hajime no Ippo.

Osaka is the capital city of Osaka Prefecture and the largest component of the Keihanshin Metropolitan Area, the second largest metropolitan area in Japan and among the largest in the world with more than 20 million inhabitants.

Osaka has appeared several times in the story, since it the home of Makunouchi Ippo's rival in Sendō Takeshi, and it is where the West Japan Rookie King Tournament, All Japan Rookie King Tournament Finals, and other matches have taken place in Osaka Prefectural Gymnasium. The The Naniwa Tiger Side Story takes place prior to the start of the story.

During Sendō Takeshi training and Takamura Mamoru's travels, there are various real place shown in the background like Tsūtenkaku and Dōtonbori. When Milo Scamaras first toured in Japan, Osaka Castle can be seen. During the Naniwa Tiger Side Story, Sendo's Middle School was shown.

Locations Based From Real Life 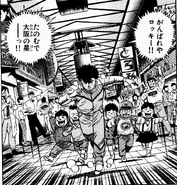 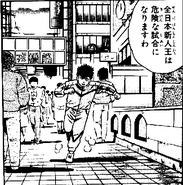 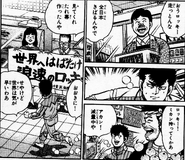 Sendo getting cheered on 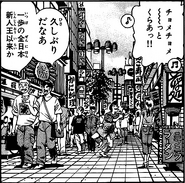 Restaurant Sendo, Ippo, and Itagaki went to after match
Add a photo to this gallery

Other Regions in Japan

Retrieved from "https://ippo.fandom.com/wiki/Osaka?oldid=70338"
Community content is available under CC-BY-SA unless otherwise noted.