Otowa Coach (音羽会長, Otowa Kaichō) is a non-recurring character in Hajime no Ippo.

He is the owner, and head coach of Otowa Boxing Gym, in Tokyo, Japan. He tends to recruit highly regarded boxers with a lot of potential to be champion-like in Hayami Ryūichi, Alexander Volg Zangief, and Imai Kyōsuke.

He was Hayami Ryūichi's cornerman during his match against Makunouchi Ippo in the East Japan Rookie King Tournament semifinal match. Prior to the match, he warned Hayami about Ippo's power being number one in the tournament. He respected that Ippo had a strong punch, but if he can't hit him, then it would not be number one or two. Later in the match, the coach was surprised when Ippo landed a counter on Hayami when he threw the uppercut. He realised that Ippo must have been aiming for it. When he saw that Hayami was in trouble, he wanted Hayami to get away from the ropes, since Ippo's hits were strong in order to keep some distance. The coach wanted Hayami to use his rapid punches to keep Ippo away instead trading hits, but Hayami wasn't able to as Ippo landed an uppercut, ending the match with a one round knockout.

The coach was shocked that Hayami lost, despite the skill level being in his favour. He hoped Hayami used this loss as turning point and keep going. Hayami told him not to sweat it since Muhammad Ali and Sugar Ray Leonard lost on their road to greatness. Otowa thought those weren't the lines from someone who just lost.

When Hayami fought against Kobashi Kenta for the JBC junior featherweight title, he was one of Hayami's cornermen. At the end of the seventh round, he told Hayami that he had the upper hand in terms of speed, but not to underestimate Kobashi since he never stopped his attack. He wanted Hayami to keep pushing forward. After hearing Hayami not wanting to underestimate his opponent, the coach realised that Hayami had grown. After Hayami went down after a hit to the jaw, the coach threw in the towel, recalling how Hayami gained a glass jaw after his fight with Ippo, but Hayami decided to continue boxing despite the injury.

He went to the Kamogawa Boxing Gym with Imai Kyōsuke in order for Imai to spar with Ippo. He was against the spar with Ippo since his gym previously sent Hayami and Volg against Ippo and lost, but Imai wouldn't listen and wanted to fight him. Ippo and Imai then sparred, which lasted the whole three rounds with Imai not going down once. The coach was happy with the results, praising Imai.

The coach and Imai headed to Kamogawa Boxing Gym once again for another spar with Ippo to help Imai prepare for the All Japan Rookie King Tournament. Ippo had a hard time with Imai in the spar, where he lost the clean exchange between them. Ippo seemed surprised that Imai's only had 4 professional fights, and by Imai's power. Imai landed a strong punch that caused Ippo to almost fall. The spar ended, and Ippo had a tough time. The Coach was impressed with it, and thought Ippo would have fallen if they used 8 ounce gloves, but Imai wasn't certain.

He was at Imai Kyōsuke match against Terai Makoto in the East Japan Rookie King Tournament Semi final match. He watche as Makoto was able to dodge Imai's punches early on, but Imai managed to land a body blow on him, where Terai was shocked by the power of it. After taking it, he shown signs of falling. Imai continued to go after his body, and Terai was KD. The ref stopped the fight and Imai was declared the winner.

He has black hair, and he tends to always wear sunglasses when ever he appears. 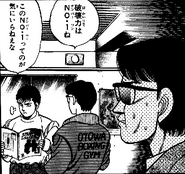 Arriving with Imai for Spar 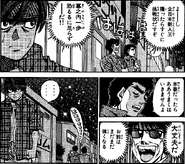 Boasting that Imai could have downed Ippo

Telling Imai not to spar with Alfredo 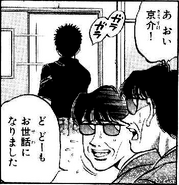 Returning for another spar with Ippo

Prior to Imai's Semi Final Match
Add a photo to this gallery
Retrieved from "https://ippo.fandom.com/wiki/Otowa_Coach?oldid=72211"
Community content is available under CC-BY-SA unless otherwise noted.