Hachi and his kids

Pension Yoshio (ペンション義男) is a recurring place in Hajime no Ippo.

It is a place managed by Nekota Ginpachi, where he resides with his dog; Hachi. It is located in the mountains of the Joetsu region, around the Niigata Prefecture. The pension served as a training location for both Takamura Mamoru's and Makunouchi Ippo's title matches.

The Kamogawa crew left for a training camp in the mountains. After arriving, they met Nekota; an old friend of Kamogawa's, at whose house they will be staying during training. While Takamura hit the sandbag with Nekota and Kamogawa, Shinoda Tomoyuki took the remaining trio to run around the mountain. While jogging, they encountered a bear, but since they were going downhill, the animal was too afraid to follow them, and allowed them to escape.

The next day, the group went jogging once again, but this time Nekota gave them a few bells to wear in order to keep the bear away. Takamura refused the bell as he thinks he could defeat the animal. While they were making their way back to Pension Yoshio, Takamura was annoyed by the sound of the bells, but the trio tells him that it was an effective system to drive The Bear away. Despite this, Ippo is seemingly attacked by a creature, causing Aoki and Kimura to run away and leave him behind. As Nekota prepared to kill the bear and save Ippo, it was revealed that the animal was actually non other than Nekota's dog; Hachi.

Kamogawa then assigned different exercises for the boxers, with Takamura running while carrying Yagi Haruhiko, Aoki Masaru and Kimura Tatsuya doing squats in the river supervised by Shinoda, and Ippo cutting wood with a hatchet. After failed attempts to cut the wood, Ippo asked for Nekota's help. Nekota demonstrated a few times his perfect method, and reveals the back-muscles he has gained thanks to that exercise. Ippo realized that gaining strength to make Sendou back up, was the reason for which he was assigned the wood-cutting task. Nekota also mentioned that engaging Sendou in an exchange could lead to irreversible injuries, he also reveals that he suffers from punch drunk syndrome himself.

After the warning, and realizing Ippo had no intention to run away from Sendou, Nekota told him that there is a way to punch without punching. After cutting the wood, Ippo and his gym mates skeptically listen to Nekota and Kamogawa's method of punching without punching. At first it appears to be nothing but normal faints, but after taking a look at some old pictures of the young Nekota and Kamogawa (which greatly surprises the group), they tell the story behind the technique. Later Takamura shows it in a spar with Ippo.

On the final day of the training camp, all boxers are completely exhausted, with the exception of Takamura, who claims to have risen to perfection and being capable of defeating a bear. He states there is no longer a human who can defeat him and that he will bring bear meat for the night. Later on, Takamura runs into the bear, and KO'ed. Takamura arrived and told them he defeated the bear, but they do not believe him as the only witness of his match against the bear can not speak. Nekota served the dinner for the group. He revealed it was a bear he shot earlier that day, which Takamura realized is the same bear he had spared. Upset because of the bear's death, Takamura ate it as a sign of respect.

The next day, the gym members get ready to depart and say goodbye to Nekota after promising they will return. Nekota followed the moving car in what appears to be an attempt to give advice, but keeps running even after saying it. The annoyed boxers throws objects at him, telling him to go back and rest before he gets injured. Nekota then trips on a rock and falls to the ground, but tells Hachi not to worry because he is fine. He confesses feeling grateful for the visit and looks forward to seeing them again. 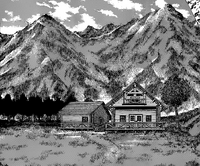 Pension Yoshio in the manga.
Add a photo to this gallery

Photos of Kamogawa, Nekota, and Yuki on the wall at the house.
Add a photo to this gallery

Retrieved from "https://ippo.fandom.com/wiki/Pension_Yoshio?oldid=70638"
Community content is available under CC-BY-SA unless otherwise noted.