He is a featherweight professional boxer and was ranked third in the Thailand rankings before fighting Makunouchi Ippo. He fought Ippo in his first comeback match, where Ippo debuted the Dempsey Roll.

At some point in his boxing career, Ponchai fought against Jimmy Sisphar and won.[4]

Ponchai travelled from Thailand to Japan to fight Japanese boxer Makunouchi Ippo. Later, Ponchai met Ippo during the weigh-in session. When the day of the match arrived and both boxers entered the ring, the match began. When Ippo went to touch gloves at the start of the match, Ponchai pushed it away and started to attack which caught Ippo off guard as he blocked the surprise attack.

Ponchai then launched many attacks on Ippo's guard until Ippo dodged two big punches by weaving. Ponchai then blocked a one-two which still caused him to be pushed back. Ippo continued to attack and was able to land a few punches through his guard. Ponchai attempted to escape while Ippo began weaving his body to apply more pressure making Ponchai trapped into going toward the ropes. Ippo landed an uppercut that broke Ponchai's guard, which he then follows with a right. However, Ponchai spins his neck with the punch, negating the damage. Ponchai pushed Ippo back to the centre on the ring while Ippo dodged Ponchai's attacks. As Ippo stopped moving back, both boxers threw punches that miss in close range, Ippo saw an opening for a liver blow and hit Ponchai in the liver. With Ponchai's face uncovered, Ippo hit him with a right uppercut. Ponchai immediately recovered and threw a right, barely grazing Ippo.

In the second round, when Ippo threw a left, Ponchai threw a right in an attempt to use a right Cross Counter, but Ippo dodged it. Ippo began weaving his body as Ponchai attempted to land a clean hit. Ippo eventually got into the back and forth motion of a side way figure eight, throwing punches from side to side, successfully hitting Ponchai until he went down. The referee then saw Ponchai unable to continue and ended the match, with Ponchai losing the match.

He is an aggressive boxer that attacks right from the start. He has a strong body and punch, and based on his record quite a bit of stamina. He shows signs of infighting against Ippo, and being able to out-box.

He is a boxer with a classic style reinforced by a good musculature. He uses footwork as well as in fights. 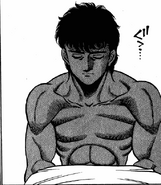 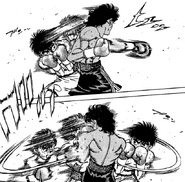 Ippo lands a strong punch.
Add a photo to this gallery

Retrieved from "https://ippo.fandom.com/wiki/Ponchai_Chuwatana?oldid=73775"
Community content is available under CC-BY-SA unless otherwise noted.