The Post-Towards a Resolution Arc (Temporary Name) is the forty-fourth story arc in the series and the fourth in the Bold Retirement Saga.

After declaring that he would go to Mexico to Makunouchi Ippo, Sendō Takeshi finally goes to Mexico in order to find Alfredo Gonzales who has been ignoring his match requests. Upon arrival, Sendō and Hoshi Hiroyuki met the Marascas Brothers, with Milo taking Sendō to the J.C. Gym where Sendō encountered the WBA featherweight champion Ricardo Martinez. After a sparring session which ended with Ricardo's first down in his career, Alfredo, who witnessed the scene, became eager to fight Sendō. Sendō and Alfredo agreed to fight each other as a semifinal to Ricardo's upcoming title defence in Mexico, with the winner earning the right to challenge Ricardo. The news hit all around Japan. Before the match, Aoki Masaru, Kimura Tatsuya, and Itagaki Manabu have matches.

Ippo continues training Taihei and Kintarō, training them by doing 800m dashes as if they were six-rounders even though they are debuting as four-rounders. As Aoki, Kimura, and Itagaki overlook Ippo training his students, Aoki claims that his younger brother's stamina has grown as much as his hair. Kimura notes how Aoki is worried about Taihei boxing due to the injuries that come with it, however, Aoki claims he can entrust it to Ippo with it comes to injuries. They then become curious as to why Ippo keeps calling out "1" to his students. They ask Ippo at the gym, which Ippo in turn shows them a notepad with numbers assigned to basic punches. Shinoda sees it and reveals that it is a Numbering System which requires an unshakeable teacher-student bond for a quicker reaction time and faster combinations. Aoki and Kimura tests it to confirm the faster reaction time due to it being quicker to call out a number rather than the whole name of the technique.

Aoki, Kimura, Itagaki, Taihei, and Kintarō then enter the gym's ring for Ippo to test them to see if they can respond to his number calls in time. During the session, Ippo only called out "1", which is the left jab, making them angry and ask for a different number. Ippo then pictures a scenario where he goes against Sendō, however, he ends up calling out "1" again, making the others quit. Taihei and Kintarō then remembers that they were invited to Takamura celebration party after he won against Michael Goat, wanting to know when it is supposed to happen. Shinoda informs them that Takamura has left for a trip, which Kimura believes since he already went all over Japan, he may go overseas. When Ippo overhears the conversation, he recalls when Sendō claimed he would go to Mexico.

At the Sendō Shop in Osaka, Sendō's teacher visits Sendō's grandmother since she moved nearby recently to work at a cram school. Sendō's grandmother misinterpret's the teacher's visit to her deciding to become Sendō's wife until Sendō explains that she arrived to simply check on her everyday, as Sendō realises that his grandmother wants him to be with his teacher one day. With Sendō planning on going to Mexico, Hoshi Hiroyuki arrives with a group of people to act as body guards while Sendō is away. However, after the teacher expresses that she feels as if she wouldn't be needed since they would be guarding the shop, Sendō sends the group home. Sendō then gets ready to leave for Mexico while the teacher becomes worried about how unprepared Sendō is. Sendō and Hoshi, who believes that his English speaking capabilities will help them communicate in the Spanish speaking Mexico, leaves for Mexico by plane. They then arrive a day later.

At the Kamogawa gym, Ippo learns from Mari about Sendō going to Mexico and that he left without notifying the Naniwa Boxing Club, which Ippo assumes that he went there to meet with Alfredo Gonzales. Mari then reveals that Alfredo should have had a chance to fight Ricardo after he defeated Ippo, however, Ricardo felt no need to fight a boxer he defeated twice, turning down the challenge and making Alfredo feel cheated, not wanting to fight another Japanese boxer again. Mari further explains that Sendō wanted a match against Alfredo, as he is the man who defeated Ippo, however, due to Alfredo's new grudge against the Japanese boxers, he turned down Sendō's requests.

In Mexico, Sendō and Hoshi were guided to the pro wresting gym, Lucha Lucha Gym, where they meet the popular Milo Scamaras and Marascas Scamaras brothers. Milo takes Sendō and Hoshi to the J.C. Gym where he feels Sendō might find the boxer he is looking for. Upon arrival to the gym, Sendō becomes fired up when he sees WBA featherweight super champion Ricardo in the ring sparring. 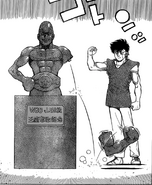 Sendo breaking Takamura's statue
Add a photo to this gallery

Newspaper with Sendo, Hoshi and the Marascas Brothers 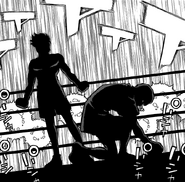 Martinez's first down
Add a photo to this gallery

Retrieved from "https://ippo.fandom.com/wiki/Post-Towards_a_Resolution_Arc?oldid=71770"
Community content is available under CC-BY-SA unless otherwise noted.