He is a featherweight professional boxer from the Philippines and the son of Raccoon Boy, the man who defeated Miyata's father and ended both their careers prematurely. Like Miyata Ichirō, he has the exact same style as his father and as such their match was considered fate.

He was the main antagonist for Miyata Ichirō in the Survival Match of Asian Champions Saga.

Randy is currently the strongest Filipino character so far in the series.

Randy Boy Junior is a Featherweight professional boxer and the son of Raccoon Boy, the man who defeated Miyata's father and ended both their careers prematurely. Like Miyata Ichirō, he has the same style as his father.

He holds a victory over the former Filipino Featherweight Champion and fellow countryman, Malcolm Gedo, who shattered his dreams of reaching the world stage from being defeated.

Randy attended Miyata Ichirō's match OPBF title defence against Che Jounbong with Mr. Sakaguchi. He watched Miyata struggled in it after he became distracted after spotting him in the crowd, and break his fists but still able to pull threw. Randy went to Miyata's locker room to meet Miyata after the match. As Miyata left the waiting room and met Randy Boy Junior out in the hall. Randy Boy Junior told Miyata, "We were destined to meet..." 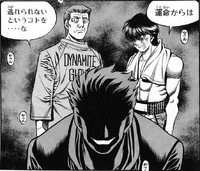 Miyata asked (in English) who Randy Boy Jr was, but he didn't answer. Instead he thrown a punch toward Miyata but missed, and told him that "Did I not say this was a fated meeting? And no one can fight against fate. You and I were meant to fight!" Miyata Senior came out and wondered what was going on, and Randy Boy Junior started to leave, and mentioned, "A father-son team, is it..? So it is fated after all. Do not forget, Ichiro Miyata, you cannot escape from your destiny." Miyata still didn't know who he was, but he realized he is not the typical cannon fodder.

RBJ met Mr. Sakaguchi outside and mentioned Miyata turned him down, but Mr. Sakaguchi told him not to worry, he will get that match for him. RBJ mentioned if Miyata's fists weren't broken, he wondered what would have happened. After he heard that Mr. Sakaguchi know how to arranged heir match now.

After defeating all the boxers at Otowa Boxing Gym, Randy Boy Junior was having a hard time finding training partners. Mr. Sakaguchi mentioned that they should have gone to Mexico instead of training in Japan. When Mari asked why he didn't, Otowa Coach told them it was because he was too cheap. Mr. Sakaguchi wondered if there were any other gyms they could call, that had a fast fighter (to prepare for Miyata, and to show off.) Otowa Coach doesn't think so when they heard about Randy Boy Junior destroying boxers. In order to find someone to eat his words, they begaa to think of potential opponents for him. Mari thought of Itagaki. After he heard about it, Itagaki wanted to fight, but Yagi and Shinoda don't know if it would be a good idea since the Coach Kamogawa was gone, and Randy Boy Junior had destroyed a few boxers already. Itagaki mentioned since he wasn't able to spar with Ippo, he wanted to find someone strong. Itagaki, Shinoda, Yagi, and Ippo headed over there to spar.

Randy was aiming to defeat Ricardo Martinez to become World Champion. It is revealed before his fight with Ichiro Miyata that his father died after his world title bout. He suspects it was because he sustained brain damage after the fight with Miyata's father.

Randy was beaten by Miyata after what was undoubtedly Miyata's most intense fight up until that point. This angered his manager, Mr. Sakaguchi, into nullifying their contract. Without even paying attention to his manager, Randy accepted the outcome of his fate against Miyata and then decided together with his team to go home back to the Philippines.

Randy is a tall man with tan colored skin, a short neatly trimmed mustache on his upper lips and spiky, long black hair. He is well built with a strong and muscular body. He has intimidating, sharp eyes and thick eyebrows. Usually, his eyes are very narrow, appearing to be almost closed. However, when he was forced to fight seriously in the match against Miyata, his eyes were wide open, giving him an almost demonic look.

Randy is an arrogant boxer who considers himself much better than his opponents. He is also shown to be quite level-headed, not holding a grudge over Miyata's father killing his own. But when he is losing in a fight, he can become extremely furious in contrast to his normal demeanor. He becomes even more dangerous, with his normal aloof face changing into one of pure rage.

Randy Boy Jr. is a strong and ambidextrous boxer, just like his father, which enables him to be a "Switch Hitter": a boxer who is capable of freely switching stance from orthodox to southpaw and vice versa. His style has given him the ring name "Asura" because of his ability to "go" and "see" anywhere in the ring. His switching is said to be the perfect match-up against counter-punchers, and out-boxers in general, because it disrupts their rhythm and timing. This was shown in his past fights and his spar with Itagaki Manabu (who had already awakened his latent potential). He has power and endurance supposedly on par with Makunouchi Ippo, and is also surprisingly fast. Randy is also good at using head slips and parrying punches.

His usual pattern is to allow his opponent to get into rhythm (though this means he may have to take some hits) then disrupt it by switching stances. Using this, he eventually catches them. If he traps his opponents in the corner, he will face them directly with his hands up on both sides of his face. From there he switches between orthodox and southpaw depending on where his opponents move.

Randy tends to take a lot of hits despite his speed and endurance. His signature strategy may not be as effective against in-fighters like Sendo or Ippo, since the punishment he would have to take from them may be too severe to allow him to mount a counterattack. Moreover, switching stances has little effect on in-fighters.

Randy is ambidextrous, but when he becomes off-balance he instinctively throws his left. Miyata exploited this habit to land his first major counter of the match. 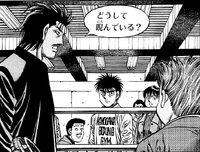 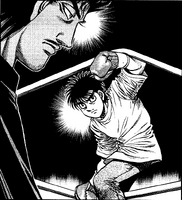 Retrieved from "https://ippo.fandom.com/wiki/Randy_Boy_Junior?oldid=73771"
Community content is available under CC-BY-SA unless otherwise noted.