He is a professional boxer from Detroit, Michigan, with the earned nickname "Motor City Bison" and the former WBA middleweight champion.

In the past, he lost to David Eagle twice during the Olympic Games and had longed for a rematch in the professional ring, which he was unable to fulfil due to David losing to someone, thus never being able to fight him again since he had retired a short time after. The challenge for a "World Title Unification Match" came up, against the WBC middleweight champion Takamura Mamoru, the one who won against David which he accepted.

Richard Bison grew up somewhere in downtown Detroit, America and as a young adult he started boxing in a way to protect himself like many others, without any initial thoughts of succeeding further than that. By time, Bison was very shocked to find out that he could beat anyone, continuing through amateur matches, it wasn't just because they were weak, it was him who had the talent. In his mind he knew he could do it, reach the top, higher and higher, until he lost for the first time to someone. Richard Bison came up against David Eagle, meeting him for the first time, who was also really talented as his aim was to win the Olympics at the time, thus Bison facing defeat for the very first time in his amateur career.

After some time had passed, he still continued with his career, trying to enter the Olympic Qualifiers at the time. Although unexpectedly, the one who stood in his way again was David Eagle and defeated Richard Bison once more, failing to qualify for the Olympic Games.

Richard Bison watched David Eagle reaching unreachable heights, succeeding in the Olympic Games, with his earned nickname "Golden Eagle" and becoming a pro. Bison felt he was left behind, dreaming for one day to reach those heights as well, perhaps facing David Eagle once more. He turned pro for that very reason, in hopes of having a rematch against David Eagle.

That sadly never happened though, as Richard Bison's dreams were shattered, his treasure was stolen, by a Japanese challenger who had won against David Eagle, making him unable to ever reach him since David Eagle had since retired a bit after, and ever since he swore vengeance against that certain challenger.

At the Press Conference, he wore a white suit, where he appears professional. He has short hair, and a trimmed beard and moustache.

Richard is a strong and powerful boxer. He is another character in the series who uses the Hitman Style, also known as the Detroit Style, an offensive fighting style that involves using Flicker Jabs. He is known to have an "Old School Hitman Style".

Richard uses his Flicker Jabs to keep both himself and opponents at middle range. He is able to dodge incoming punches thrown with sways and can effectively out-box with his Flicker Jabs. Richard's Flicker Jabs are stronger than most Flicker Jabs used in the series (due to the weight class he is in as well as his physique), evident by the fact that he managed to push back and keep Takamura at bay with just his Flicker Jab. Due to his usage and knowledge of the Hitman Style, Richard can analyse the angles as well as parry them and even counter them when another opponent uses Flicker Jabs against him.

In addition, Richard can in-fight effectively, using World-Class feints alongside good technical skill ranging from precise offensive combinations (left hook, left uppercut, right hook, left body blow into a right straight) to his defensive skills such as sways, ducking, and using Neck Spins when the situation calls for it. Furthermore, Richard is good at adjusting to his opponent's patterns and habits. An example of this occurs in his match with Takamura. Richard notices that Takamura ducks to the right and punches each time he feints with his left. He also sets up a Chopping Right, baiting Takamura into swaying by leaning back to hit him with a right straight. He also figures out that when he feints a right, he can hit Takamura with a long left hook since he's focused on the right, which almost cost Takamura the match. 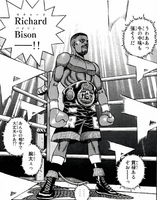 Bison in the Corner 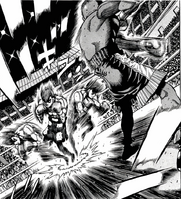 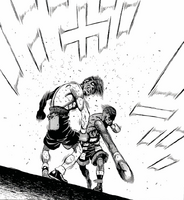 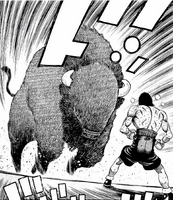 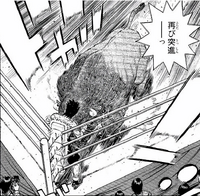 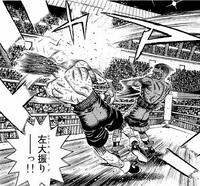 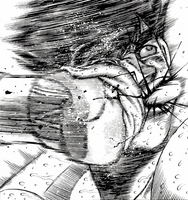 Takamura with his final blow to Richard Bison

Bison Leaving the Ring
Add a photo to this gallery

Retrieved from "https://ippo.fandom.com/wiki/Richard_Bison?oldid=71546"
Community content is available under CC-BY-SA unless otherwise noted.