Wiki Ippo
Register
Don't have an account?
Sign In
Advertisement
in: Characters, Male Characters, Characters from the Philippines,
and 6 more

Romeo had an upcoming OPBF lightweight title match against Mashiba Ryō. When the match arrived, Romeo went to the Yokohama Arena. While in the ring before the match began, Romeo was shocked to see that Mashiba already looks beat up as his coach warns him that Mashiba will most likely come at him. When the match began, Romeo prepared himself as Mashiba ran towards him. With Mashiba's first attacks being three Chopping Rights in a row, Romeo dodged the first one, blocked the second one, then countered the third one by hitting Mashiba's jaw. Mashiba stepped back and threw Flicker Jabs. Romeo deflected and dodged the Flicker Jabs while pressing forward until he got within close range. Romeo knocked Mashiba's fist away when he tried to throw a Chopping Right and threw a right, however, it hit Mashiba's block. Romeo dodged another Chopping Right and attacked Mashiba with a body blow barrage. In the fifth round, Romeo continued hitting Mashiba's body at close range after dodging a Chopping Right. Romeo saw another Chopping Right coming and prepared to dodge it, however, it turned out to be a feint, and Romeo was hit with a right uppercut to the body. Romeo was defenceless as he was hit with a combination of Chopping Rights and left uppercuts until the referee got between them and stopped the match, ending the match with Romeo's loss.

His skin tone is dark like most Filipino characters, with a round-long straight nose and upwards short hair. He has a fierce look.

He is an in-fighter, but he is quite skilled at laying traps. He was able to counter Mashiba's chopping right after getting thrown 3 times. 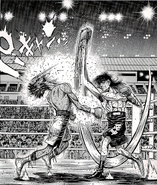 Romeo getting hit by the uppercut 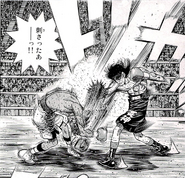