He is a Russian trainer who trained Alexander Volg Zangief since his childhood. He and Volg were affiliated with the Otowa Boxing Gym.

As a trainer, Ramuda took up many top boxers in the Soviet Union, but was not satisfied with the candidates. When he first saw Alexander Volg Zangief, he knew it was him that he was searching for, he saw his interest in boxing and the fighting spirit in him and since Volg wanted to be a great boxer, he started to train him personally in the cold weather of Russia. Eventually, grooming Volg into one of the finest and strongest fighters in boxing history, gaining many victories and no losses whatsoever, making Volg an esteemed amateur champion. Ramuda continued to train Volg as he challenged professional boxing in hopes of becoming a world champion.

When he entered his boxer, Volg to the Class A Tournament, the semifinals was against Suzuki Toshio. After being Volg's second for the match, the match ended in Volg's win.

When Volg was scheduled to fight Makunouchi Ippo for the Class A Tournament finals, he met Ippo's coach, Kamogawa Genji in a magazine interview. Ramuda praised Japanese boxers, however, he asked Kamogawa why there are a large number of broken Japanese boxers. After hearing the same answer that other Japanese trainers said, he stated how Japanese trainers push their fighters, shortening their careers until they are broken. While watching a video of Ippo, Ramuda asked Volg for his opinion of him. Hearing his boxer's thoughts, Ramuda noted of Kamogawa's old methods and having a wonderful understanding of boxing. Knowing this, Ramuda warned Volg not to be careless.

A few days before the Class A Tournament finals, Ramuda visited Volg to make a final check on the fight plan against Ippo. The next day, Ramuda had a mitt training session with Volg, who used his White Fang. When the match against Ippo began, Ramuda was Volg's second. When Volg lost the match, Ramuda believed he exchanged thousands of words to Kamogawa and bowed to him.

After Date Eiji defeated Ippo and relinquished his belt, the two boxers fighting for the title was Volg and Sendō Takeshi. When the match began, Ramuda was Volg's second for the match. The result of the match ended with Volg losing by a decision that Ramuda was claiming to be a hometown decision, wanting to see the points to no avail. The result of the match made the Otowa gym cut their contract with Volg, and Ramuda returned to Russia with Volg after the match.

In front of Volg's mother's grave, Ramuda asked Volg if he was really leaving. Volg mentioned that after he was finished settling things, he will leave. Ruslan mentioned he will look after his mother's grave, so he should fight to his heart's content, but also warned him that the list of rings available to him was limited. His title of World Amateur Champion doesn't pull much weight anymore, and it will be a tough fight. Volg told him not to worry since he will be betting on his fist in a country known for freedom, but for now he will stop by Japan to collect something he left an old friend. He felt seeing him will bring him back to how he used to be. He had no worried since he will only be looking forward, and he had nothing to leave behind and comeback to. As Volg was leaving, Ramuda thought that his mother's death wasn't why he was leaving, since he knew sooner or later that Volg would leave this place where his blood of a wolf would force him to leave.

Ramuda is an elderly man with grey hair and black eyes. He has wrinkles under his eyes and on his upper lip as well as age spots.

Ramuda is a determined trainer and believed that the main reason for Japanese boxers short career is the trainers who uses words like willpower instead of skills and they pressure their boxers to push themselves to the limit. However, after his boxer, Volg fought and lost to Ippo, he saw that willpower is important too. 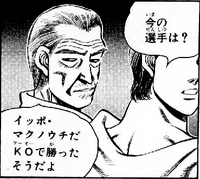 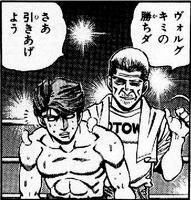 Ramuda and Volg after winning 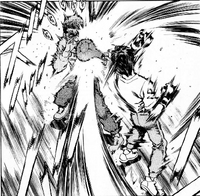 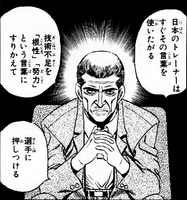 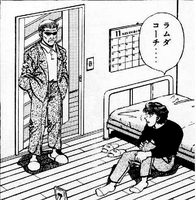 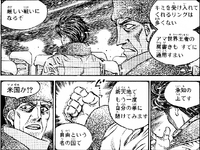 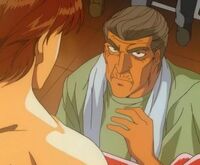 Ramuda as he gives instructions to Alexander. 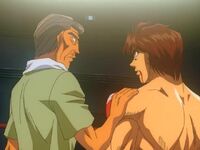 Ramuda, tells Alexander who lost himself at the moment, that he won the match. 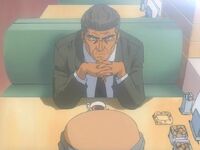 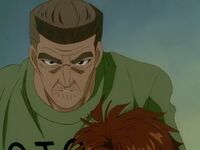 Ramuda talks about Ippo with Alexander for his upcoming match. 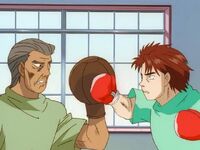 Ramuda, training Alexander for the upcoming match with Ippo. 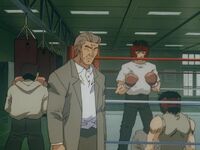 Ramuda searching for the worthy person to train. 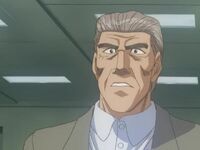 Ruslan Ramuda, as he says goodbye to Volg before he leaves.
Add a photo to this gallery

Retrieved from "https://ippo.fandom.com/wiki/Ruslan_Ramuda?oldid=70386"
Community content is available under CC-BY-SA unless otherwise noted.