His main boxing matches in the series were against Makunouchi Ippo in the Rising Saga, as the 5th and strongest challenger Ippo ever faced and about a year later with the title match against Mashiba Ryō.

His surname is Sawamura. In Japan, surnames are listed before given names.

As a child, his stepfather was an alcoholic who would regularly physically and mentally abuse Sawamura and his mother. Eventually, Sawamura stabbed his stepfather with a knife in order to protect his mother. Soon afterwards, his mother placed him in the care of the state while telling him she was looking for a job, when in reality, he was being abandoned by his own mother. He took three years to realise she abandoned him.

His isolation and bitterness was only amplified when he was falsely condemned for killing doves that he had fed. His only friends were Kawabe, who was his old teacher from middle school and Sendō Takeshi, though he treated neither as such.

A few years later, his teacher introduced him to boxing, sending him to a friend of his, who was the coach of the Nagoya Oniyaritome Boxing Gym. Sawamura became by time a natural violent professional boxer with a tendency to foul when there was reason. Meanwhile, he also became a construction worker. He preferred it over any other job because of the heights he saw, equalling the heights he would see when he becomes the national champion one day.

He eventually fights Ippo for the JBC featherweight title. He is the second challenger of Ippo's to develop a counter to the Dempsey Roll, but is the first to succeed in using it without getting hurt by Ippo in return. In the fourth round, Sawamura all but has victory in his grasp, but he postpones to win by KO Ippo and ending the match to instead cause further damage. Ippo then executes his Dempsey Roll counter counter in the following rounds and defeats Sawamura. Following his loss, Sawamura is seen to be greatly embittered in the hospital and angrily lashes out at Sendō who is consulting him nearby. However, it is not until Sendō tells Sawamura that Kawabe was bought up in the same institution as him did he finally realize he had someone who relates to his struggles of loneliness. Later, when Kawabe catches up with Sendō and asks of Sawamura, Sendō tells him that after he gets out, he's going to treat his teacher to an all you can eat.

During Takamura's travel's across Japan, he visits Nagoya, where Sawamura is seen in the background working as a construction worker.

After his loss against Ippo, he begins to realise the value of hard work, and sets Ippo as his goal, wanting to experience the same heights as Ippo. Mashiba challenges him to a title match because Sawamura had attacked his sister prior to the Ippo match. The bout begins and although both boxers appear to be equally matched, a series of fouls from Sawamura eventually turns the tides of the fight in his favour, and Mashiba eventually gets knocked down twice. Unimpressed by Mashiba's performance after the second knockdown, Sawamura brutally kicks a downed Mashiba in the head, much to the outrage from Toho and fans alike.

After Mashiba realises this revelation, the match turns into an all-out street fight, and Mashiba eventually manages to headbutt Sawamura in the eye, putting him at an extreme disadvantage by partly obstructing his vision. With Sawamura's injury, Mashiba manages to bring the fight back into equal grounds. After a brutal mudfight between the two, Sawamura eventually manages to down Mashiba again, but the latter musters up the strength to continue fighting. Before the referee signals to begin the fight, Mashiba sucker punches Sawamura and proceeds to brutalize him, leaving him in a bloody mess and causing him to free fall out of the ring. Mashiba is subsequently disqualified and Sawamura is declared the new champion.

After he wins his fight against Mashiba, he refused to accept the belt, and instead rode away without his trainer's agreement, on his motorcycle. However, due to the massive head damage he suffered during the fight, he accidentally rides straight into oncoming traffic. His injuries became irrecoverable and had to retire from active service as a professional boxer forever.

A large scar on the face is left behind in the aftereffect of a traffic accident, bolts and wires embedded by surgery have not been removed yet. He continued driving the motorcycle even after the accident and he continued being a construction worker and now a trainer.

Sawamura's sociopaths rants and behaviour are shown to have subsided. He sports a series of facial scars, as well as a calmer personality and a keen eye for boxing.He helped as a guide to Sendō who visited Nagoya on a journey of dojo, and also went to watch the OPBF Unification match with Sendō. He even reunited with Ippo, the first champion he faced in Itagaki's match and even enjoyed a long conversation with Ippo and Sendō during Miyata Ichirō's match against Randy Boy Jr. and seems to have a sense of humor, albeit a sarcastic one. He also holds Miyata's father in high regard, calling him a genius second in the fight against Randy Boy Junior, in which he never praised someone like that before.

Sawamura carries a menacing appearance. He is tall for a featherweight, with a lean but toned build and spiky, unkempt dark-coloured hair. His eyebrows are thin and slanted upward at the outsides, with eyes almost always half-closed in a look that can be interpreted as boredom or distaste. His eye colour is sometimes light brown, sometimes reddish. His nose points straight down rather than curving outward.

After Sawamura's match against Mashiba Ryō, he has visible scars on his face from his motorcycle accident.

Much like Mashiba Ryō, Sawamura is a dark, brooding boxer with a devastating fighting style and a tendency to foul. However, unlike Mashiba's openly aggressive personality, Sawamura possesses the attitude of a cold, calculating and oftentimes psychotic killer. Also unlike Mashiba, who fouls in desperation, Sawamura will often commit illegal moves simply out of pure malice, even when he has the upper hand in a fight. He is shown to be highly cruel and antagonistic and has openly expressed his bloodlust and desire to kill numerous times, all of these traits stemming from a harsh and disturbing childhood. Before and during his match with Makunouchi Ippo, he even goes into somewhat cannibalistic rants, desiring to tenderise Ippo so he could relive a childhood memory with his mother. Following the revelation from Sendō that Kawabe was bought up in similar harsh environments, he becomes somewhat humble and his psychopathic tendencies begin to lessen, developing a liking for hard work and a drive to be on the same level as Ippo. However, his cruelty and viciousness continue on, and is shown again in his match against Mashiba, which turned out to be a match full of fouls and illegality. Post-retirement however, he seems to have mellowed out. Though he remains cold and cynical, his more aggressive and vicious behaviour seems to have faded away.

First and foremost Sawamura was a gifted counter-puncher, his sense for counter-punching is even greater than Miyata's, as he has a very good eyesight. It was said that his counters may even surpass that of Miyata's in all of Japan and Takamura recognised his ability as a "undoubtedly a natural talent".

The difference between Sawamura and Miyata's counter-punching is that Sawamura hits his opponent before or after they have thrown a punch, purely to punish them, rather than during their punch, which Miyata does to use the opponent's momentum against them. As a result, Sawamura's counters have been called "dark/evil" while Miyata's are considered "light/good". Sawamura has fast and heavy jabs which are nicknamed the bullet and his most powerful shot is a Right Straight nicknamed the flash. Because of his rough childhood, Sawamura is rugged and is not above committing fouls, despite his great strength and sense for boxing.

More of a hindrance than anything else is the fact that Sawamura has a tendency to commit fouls due to his sadistic personality. In fact, his tendency to foul cost him his boxing career, as Mashiba brutalised him in retort to this behaviour, despite the former actually outclassing the latter during the match. Also because of his blood-lust, he will actually not go for a knock out punch until he feels like it which, while still a positive in terms of points, still means that the opponent has a chance to come back, as was the case when fighting Ippo.

Sawamura on his motorcycle 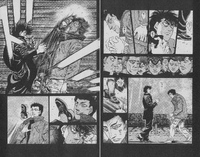 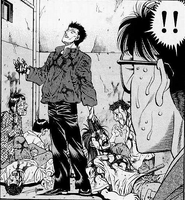 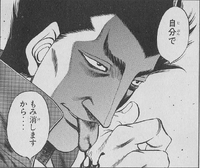 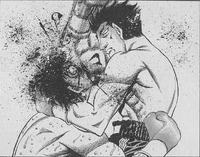 Sawamura throwing a punch at Kumi 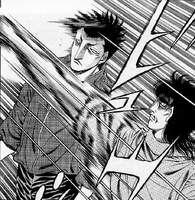 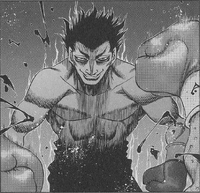 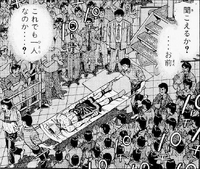 Sawamura getting carried out after Ippo's match

Sendō talking to Sawamura in the hospital 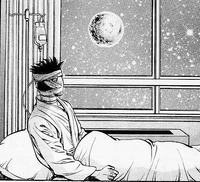 Sawamura looking at the moon
Add a photo to this gallery

Ippo vs Sawamura fight poster
Add a photo to this gallery 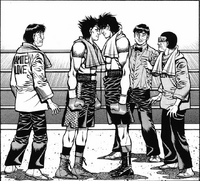 Sawamura weigh in for Mashiba
Add a photo to this gallery 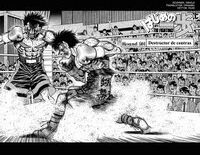 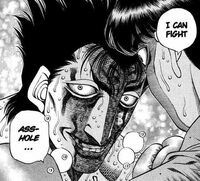 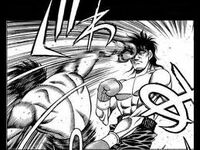 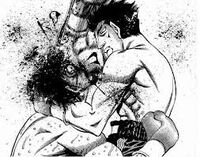 Sawamura adopting his unorthodox stance near the end of the second round. 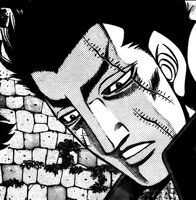 Sawamura's Scarred Face
Add a photo to this gallery 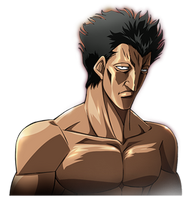 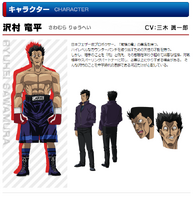 Sawamura's own technique called Bullet.
Add a photo to this gallery 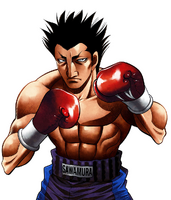 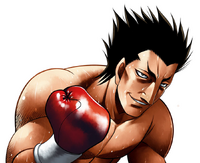 Profile 5
Add a photo to this gallery