The Second Coming of Death Arc is the thirty-sixth story arc in the series and the sixth in the Survival Match of Asian Champions Saga.

This small arc focuses on the Mashiba Ryō's return in the ring after being disqualified previously, facing the OPBF champion Aaron Domingo.

After Miyata's fateful match, and Aoki and Kimura's matches, early in the morning Takamura starts mocking them again for a while on purpose for a good cause, as Shinoda agrees on it. Itagaki says he has to get ready for the Class A Tournament so he heads off too, while Ippo leaves and meets up with Kumi Mashiba on his usual roadwork path. Aside the short conversation on boxing mostly about Mashiba Ryō's upcoming match, Kumi wants to say something else, or wants Ippo to make the first move, while cherry blossoms start falling. Ippo not expressing his true feelings just throws that he's thinking about boxing when asked by Kumi what if he's truly thinking right now and Kumi gets irritated as always. They both end up falling over a slide and Kumi and Ippo are on the brink of kissing until Wanpo barks because the Kamogawa crew appears and Ippo gets distracted, leaving Kumi to fall off. When they arrive, Aoki thinks they are sliding for fun down the hill. Afterwards they are back at the gym where Itagaki asks Ippo for a short par on the ring. Ippo feeling like he had accomplished something, he goes with full confidence. Only to realize Itagaki has actually improved far more than last time, Ippo nearly was punched multiple times.

Aaron headbutting Mashiba during the match

Mashiba turns things around with the Anti-In-Fighter uppercut 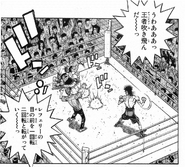 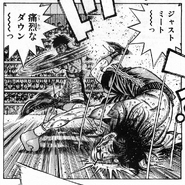