He is a former featherweight professional boxer from Okinawa, and was affiliated with the Okinawa Seaside Gym. After retiring he continued being a fisherman.

He was Makunouchi Ippo's fourth challenger, whom was first to find a way to break his Dempsey Roll and was the first opponent in the Rising Saga.

His surname is Shimabukuro. In Japan, surnames are listed before given names.

Known as the "Ryūkyū Warrior", Shimabukuro hailed from a small fishing village in Okinawa. As a man of the sea, his main occupation was being a fisherman, and was very well known as one. His body had grown strong from being in this environment. He later started boxing at the Okinawa Seaside Gym.

Starting his boxing career winning by knockout in his matches, Shimabukuro entered the West Japan Rookie King Tournament. After the winning first round, Shimabukuro faced against Sawamura Ryūhei in the second round. Shimabukuro was toyed around by Sawamura for four rounds. Shimabukuro lost by decision after the four rounds.[2]

Shimabukuro was set to challenge the JBC featherweight champion, Makunouchi Ippo. When his title match loomed closer, Tokyo reporters Fujii Minoru and Īmura Mari arrived at his hometown of Okinawa. Shimabukuro went to talk to them, assuming they want to know about how he would defeat the Dempsey Roll. While his coach revealed to them that it was his own words and not Shimabukuro, Shimabukuro claimed that defeating the Dempsey Roll would be seen as defeating the champion himself. He then explained that he would take on the Dempsey Roll instead of simply stopping it, making the match a battle of endurance as he planned to exchange with the technique. Later, Shimabukuro expressed his excitement about the title match with his coach, deeming the match a fight between men of the sea.

Later, Shimabukuro travelled to Tokyo, wanting Ippo to show him the ocean. He met Ippo at the Makunouchi Fishing Boat and asked to let him see the ocean. Ippo then showed him the Tokyo Bay, however, Shimabukuro was not pleased with the state of the polluted ocean, removing Ippo's title of "man of the sea". Shimabukuro began to walk away depressed that the match was no longer a fight between men of the sea until saw Makunouchi Hiroko. Shimabukuro proceeded to smell her and recognised her as a woman of the sea, making Ippo a man of the sea. He then left, warning Ippo that he would take him to the bottom of the sea in the ring. Shimabukuro went to the Nerima Boxing Club, defeating multiple sparring partners.

Shimabukuro went back to Okinawa and trained with his coach by punching a sandbag while holding his breath for 10 metres worth, he then aimed for 20. When it was his time to go back to Tokyo, Shimabukuro's parents and others on the island gave their hope to Shimabukuro to win the match. Shimabukuro then arrived to the Kōrakuen Hall in Tokyo for his weigh-in of which he passed. He was then surprised when Ippo accidentally took all his clothes off for his weight check. Shimabukuro commented on Ippo's "python" and then shook his hand with him, aiming to take his belt. After leaving the hall, Shimabukuro expressed his desire to take the Japanese title and a second title that he would keep to himself, betting on his seamen's pride. The next day, Shimabukuro arrived back to the hall for his title match against Ippo. In his changing room, he warmed himself up by mitt punching for a whole round worth. When it was time for his match, Shimabukuro arrived to the ring and the match began.

Shimabukuro rushed toward Ippo and was hit with by Ippo, who used his reach advantage. Shimabukuro managed to get to Ippo's chest and they both failed an attempt to hit each other, however, their arms crossed and Shimabukuro lifted Ippo up off his feet with pure strength. Shimabukuro then pressured Ippo into a corner while dodging his left jabs. They have an in-fight at the corner and during which, Shimabukuro sent out a Gazelle Punch, blowing away Ippo's Cross-Arm Block. Ippo switched to only blocking until his block began to weaken, deciding to push into Shimabukuro, shoving his head up to create an opening to punch. The two then entered a hitting match too close to dodge, shifting their weight enough to throw punches with power until the first round ended.

Ippo and Shimabukuro had a continuous close ranged hitting match up to the fifth round, going accordingly to Shimabukuro's plan as Ippo had difficulty breathing and his face turned purple from cyanosis. Ippo blocked his face, thinking Shimabukuro will aim to finish the match, however, Shimabukuro aimed for Ippo's body. Ippo was hit many times by the body blows and unable to defend himself or catch his breath until the fifth round ended. Shimabukuro informed his coach that Ippo was now at the bottom of the sea, planning for him to be like a sunken ship in the next round.

In the seventh round, Ippo, after throwing a weak punch, immediately got pushed to the ropes and proceeds to guard against a barrage. Shimabukuro launched a Gazelle Punch in an attempt to break Ippo's guard, however, Ippo placed his right hand over his jaw to avoid a direct hit. Shimabukuro sent out another Gazelle Punch, this time with more power, which Ippo blocked with a Cross-Arm Block. When ippo lost his balance from his own momentum while punching, he gathered enough strength to throw another punch, which Shimabukuro decided to take as Ippo's punches have weakened, planning to counter afterwards. Shimabukuro lost his balance from the seemingly weak punch. Shimabukuro regained his balance as Ippo motioned his Dempsey Roll. Ippo used the Dempsey Roll and exchanged blows with Shimabukuro until Shimabukuro was sent down with a full-body Dempsey Roll blow. Laying on the canvas, Shimabukuro realised that the match was never a match between seamen, as Ippo is a pure boxer. While Shimabukuro took a fighting pose, he was unable to stand up before the count of ten, resulting in Shimabukuro's lost.

Shimabukuro approached Ippo at the hall afterwards and revealed his plans to leave for Okinawa the next day and that he is retiring to protect the reefs from the impending customers as summer was about to begin. Shimabukuro left after telling Ippo that he should live by the ring and if he ever goes to Okinawa, to give him a call for a swimming contest.

Shimabukuro is a man with tanned skin, short messy black hair, and a small amount of facial and chest hair (chest hair absent in the anime). Though even shorter than Ippo, his body is like a steel fortress, bulky and cabled with muscle. He has a very thick and strong neck, helping him take powerful punches to the face. His rough appearance (like a fisherman) sometimes make people assume he's older than he looks despite only being in his early twenties.

Despite his rough appearance, Shimabukuro is a polite and friendly, albeit prideful fisherman. He boasted that he would be able to defeat and endure Ippo's Dempsey Roll even before they've fought; this indicates he is very analytical of his opponents long before they fight.

As someone who was raised with blue skies and blue water, Shimabukuro can experience homesickness if he's gone from the ocean for days, causing him to feel low in spirit and lose focus during spars. He felt anger when he saw how dirty Tokyo Bay's water was. He can behave strangely at times, as seen when he sniffed Hiroko and asked if she was a woman of the sea. Upon realising that she was, and thus Ippo was a son of the sea like him, Shimabukuro boisterously laughed and said that he looked forward to fight Ippo. He envisions the actual fight as a battle between sons of the sea, until it became clear he was fighting in a ring, not in the water. Realising this too late, he illustrates his pride being shattered as Ippo delivers his finishing blow.

He showed great sportsmanship when he approached Ippo shortly after their fight to thank him, shake his hand and compliment his boxing skills.

Shimabukuro is a in-fighter who is even shorter than Ippo. This mean he has to step for the close range for his fights. His body is cabled with muscles that give him great power. He has great punching power, where even Ippo admits that Shimabukuro's power is greater than his, but the Ryukyu warrior isn't as fast as the latter. Shimabukuro is shown to be extremely durable, showcased when he took on Ippo's Dempsey Roll head on by hitting simultaneous punches against it. The seaman's greatest attribute is his stamina. He is able to hold his breath under water for 14 minutes, and his stamina outlasted Ippo.

Shimabukuro's is a in-fighting expert. Thanks to his layers of muscle he never doubts his raw strength, but only wants to engage the opponent by either turtling and blocking everything or a non-stop infight. He's a careful fighter who will keep slowing down the opponent with as many body blows as possible. He aims to not only kill their legs but have them completely exhausted and unable to move, and will take almost any blow moving towards that goal, as he views boxing as a contest in stamina. He was capable of weight shifting during his fight against Ippo in their zero distance battle with each other. Coach Kamogawa stated that the Ryukyu warrior was a boxing genius equal to that of Miyata.[citation needed]

Like Ippo, Shimabukuro's short height means he cannot use hit and away tactics at all; he always has to press forward to enter an in-fight. Out-Boxers are his natural enemy.

He lost to Ippo after trying to trade punches with Ippo during the Dempsey Roll; Ippo's endurance proved greater than Shimabukuro's. 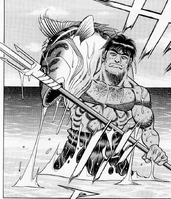 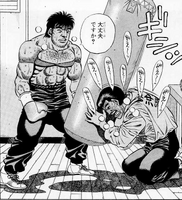 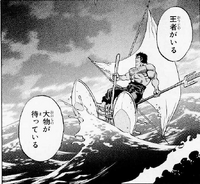 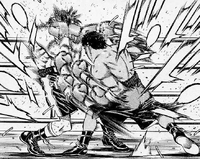 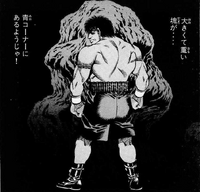 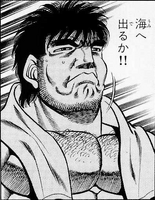 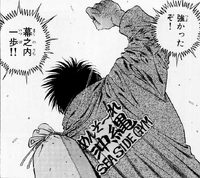 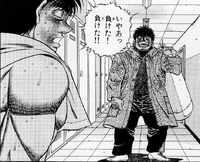 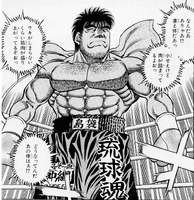 Start of Shimabukuro vs Ippo 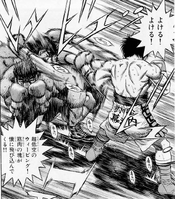 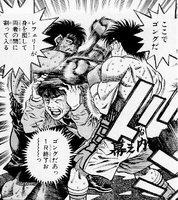 Ref trying to stop them 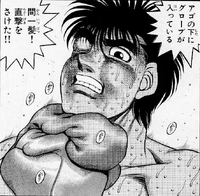 Ippo blocking with his glove 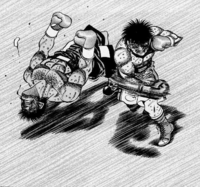 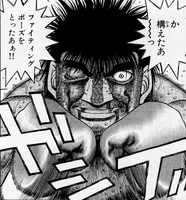 Shimabukuro as a fisherman

Shimabukuro getting punched by Ippo.

Shimabukuro getting inside with Ippo.

Shimabukuro's Gazelle Punch
Add a photo to this gallery

Retrieved from "https://ippo.fandom.com/wiki/Shimabukuro_Iwao?oldid=73316"
Community content is available under CC-BY-SA unless otherwise noted.