Wiki Ippo
Register
Don't have an account?
Sign In
Advertisement
in: Characters, Male Characters, Characters from Japan,
and 8 more

JBC Lightweight Champion
Shinobu Iga (伊賀忍, Iga Shinobu) is a lightweight professional boxer and the JBC lightweight champion. He is the main goal for Aoki Masaru, as he holds the urge for revenge for being defeated by him, and also to obtain the belt.

When Iga first started boxing, he made only decision wins for his four matches. However, when Kurita Baron became his trainer, he began to have a string of knockouts.

When Iga entered in the lightweight Class A Tournament, he was faced against one of the favourites of the tournament, Katsutaka Imae. As the match arrived, Iga went to the Kōrakuen Hall. in the match, Iga effortlessly defeated Imae by knockout in the first round, resulting in an upset.

For the Class A Tournament finals, Iga's opponent was against Aoki Masaru. Iga quickly showed his intentions by knocking down Aoki in the first seconds of the match. Aoki managed to get back to his feet only for Iga to nail him again. The first rounded ended with Iga's complete domination. As the match continued, Iga kept beating Aoki with ease, despite the latter's attempts to use his trademark moves. He continued pounding Aoki with no intention of finishing him off, only to make him suffer as instructed by his trainer, Kurita Baron. Tomiko, who was watching, couldn't help but cry and scream in sight of her loved one beaten so badly; Iga called her an ugly pig, much to Aoki's frustration. In the seventh round, Iga asked Baron if that was enough, and Baron gave the okay for him to finish Aoki off. Iga proceeded to end the fight, knocking out Aoki, and at the same time Shinoda threw in the towel. With this victory, Iga won the Class A Tournament, subsequently becoming ranked first in the JBC ranking and earning the right for a title match.

After the match, in the corridors of the venue, Iga saved Baron from Takamura Mamoru by grabbing Takamura's arm as he was about to hit Baron. In response, Takamura grabbed him by his hair and pushed him into Baron. Before leaving, Takamura warned them that their actions weren't going to stand and that the day would come where they would whine like dogs.

With Iga being ranked first, he was to challenge the JBC lightweight champion Ōshima Sōshi. When his title match arrived, Iga went to the Kōrakuen Hall for the match. Before the match began, Baron reminded Iga of the new trunks he got for him after telling sponsors that they would be sponsoring the future world champion, demanding Iga to not mess up on getting the national title for him. The match began with Iga unable to keep up with Sōshi's speed, getting his attacks dodged while aiming for the body through the first five rounds, but not taking major damage either. In the sixth round, Iga continued his repeated tactic of throwing body blows that hit Sōshi's guard, while blocking Sōshi's counter attempts that get closer at landing as the match continues. Just as Sōshi got Iga's step-in timing when he throws a body blow down, Iga stepped in and hit Sōshi's jaw instead, causing Sōshi to go down. The referee immediately ended the match, resulting in Iga becoming the JBC lightweight champion. For the victory interview, Baron took over for Iga, claiming how he wants to make Iga into his image of an ideal boxer.

Iga was specifically chosen to fight the OPBF lightweight champion, Mashiba Ryō. After meeting Mashiba in the weigh-in, Iga went to the Kōrakuen Hall the next day when the match arrived. When the match began, Iga walked towards Mashiba, who was using Hitman Style. When he got in range, Iga was grazed by a Flicker Jab. Out of range, Iga stopped moving forward after learning Mashiba's unexpectedly long range. Baron, knowing that Iga's emotions are the reason for him stopping, signalled Iga for him to turn his emotions off. Iga turned his emotions off and proceeded towards Mashiba. Having walked in range, Iga braced himself and was hit multiple times by Flicker Jabs. Iga entered the Peek-a-Boo Style and began to dodge and block Mashiba's Flicker Jabs as he pressed forward. When Iga got into his own range to attack, Mashiba threw a Chopping Right that missed. Before Iga could counterattack, he was hit by an uppercut, causing him to go down.

When Iga showed pain as he began to get up, Baron signalled for his emotions to turn off. Iga got up and, when the match continued, got his guard battered by Mashiba's Flicker Jabs until his guard broke. With Iga's back to the ropes, Mashiba prepared for the final blow, however, Iga threw a weak left body blow and attempted to throw his right before Mashiba noticed and stepped back. Round one ended, and at Iga's corner, Baron denied Iga's access to water to rinse and got struck across the face by him for embarrassing him. After Iga was reminded that Baron was the reason for his success, round two began. Iga entered into the Peek-a-Boo style as he charged to Mashiba who repeatedly hit him with Flicker Jabs. When Iga got close, he initiated the Dragonfish Blow, however the overhand was dodged. As their heads are close to each other due to their motions, Iga swung his head up while purposely headbutting him in the jaw purposely. Iga then began using fouls such as hitting with his elbows and headbutting during clinches, making Mashiba angry. When round two ended, Iga went back to his corner, where Baron was pleased that Mashiba's fuse had been lightened.

After being instructed to make Mashiba even more angry in order for Mashiba to snap and get disqualified, Iga arrived at the centre of the ring as round three began. Iga began to abuse Mashiba's three weaknesses by first going into the Peek-a-Boo style and charged towards Mashiba. Iga was cleanly hit by Mashiba's Flicker Jabs multiple times until Iga got into close range and is hit by a Short Uppercut. Iga attempted to use the second weakness, the Dragonfish Blow, however the body blow was blocked by an Elbow Block, and the Overhand was countered by a short hook. Iga then used the third weakness, fouls, however the headbutt was dodged, and the elbow was parried and countered. Iga was then hit multiple times by Flicker Jabs until Iga went down and the referee stepped between them. The referee decided to end the match, as Iga was unable to continue. Defeated, Iga walked away from the ring with the Tokugawa gym's coach, while Baron was not there with him.

Grim Reaper to the World Arc

On the day of Mashiba's world title preliminary match against Juan Garcia, Iga went to the Kōrakuen Hall. He watched Mashiba's match against Juan, which ended in Mashiba's victory by knockout in the seventh round. Iga came across Ichirō Miyata as he was leaving, commenting to him that the counter Juan threw missing and the deciding Chopping Right landing was mere luck on Mashiba's part, scoffing at the idea of Mashiba taking on the world title at his current level. Miyata countered, pointing out that Juan's legs were affected, knowing from experience that the counter would have never landed, and that after seeing Mashiba's body blow and him knowing the effects of accumulated damage, it is difficult to think Mashiba is only at "his current level". Iga asked Miyata if he is okay with Mashiba going higher without a chance of redeeming the humiliation Mashiba did to him. Miyata replied that he hopes Mashiba keeps going higher, to something one can also seize for themselves.

Iga is a lean, well-built man of average height. He has black eyes, long and thin black eyebrows, and black hair with bangs that partially covers his forehead, which he later grows out. He has a prominent rectangular nose and narrow eyes that give him a perpetual look of boredom regardless of the situation.

Iga is shown to be stoic and near void of emotion, rarely speaking or even displaying a change in demeanour. He is characterised by his bored and lazy expression as well as an eerie amount of calmness (or airheadedness) solidified by the fact that he rarely bothers replying to his trainer during his class-A tournament match against Aoki.

It is implied both indirectly and through Takamura Mamoru that Iga is unbelievably loyal to Kurita. As seen in chapter 976, Iga protected Kurita by stopping a prepared punch from Takamura that would've landed should Iga not be there to restrain it. This loyalty is most likely conditioned from Kurita's brutal training regimes, which, as stated by Kurita, changed Iga from his 'soft' self to the immensely strong KO puncher.

Ever since he switched trainers to Baron, Iga's wins went from decision, to KO wins. Testaments of his boxing skills come during his fight against Katsutaka Imae, a former champion whom he KO'ed in matter of minutes, and in his match against Aoki Masaru, a seasonable veteran with skills equal to that of a national champion: he completely manipulated Aoki with eye and hand feints, something that never happens unless there is a huge gap in skill between boxers.

By a signal from Baron, Iga is able to completely turn his emotions off. This gives him the advantage of being able to walk towards his opponent without fear of taking hits. Even when taking hits directly to his face, his facial expression will not change. This can eventually wear out, however, with Iga able to show pain again.

Iga is able to successfully use the Peek-a-Boo Style, being able to block power techniques such as Flicker Jabs. 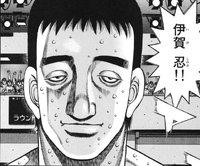 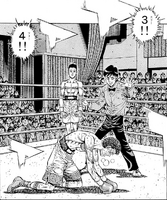 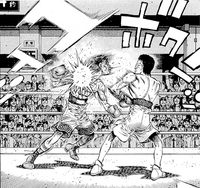 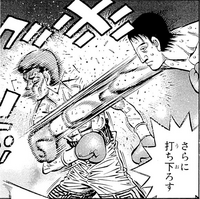 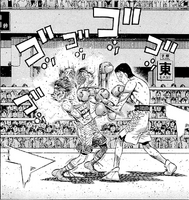 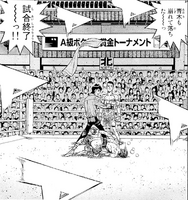 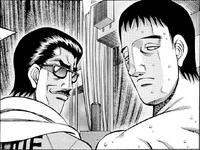 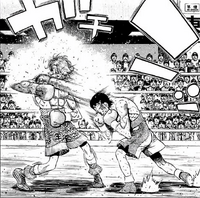 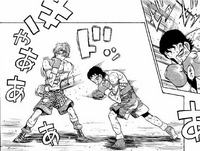 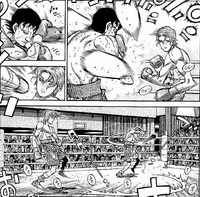 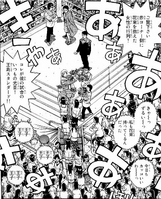 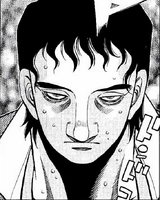 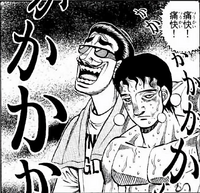 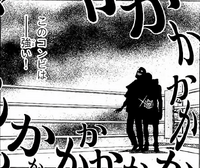 Baron and Iga stronger together 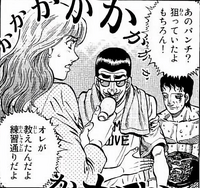